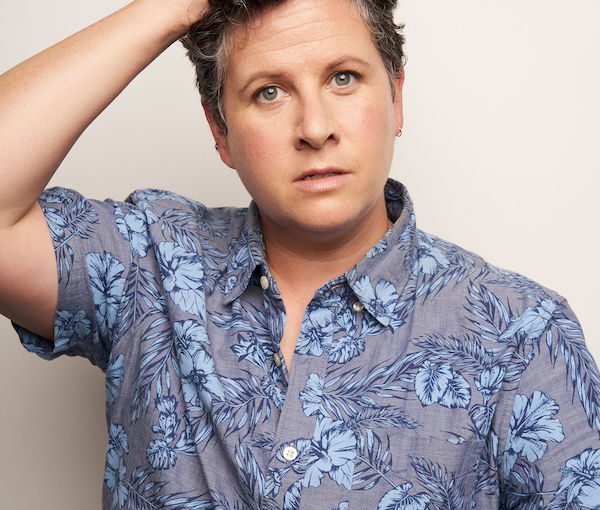 Based in New Jersey, Glazer is an award-winning comedian. Before taking to the stage as a career – and engaging in other creative endeavours, including acting and writing – she was a tenured law professor.

Of comedy, Glazer said, “I never intended to get into it. I had a crush on a woman who asked if I ever thought of doing comedy (no) and said she would put me on her show (to which I initially also said no, then realized she would probably be at her own show, so I said yes). I loved it so much from that first performance, and I think what I loved about it wasn’t even the laughs or attention or even that this woman I had a crush on was in the audience, though all of those things were nice, but that all I had to be to do it was me.

“I enjoyed teaching law, but there was always something about it where I had to fit what I wanted to say or write about into a framework of legal analysis. I had to have the topic of whatever I was saying or writing be the law, not just my own life, because there would eventually be something like a bar exam. When I did comedy, all I needed to talk about was myself. Though I should note: after all of my shows there are exams, so audience members should be prepared for that.”

Glazer’s first comedy performance was on March 5, 2013. She admitted to having been “a wreck.”

“I wrote stuff to say,” said Glazer, “but had the thankfully correct instinct that it wouldn’t connect with the audience or be funny or good, so I called a friend with experience performing comedy and she told me to just say something vulnerable to the audience at the beginning of my set.”

Thinking she got the message, she hung up before realizing she didn’t know how to be vulnerable.

“They don’t teach you how to do that in law school,” she said. “So, I paced around a bunch trying to think of something vulnerable to say, couldn’t really think of anything, then headed to my front door to leave for the show…. I see a package at my front door, and I hadn’t ordered anything.”

With time to spare before the show, Glazer brought the package inside. As she was about to open it, she said, “I realize[d] a trick to being vulnerable is not knowing the answer to something, and I didn’t know what was in the package, so perhaps the vulnerable thing I could do to start my set would be to open the package on stage. So I did.

“Turns out the package was from my mom, who had visited my apartment a couple weeks before and noticed that my white fluffy cat Mona – who would climb to the top of my closet – was shedding her white fluffy fur on my dark suits I would wear to teach class, making me look like a white fluffy law professor. My mom said I should buy vinyl suit covers … [but] knowing I wouldn’t, she ordered me three packs of six of them and sent them to me without my knowledge. So, my first set ever began with my opening this package on stage and explaining to the audience my relationship with my mother and my cat Mona, and how I’m a law professor who teaches class with white fluff all over my suits. And it worked! I think because, even though I had no idea how to do comedy, I couldn’t not be myself because I was genuinely reacting to what was in that package in the moment I opened it for the first time along with the audience. And/or because, as a rule, vinyl suit covers are very funny.”

Glazer no longer relies mainly on improvisation, but it still is an important part of her act.

“I do write a lot of jokes,” she said, “and much of my shows consist of prepared material but also improvising is everything, to quote the great Joan Rivers (in a very short interview I saw somewhere and am not sure where). Live comedy, whether it’s written down ahead of time or not is, by nature, dependent on interaction and connection with the audience which is, by nature, improvisational. So, to prepare for a show, I make sure I know what I want to say – sometimes a set of things and, more often, one big idea I want to get across – and I annoy my wife for a few hours repeating it aloud while she tries on clothes and asks me if I like them. And I try to meditate before [a show] because the key ingredient for me is clearing my focus so I can be present with the audience in the moment. That’s really the stuff. Connection and clarity.”

“I was raised going to Orthodox Jewish day school, a Conservative synagogue, and I’m now married to a Reform rabbi, so I think that makes me Chassidic,” Glazer joked. “I do talk about being Jewish in my comedy, and I do comedy for Jewish organizations and synagogues frequently. I talk about being married to a rabbi and, when I do comedy for Jewish audiences, I talk more extensively about my upbringing and how I learned in school all of these rules about what not to do, then lived in a house where we ate pepperoni pizza on trayf silverware on Shabbos.

“At an even deeper level,” she said, “my lineage consists of four out of four grandparents who survived the Holocaust. Not to brag, but it’s true. And I think of them constantly when I do comedy, especially when it’s explicitly about being Jewish and especially now as antisemitism is on the rise, unfortunately. There’s always a fearful part of me that wonders how much to talk about being Jewish in situations where there might be antisemitic people in the audience or if I post a video that may spark antisemitic comments, but I think of my grandparents in those moments, too. I think, if they survived for me to not be loudly Jewish, what was the point?”

Glazer doesn’t shy away from who she is or what challenging circumstances she has faced.

“I’m recording an album soon called Still Born Sorry, about grief and trauma and stillbirth (and it’s funny!) that will be an audio album available wherever you get your music and such, and also part of a documentary film about how I was supposed to record an album and have a baby last year, and neither of those came to fruition when I thought they would. That prior album was supposed to be called Born Sorry, and was postponed due to a stillbirth, so this one (the album and the documentary) will be called Still Born Sorry, which may be the best pun I definitely did not intend.”

In addition to the Nov. 24 performance at Chutzpah!, Glazer will be leading a two-hour workshop on the afternoon of Nov. 25. Participants will explore their “personal experiences, opinions and overbearing family members to find funny material to bring to the stage,” as well as setting up a “punchline joke structure and what it means to find a comedic voice.”

For anyone a little nervous about trying to seek out that voice, Glazer said, “I adore nervous people, so I really encourage especially those who are, to come to the workshop.”

Glazer encouraged readers to check out her website, dearlizglazer.com, and send her “a nice email! I would love to hear from you!”

For tickets to Glazer’s workshop and any Chutzpah! performance, visit chutzpahfestival.com.