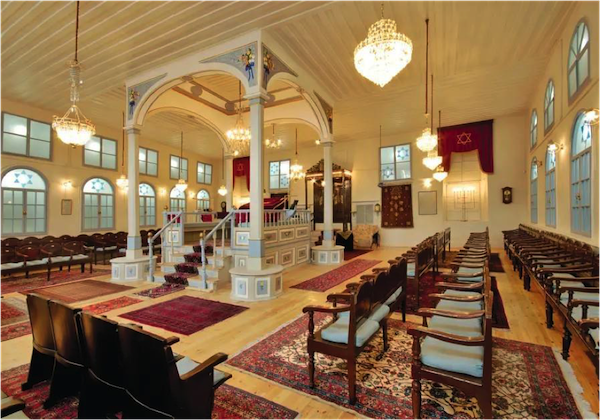 Algazi Synagogue was built in 1724 and has been renovated several times. (photo from Izmir Jewish Community Foundation)

The Izmir Jewish Community Foundation’s Izmir Jewish Heritage Project, for the preservation of Jewish heritage within the Turkish city, has started its activities. The project, financed by the European Commission, also has Our City Izmir Association as a partner.

Home to various cultures and religions, Izmir is one of the cities that has attracted Jewish immigration since ancient times. In the light of current data, the first concrete evidence of the Jewish community’s existence in the city dates to the fifth or sixth century CE. Sephardi Jews expelled from the Iberian Peninsula in 1492 and 1497 came to the Ottoman lands and settled in Izmir and its surroundings.

Since the middle of the 16th century, synagogues, hospitals, cemeteries and other institutions were established within the social, economic, cultural and administrative structure that started to form the present Izmir Jewish community. Most of the historical buildings that have survived to today are located in the Old Jewish Quarter, known as the historical centre and downtown of Izmir.

The Jewish population fluctuated after the 16th century due to earthquakes, epidemics, fires and global political, economic and sociological migrations. In the 1800s, Izmir was home to approximately 50,000 Jews, mostly Sephardi. A significant decrease in the population began in the early 1900s, when many people migrated to Europe and the Americas. Another massive outward move took place to Israel, after the establishment of the Jewish state in 1948. Today, the Jewish population of Izmir is about 1,100 people.

In parallel with the decrease in population, out of the city’s 34 synagogues, only 13 remained. With shrinking congregations, some of the synagogues were neglected and even disappeared over the years. In addition, seismic activity and environmental threats have put these structures in peril. As a result, all of the synagogues that have survived to the present day have to be preserved and restored.

Six of the nine synagogues in Kemeralti, the bazaar area at the heart of the city, tell the stories of centuries. Adjacent to one another and with their special architecture, they have unique value in the world. Currently, the area, consisting of the nine synagogues, one chief rabbinate building, five kortejos (courtyards) and the Juderia (Jewish district) creates a density of structures that is also of unique cultural and touristic value.

While the project is funded by the EU, the content is entirely under the responsibility of the Izmir Jewish Community Foundation.