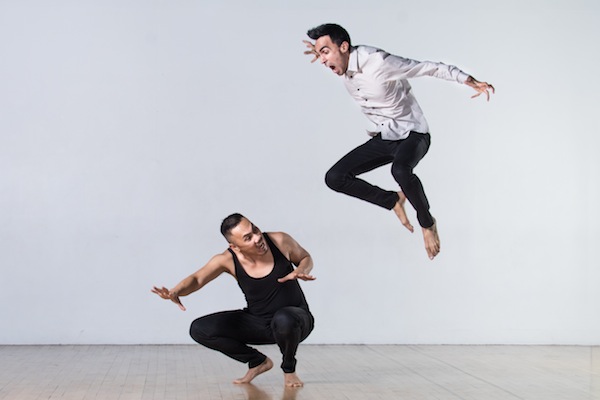 Dancers Alvin Erasga Tolentino, left, and Gabriel Dharmoo in Passages of Rhythms, in which Jonathan Bernard (below) is a percussionist. (photo by Yasuhiro Okada)

“Passages of Rhythms is inspired by a shared fascination with interculturalism, interdisciplinary activity, flamenco and collaborations between cultures,” percussionist Jonathan Bernard told the Independent about the Co.ERASGA production, which is being remounted May 19 and 20 at PAL Studio Theatre, in recognition of Asian Heritage Month. May is also Jewish Heritage Month.

“Canada is becoming well-known as an international centre of intercultural arts,” said Bernard, a member of the Jewish community. “I very much look forward to the remount and a bright future for the show on Canadian and international stages.”

Bernard was in the original production, which took place at the Firehall Theatre as part of the Dancing on the Edge festival in 2018.

“The creation process of Passages was very smooth, full of joy and dedication, and the result brought a standing ovation from an enthusiastic audience,” he said. “Alvin is a director with a warm heart, an open mind, and is a passionate artist, so I’m overjoyed to be part of the remount.

“This is a dream gig for me,” he continued, “as I caught the flamenco bug back around 2005, I’ve traveled to the birthplace of flamenco in southern Spain to study and I’ve happily spent countless hours collaborating with flamenco dancers at local flamenco venues and on the concert stage. Kasandra was my first flamenco teacher, and we have had an artistic relationship going back to the mid-2000s. One of our groups, Orchid Ensemble, collaborated with Kasandra’s and Oscar Nieto’s Al Mozaico Flamenco Theatre to create a show named after the famous Café de Chinitas in Malaga, where Frederico Garcia Lorca penned some of his most famous works.”

Another reason this is a dream gig for Bernard, he said, “is that I have the pleasure of surrounding myself with many of my favourite instruments, collected from 25 years of travel and study around the world, scouring through ancient temple and traditional markets for the best sounding instruments. For example, you will see/hear temple bells and opera cymbals from Beijing and Sichuan province; tuned gongs found in Thailand, Cambodia and Laos; the riqq (Arabic frame drum), handmade in Cairo’s old city; bells from India; and, of course, the cajon, a box drum adapted into the flamenco tradition in the 1960s.

“My compositional ideas that form the soundscape for Passages are not only inspired by the dancers’ movement,” he said, “but by the instruments themselves and the ancient styles traditions they represent. Further, as most often I am busy interpreting the work of composers, Passages gave me a chance to compose my own original music.”

Since the mid-1990s, Bernard and his wife and artistic partner Lan Tung have been creating intercultural ensembles, mixing instruments and instrumentalists from traditions ranging from Chinese, South Asian, Persian, Arabic, North African and Western traditions, creating original Canadian music, and touring internationally. “We looked to ancient centres of interculturalism such as the Silk Road and El Andalus for inspiration, and as reflections of our own unique cultural environment,” he said. “Andalusia was a golden age of interculturalism, where Jews, Muslims and Christians lived in relative peace and shared knowledge and cultural traditions, from architecture to music to the culinary arts.

“Since the birthplace of flamenco – approximately one hour by train to the ancient Mediterranean port city of Cadiz – was located in the heart of Andalusia, I believe flamenco was certainly shaped by the liberal sharing and mixing of traditions,” he said. “For example, the 12-beat time cycles that are of central importance to West and North African traditions are also deeply embedded in flamenco forms; the castanets and palmas (interlocking handclaps) can be found in the carcabas and rhythms of the Gnawa and Berber people of Africa; the Ashkenazi cantorial traditions must have influenced the passionate flamenco vocal style. It might be said that flamenco borrowed rhythmic elements from North Africa, melodic elements from the pre-inquisition Ashkenazi Ladino song, and with simple harmonic structures and the guitar from Europe.”

Passages of Rhythms’ May 19 and 20 performances start at 8 p.m. Tickets are $30 ($20 for students and seniors) and can be purchased at eventbrite.ca.