Bennett and Sally Shaywitz co-founded the Yale Centre for Dyslexia and Creativity. (photo from the Shaywitzes)

One out of five people has dyslexia. Yet, even with this many people affected, not every school tests for it. This can lead to feelings of self-doubt and frustration for the child who has dyslexia but doesn’t know it. Parents and teachers may also become frustrated and the result can be children losing confidence in themselves.

Sally and Bennett Shaywitz, both academic physicians, say there is a simple test available for anyone to use to see if they have dyslexia.

Bennett Shaywitz was chief of child neurology at Yale for approximately 40 years, before stepping down a couple of years ago to devote all of his energy to dyslexia. “I’m the Charles and Helen Schwab Professor in Dyslexia at Yale,” he said. “Charles Schwab is very philanthropic and very dyslexic, so I’m very fortunate that I’m his name share.”

“Together, Bennett and I founded the Yale Centre for Dyslexia and Creativity,” Sally Shaywitz told the Independent. “I also wrote the bestselling book on dyslexia, called Overcoming Dyslexia.”

It all began when she was asked by Yale to work with children with learning disabilities, as none of the other faculty wanted to do it. “They thought it was beneath them,” she said. “I said, ‘Sure, I’ll do it part-time.’ And then I became intrigued with these children I saw who weren’t reading and whose parents were beside themselves and very worried. So, I began looking into it. Bennett was studying more basic science in attention. He got intrigued, so we worked together.”

As the research progressed, she discovered that there were many children who had problems with their reading yet seemed bright. 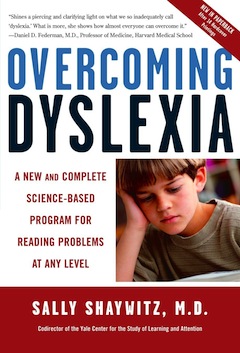 “Also, when I looked into it, they were studying children in schools and things, but there wasn’t a general study of a large population,” she said. “So, I started with the Connecticut Longitudinal Study. What differentiates that study is that it’s of a population, we work with a population statistician. We selected children from all over Connecticut and broke it into 14 towns. We invited all the children in kindergarten and, lo and behold, 95% of the ones we invited actually participated. That study is still going on. We are seeing those same people, about 375 of them, as adults, as 40-year-olds.”

The study started with 455 kids and 20% turned out to have dyslexia, while the schools had been under the impression that hardly any students were dyslexic.

“It taught me a lesson that I testified to the U.S. House of Representatives and the U.S. Senate,” she said. “It was that, to be counted, you had to be identified. Schools are not identifying kids, so they didn’t think they had any. Our data is very strong, and it goes along with data from the federal government that they’ve collected over the years. Dyslexia involves one out of five people – and we also discovered that it affects girls as well as boys.

“People used to say that it was just boys. What happens when people say that is that they only study boys. What we were able to do in the longitudinal study is we made up different instruments and validated them. One was a teacher instrument…. What we found was that, when boys and girls were tested, there were virtually equal numbers. But, when you ask the teacher about the child’s behaviour in class, they would say, oh, the boys were rowdy, pulling the girls’ hair, playing across the room, etc. And, the girls, they are so well behaved, but they never read a word. So, it was the boys that were sent for evaluation, because the teachers wanted to get them out of the room.

“We were able to show that dyslexia affects not only boys, but girls as well,” she said. “And, also, that it is persistent. It doesn’t go away. This study has made many major advancements.”

The Shaywitzes also found that, while, with non-dyslexics, reading and IQ are connected, with dyslexics, that correlation does not exist. This was in line with the very first description of dyslexia, in 1896, when a British physician referred to a young man who would have been the smartest in the class, if not for reading.

“People at the turn of the century really got it. They understood it,” said Sally Shaywitz. “But, over time, people stopped understanding it – deciding that, if you’re really smart, you can’t be dyslexic. So, what we were able to demonstrate is that, in fact, you can be very smart as well as dyslexic. The definition incorporates that dyslexia is an unexpected difficulty – unexpected, in that you can be very bright and yet read at a much lower level.”

The Shaywitzes said, due to such misconceptions, testing should be done as early as possible, around Grade 1.

“We developed a screener, called the Shaywitz Dyslexia Screen,” said Sally Shaywitz. “We gave it to Pearson Publishers, who I’ve worked with, wanting to involve teachers, as they know the child best and have mostly been ignored in a lot of these processes.

“There’s a kindergarten, Grade 1, Grade 2 or Grade 3 screening that has about 10 lead questions that the teacher responds to on a tablet. It takes five to seven minutes to get an answer as to whether or not the child is at-risk or not at-risk. You don’t have to test a kid and pull him out of his class or anything like that.

“So, the boys and girls start school and the parents say, ‘Oh, you’re gonna love it. You’ll learn to read. It’s going to be so much fun.’ Then, children enter school, waiting for this magical moment, and it doesn’t come. And, when they are called on to read aloud in class, the other kids giggle and make fun of them … and the teacher says, ‘How can you not know that?’ The kids lose confidence in themselves and begin to believe they are not very smart. That’s why children need to be screened and identified as at-risk very early on.”

Schools are way behind, she said. “Not every school identifies children with dyslexia.”

While the symptoms might improve, the person will always be dyslexic, she said. But, by identifying kids who have dyslexia early, parents and teachers can help the kids overcome their dyslexia in various ways.

The Shaywitzes have developed one tool, called the Key of Strength Model: Dyslexia and Creativity.

“In the case of dyslexia,” she said, “we have enough knowledge to do better. So, rather than a knowledge gap, we have an action gap. They have to implement the knowledge we have. It’s amazing that, in the 21st century, there is still so much misunderstanding of dyslexia that is harming so many.”