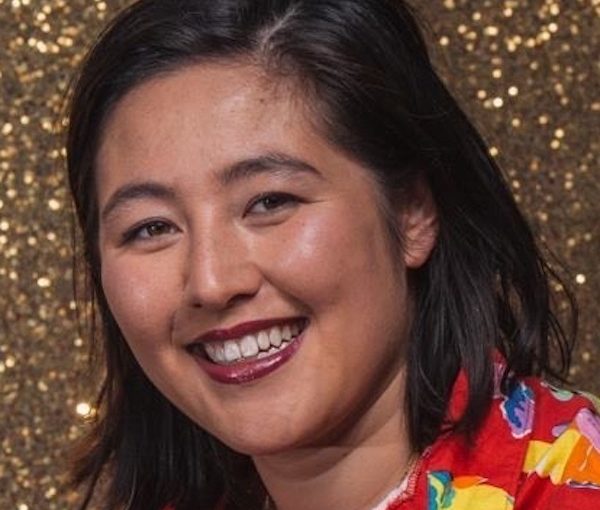 Brigitte May plays many characters in The Tragic Comedy of Macbeth, which runs Dec. 5-15 at the Jericho Arts Centre. (photo from Literary Larceny Artistic Collective)

“I love the spontaneity of it all. Improv is so magical because it can and will go anywhere,” actor Brigitte May told the Independent. “The agreement that improvisers have to commit to whatever has been established in the scene is such an amazing thing because, if done well, the scene can bear an undeniable truth in complete absurdity.”

May is part of the cast of The Tragic Comedy of Macbeth, which opens Dec. 5 at the Jericho Arts Centre. The production uses comedy, improvisation and the words of William Shakespeare to reveal more of the real Macbeth. It has its origins in a show envisaged by David C. Jones and created with the students of Langara College’s Studio 58 in 2014.

“As a professional improviser and actor, I have loved playing with existing stories and finding a way to make them more inventive and funny,” said Jones. “I was one of the original creators of a hit show that was remounted by several theatre companies (including the Arts Club) across Canada entitled A Twisted Christmas Carol. I also created an award-wining street theatre show called A Twisted Cyrano de Bergerac and toured England with a show called Twisted Anne of Green Gables.

“A decade later, I was approached by Kathryn Shaw, the artistic director at Studio 58, the professional theatre training program, to create a theatrical performance piece with the fourth-term students. We decided to do a partially scripted and partially improvised Macbeth. The premise of that one was very different and it was only one hour. It was narrated by the Porter, Hecate and Lady Lennox and they got the suggestions to change the show, and the focus was more of fixing ‘plot holes’ and problems with the original text. Although Shakespeare is brilliant, he does have some hiccups in some of his scripts.”

The Tragic Comedy of Macbeth is being staged by the Literary Larceny Artistic Collective.

“We are a group of professional actors and improvisers who came together specially to make this new expanded version of the show,” said Jones of the collective. “Now under the direction of Shakespearean actor Bernard Cuffling and veteran professional improviser Gary Jones, we have created this new slightly darker version.

“The real Macbeth (Mac Bethad Mac Findlaích) was actually a ruler of Scotland from 1040 to 1057 and was not at all like the man portrayed in Shakespeare’s play,” explained Jones. “He is trapped in the play in our production and he is trying to get free so he doesn’t have to suffer the beheading for the six billionth time. The witches in the play have agreed that, if he can derail the play and survive to the end, then his spirit can be set free. So, it is up to the audience to help him change the play to survive, or not.”

May plays many characters in The Tragic Comedy of Macbeth, but, she said, “the witch Hecate is the most prominent. Hecate is the queen of the witches, the mistress of charms, a very powerful expert of the dark arts, but she gets cut out of most versions of the play. In TCOM, Hecate seeks revenge for constantly being omitted and attempts to foil Macbeth’s plan.”

In improv, how much of the plot and action are laid out ahead of time depends on the show, said May. “In TCOM,” she said, “we have a fairly concrete structure. We are able to manipulate and play with it a little through audience suggestion, but David C. Jones and Brent Hirose (the writers of the play) worked hard to create a fascinating twist on a classic tale.

“Practising improv sounds like a joke, but it’s actually super-important!” she added. “Making sure your brain is warmed up to take whatever is being thrown at it, building trust with your castmates, and practising and learning the format that you’re performing are integral to the success of any improv show.”

In addition to being an improviser and actor – she has performed with Affair of Honour and Blind Tiger theatre companies and is a cast member of Instant Theatre’s Fistful of Kicks improv comedy show – May is a staff writer for the satirical news website, the Beaverton, and works in retail. She graduated from Queen’s University in Kingston, Ont., with a bachelor of arts (honours) in English with a film minor, but was born here.

“I am a first-generation Vancouverite,” she said. “My father and mother moved here from Ottawa and Manila, respectively, got married and raised my brothers and me on the west side of Vancouver.”

Intentionally or unintentionally, those brothers helped direct her to the stage.

“As a kid, I was always performing. I am the youngest in my family and have three older brothers, so I was always vying for attention and trying to prove myself,” she explained. “I wasn’t too much of a troublemaker (I feel like my brothers had that covered), but I would frequently get into fights if I were told I couldn’t do something because I was a girl. Still, my parents were supportive of my creative pursuits, they signed me up for dance lessons (at the JCC), music lessons and acting camps. I didn’t really start writing comedy till late in high school and into college, but I had been on my school’s improv team, which heavily influenced my love for comedy.”

As for the roles played by Judaism, Jewish culture or Jewish community in her life, May said, “The Jewish community has always been a part of my life. I have been a member of the Jewish Community Centre of Greater Vancouver ever since I was born. I remember swimming in the pool with my bubbie, and watching my dad and zaidie play racquetball. Now that I think about it, a lot of my childhood was spent running around the halls of the JCC.

“It was also where I was first introduced to performing. I had my first ballet lessons there – there’s actually a photo of me in the lobby of the JCC in my first-ever dance recital … we did The Little Mermaid! – then did a couple years in Gotta Sing! Gotta Dance! in my teens. I was even a counselor at Camp Shalom for a couple of years. The JCC was where I first was introduced to the arts, so I owe a lot to the community.

“In regards to Judaism and Jewish culture,” she said, “I find myself being drawn to it. Being half-Jewish and half-Chinese comes with a lot of ambiguity, so, when I was younger, I used to grasp at anything that gave me any notion of identity and history. My grandfather was a drummer and artist by trade, so, while my siblings and I might not have been the most educated in the religious aspect of Judaism, we were exposed to a lot of the cultural aspects. We would watch old Saturday Night Lives with Adam Sander, Mel Brooks movies, old(ish?) SNL with Andy Samberg, and were constantly being told jokes by our uncles. I think growing up having those comedians as my role models greatly influenced and shaped who I am today.”

The Tragic Comedy of Macbeth previews Dec. 4. Opening Dec. 5, it runs Wednesday through Saturday, 7:30 p.m., with 2 p.m. shows on Sundays, until Dec. 15. For tickets, visit tickets.theatrewire.com.