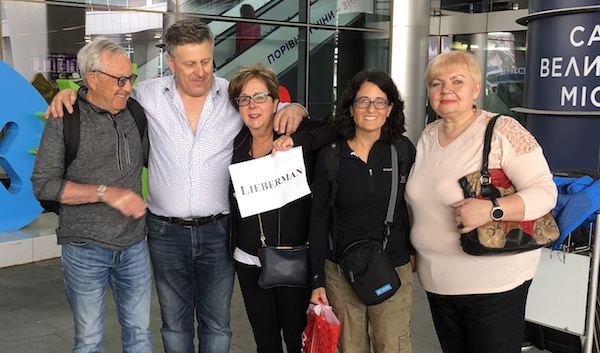 Left to right: Lucien, Grisha, Carole, Leanne and Svetlana at the airport in Kyiv, Ukraine, in 2019. (photo from Carole Lieberman)

My husband Lucien and I have been following the horrific invasion of Ukraine by Russia with particular interest. In 2019, we had the wonderful opportunity of traveling to Kyiv to meet Lucien’s first cousin, Grisha Lieberman, and his family.

Grisha’s father Sam had immigrated to Canada in 1923 and, after spending several years on the family farm in Rumsey, Alta., and later in Calgary, unfortunately Sam returned to Russia in 1928 to escort his parents, who were unhappy in Canada.

Sam had planned to return to Canada, but, after the war, ended up in the Gulag for close to 10 years. At age 57, truly a broken man, Sam met and married Rosa, a Jewish woman, and their son Grisha was born in 1958. We searched for the family for many years and finally contacted them in 2018.

Following our weeklong stay with Grisha and his wife Svetlana in May 2019, we formed a close bond. We are in touch with them often and enjoy regular Zoom visits despite language differences. Our daughter Leanne traveled with us on our 2019 visit, and we were all welcomed warmly.

Svetlana and Grisha have one son, Stanislaus, who is a lawyer in Kyiv. Their daughter, Tina Karol, a famous singer, performs at large concerts in Ukraine and travels the world to perform. Her tour to several U.S. cities, scheduled for this month, was recently canceled.

We follow details of the attack by the Russians on Ukraine closely and value every message that we receive from our cousins. Svetlana messages us regularly and writes that they are in the city of Ivano-Frankivsk, in western Ukraine, where they are staying in an apartment and have access to limited items. They did not want to leave Kyiv and did so only at the last minute by evacuation train. They categorically refuse to leave their cherished land of Ukraine.

She writes: “Fascist Russia wants to destroy our state, just as Hitler tried to destroy other countries in 1941. But Ukraine gives a worthy rebuff to the aggressor…. We believe that Ukraine will win back its freedom and that we will welcome you back to beautiful Kyiv.” She writes that they are getting used to the air raid strikes that occur two or three times each day. Their son Stanislaus is with them in western Ukraine, now in possession of a gun that was provided to him by the government to aid in Ukraine’s defence.

Their daughter Tina left Kyiv before the Russian aggression. When we were there, we clearly remember Tina telling us that she kept a suitcase packed in case of an urgent situation. She is currently in Warsaw; her 16-year-old son goes to school in England.

Last week, we watched with tears as Tina was interviewed on CNN. And, at a recent charity concert in Lodz, Poland, called Together with Ukraine, Tina was one of the performers. It was touching to see her sing with 7-year-old Amelia, who had previously sung “Let it Go” while hiding in a Ukrainian bomb shelter, before making it safely to Poland. Tina performed at a No War telethon attended by the leaders of European countries, the United States and Canada. And, on March 28, she performed in Israel at a charity concert, with funds being raised for medical needs.

We continue to pray for our family and for all Ukrainians, and for a peaceful resolution and a free Ukraine.

Carole Lieberman, a longtime Vancouver resident, is originally from Montreal. She is a mother of three, grandmother of four, and has enjoyed selling Vancouver real estate for 32 years. You can read her article about her family’s 2019 visit to Ukraine at jewishindependent.ca/meaningful-family-trip-to-kyiv.