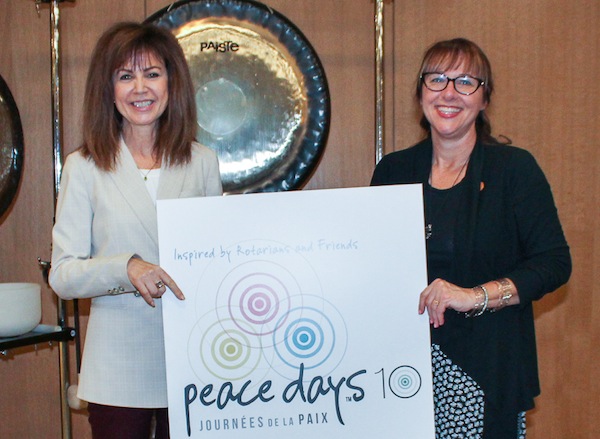 Earlier this fall, the annual Meditation for Peace took place at St. Boniface Cathedral in Winnipeg. Led by a group that is part of the Archdiocese of St. Boniface, the silent meditation was part of Peace Days this year and open to the general community.

Peace Days, which are organized by the Rotary Club and others, have existed for a number of years and there are all kinds of different events that take place, focusing on different segments of the population.

“Originally, a group of planners associated with the Archdiocese of St. Boniface came up with the plan and wanted to include it as part of the Peace Days lineup,” said Belle Jarniewski, president of the Manitoba Multifaith Council and executive director of the Jewish Heritage Centre of Western Canada, about the Meditation for Peace. The archdiocese group wanted to bring the Manitoba Multifaith Council into the event in order “to have representatives from all the different faith communities bringing prayers for peace as part of the event, and to take part in the water ceremony.”

The aim is to schedule the meditation not too far into the year, so that it could be held outdoors. “But, the last couple years, the weather brought us indoors,” said Jarniewski.

Despite being held on the night of the provincial election, Sept. 10, some 130 people showed up – people of different faiths, backgrounds, ages and genders. The event began with an introduction by the archbishop of the cathedral.

“He did a little introduction and presented tobacco to an indigenous elder, who also provided an introduction,” said Jarniewski. “We went into a 15-minute silent meditation with a gong player. There were a few circular gongs there, so everyone was invited to close their eyes, relax and meditate to the sound of the gongs. Then, we proceeded to the prayers.

“Then, I called up the representatives from I think it was 10 different faith communities, with each one presenting a prayer from their tradition. Sometimes, it was just something that they themselves composed and sometimes it was something like, for example, from the Jewish community, Dr. Ruth Ashrafi, who read out Oseh Shalom [A Prayer for Peace] and translated it.

“Then, after each person presented their prayer, they took a small glass of water and poured it into a larger recipient, symbolizing the unity of all humans and all traditions.”

Jarniewski heard from several attendees that they learned of the event from an article in the Winnipeg Free Press, by the newspaper’s faith reporter, John Longhurst.

For her part, Jarniewski said, “What I do is I reach out to my board members and I ask them if either they or someone they could designate from their community could take part in it. Often, they will designate someone else.”

The Manitoba Multifaith Council, which started up more than 50 years ago, began as an Ecumenical Christian group, which later broadened to include Jewish representation. “Eventually, it really broadened to include people of many different faiths,” said Jarniewski. Currently, there are two Jewish board members.

When Jarniewski first joined, Jewish Child and Family Service’s Al Benarroch was on the board. Now, Ashrafi heads up the education committee.