Valeri Sokolovski’s work forms part of A Tapestry of Cultures, the group art exhibit now on display at the Zack Gallery. (photo by Olga Livshin)

A Tapestry of Cultures opened last week at the Zack Gallery. Run in conjunction with Festival Ha’Rikud, which took place May 12-15, the group show also commemorates the birthday of Israel. As such, I expected it to reflect the blend of cultures that together make the multicultural tapestry of Israeli society, but the exhibit was much more global in scope.

With the exception of a few identifiably Israel-focused pieces – mostly photos by Avie Estrin – the rest of the artwork on display could have been created in any country, by an artist from any part of the world.

The Tel Aviv apartment building in Nancy Stern’s photograph wouldn’t be out of place in Vancouver or Prague. The sandals in a large painting by Rina Lederer-Vizer could have been lying on a beach in Spain or hiding under a park bench in San Francisco. The flapper dress from a small piece by Vladimira Fillion Wackenreuther could have been on sale in any fashion store from Moscow to Tokyo.

The exhibition as a whole announces that we all belong to one nation, cosmopolitan in the best sense, regardless of our country of citizenship or our mailing address. We live on the same planet and share similar values. 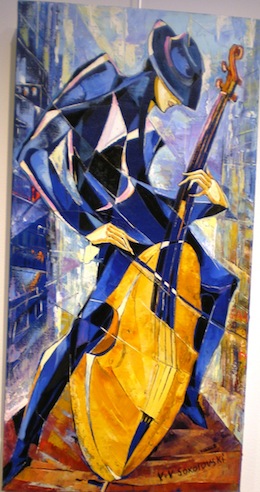 The theme of music and musicians appears in paintings by several artists in the show. Eternal and borderless, music wanders where it will, crossing barriers, especially now with the internet. Valeri Sokolovski’s images illustrate the concept perfectly. One could encounter his musicians almost anywhere. Their ethnicity is vague, but their passion soars in his paintings. Sokolovski’s musicians play with such intensity, the viewer can almost hear the notes, the syncopated beats and the soulful melodies.

In between his blue players, Karen Hollowell’s trumpeter introduces a much mellower tune, sunny yellow and flowing. The painting has a romantic quality. Her musician is not here on a street corner, but is somewhere else, behind the veil of imagination.

Not so with Iza Radinsky’s dancers. They strive to twirl off the wall and into the room, their skirts flashing, their feet performing to a jolly rhythm. The artist’s brushstrokes are blurry, but the dancers’ joy is crystal clear, and it transmits outside the frame, sprinkling everyone who passes the gallery.

In contrast to Radinsky’s dancers, Lauren Morris’ image is abstract and colorful, echoing the charm of dreams. Colors splash on the canvas in fanciful profusion and the viewer wonders, Is it a choir singing hymns? Is it a flock of birds on a wire, lost in their lofty trills? Or maybe it’s a flowerbed of exotic orchids, each one a song?

Meanwhile, a crowd of musicians populates David Akselrod’s “Gathering.” The painting is almost a metaphor of the show itself, gleeful and whimsical. The musicians are as cheerful and diverse as the artists who gathered for the exhibit’s opening. They play different instruments and have different skin colors, but they congregate in the same place, they mingle and laugh, and they share the delight of their art with each other and with the viewers.

The motif of unity – of all of us sharing, depending on each other – underlies Orly Ashkenazy’s “The Butterfly Effect.”

“It’s about the 12 tribes of Israel,” said the artist. She even inserted the names of the tribes in Hebrew into the painting. They intertwine with each other like a faint pattern of gold arabesques on a butterfly’s wing, a design mirroring real life, underscoring our own interconnections and effects on each other and the world around us.

It is impossible to mention all of the artists participating in the show in one short article, but all their creations complement and enhance one another.

“In my opinion, the calibre of work in this show is particularly high,” said Linda Lando, the gallery director.

A Tapestry of Cultures is on until May 29.