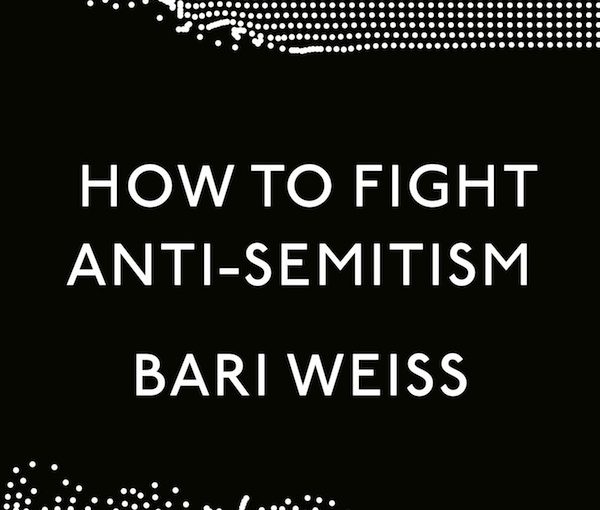 Bari Weiss, the New York Times columnist, grew up in Pittsburgh and so the shooting at the Tree of Life synagogue, in October 2017, hit even closer to home for her than for most Jewish North Americans. For many American Jews, she writes, it was the awakening after “a holiday from history.” It seems to have raised the question: Is the postwar reprieve from antisemitism coming to an end?

The majority of her tight, short book, How to Fight Anti-Semitism (Crown, 2019) is a litany of bleak, depressing anecdotes and statistics about the rise of antisemitic ideas and violence in North America and Europe. One imagines the title, which suggests action and optimism, being brainstormed by the publisher’s more upbeat marketing department over the alternative The Sky is Falling. But this is not to discount the value of the bleakness. It is a brief synopsis of rightful concerns around the political climate in the West in 2019.

The awakening, Weiss seems to acknowledge, was overdue. She recounts the 2006 kidnapping, weeks of torture and eventual murder of Ilan Halimi in Paris by a gang who assumed that, because Halimi was Jewish, he was also rich. As shocking as the ferocious crime, writes Weiss, was the response by the French authorities and the public, who largely chose to ignore the innately antisemitic nature of what had happened in order to retain a national self-perception that was challenged by the murder.

The consequences of what is happening, she warns, raise the stakes from the safety of Jews to the protection of the very idea of America.

“The object of our protection is not just the Jewish people. It is the health and future of a country that promised to be a New Jerusalem for all who sought it out,” she writes.

I am always disconcerted by the argument that, if we do not stand up for Jewish people when they are threatened, the enemies might eventually come for someone we actually give a damn about. But the evidence accumulates that this may be the best argument at hand.

Weiss summarizes the many antisemitisms – of left and right, of the Soviets and the fascists, of some Muslims and some African-Americans – even “Purim antisemitism” and “Chanukah antisemitism” (an interesting theory first advanced by the writer Dara Horn and it’s worth a Google). In brief, Weiss argues that the right of the spectrum considers Jews insufficiently white and not Christian, while the left contends that Jews are too white and overly privileged. Far-right antisemitism is more familiar, perhaps more clearly identifiable and is fought in partnership with what she calls Jewish people’s natural allies, liberals. Antisemitism on the left puts Jews in an especially challenging position.

She notes that the antisemitism and racism of Steve King, the far-right Republican congressman, is open to widespread criticism. “But criticize Women’s March leader Linda Sarsour for her repeated antisemitic outbursts? Criticize her and you are not just rendered racist and misogynist and an Islamophobe in league with Trump, you stand accused of putting her life at risk for trying to hold her accountable for promoting antisemitism.” (For her part, Sarsour two weeks ago declared that Weiss is “on the wrong side of history,” a statement so brazenly jaw-dropping that the publisher really should issue a revised edition of Weiss’s book just to include Sarsour’s latest.)

Weiss also walks into the lion’s den by making the equation between Muslim migration to Europe and increased antisemitic violence. And the stats she includes make challenging reading. A 2008 Pew poll indicated that 97% of respondents in Lebanon have negative view of Jews, followed by 96% in Jordan, 95% in Egypt and 76% in Turkey and Pakistan. She contrasts this with a 2015 Anti-Defamation League survey indicating that, in Germany, 56% of Muslims hold antisemitic views, compared with 16% of the general population. In France, it’s 49% to 17% and, in the United Kingdom, 54% to 12%.

When, at the end of the book, she actually gets to the nub of fighting antisemitism, Weiss outlines a number of strategies, few of which are novel but all of which are worthy.

She calls on Jews to maintain liberalism for the sake of a healthy democracy, to support Israel, which includes demanding that Israel live up to its ideals, to “lean into Judaism” and “tell your story.”

Most of her recommended ways to fight antisemitism presume that the reader is Jewish. This may be a fair assessment on the author’s part, but a non-Jewish person seeking to be an ally, who would find plenty of motivation in the first part of the book, will not find much actionable advice in the last short section. It should not, of course, be left only to Jews to fight antisemitism but, like the pragmatic decision to argue that the safety of Jews is a prerequisite to the safety of the entire society, it is probably a reasonable assumption at this point to accept that Jews are the most likely to do so. Which may simply underscore the problem her book is intended to confront.