In The Remains of Love, her latest novel to be translated into English, Zeruya Shalev once again explores (and crosses) intimate emotional boundaries. In this novel, however, she also overtly explores territory that she has actively resisted – Israel, where she was born and still lives.

“In my previous works, I avoided relating to the Israeli reality in a straightforward way,” Shalev told the Independent in an email interview. “The readers could have sensed it only indirectly – through the reckless pace, the intensity and perhaps even the pessimism. In this book, however, I felt an urge to open more windows to the Israeli reality – such as the history of the kibbutz and the burning issues of human rights. Each book has its own needs. Many issues that did not fit right in the previous books with the previous protagonists found themselves fitting perfectly into this one and its characters; this is because the Israeli reality affects them in a deeper and a more profound manner. And yet, still I am wrestling with the dominance of this reality, and try not to let it take over my books – it’s enough that it controls my life.”

Shalev included a winking emoticon after this last comment, indicating that the remark should be taken with a grain of salt, or at least not as seriously as it reads. She has an engaging manner and a sense of humor, which comes through in her writing (amid the serious, emotional and provocative material) and especially in interviews (there are several available on YouTube). In addition to her talent as a writer – her novels are critically acclaimed and have garnered various awards – Shalev is a thoughtful, friendly and relaxed interviewee. She is a great choice to launch this year’s Cherie Smith JCCGV Jewish Book Festival on Nov. 22. 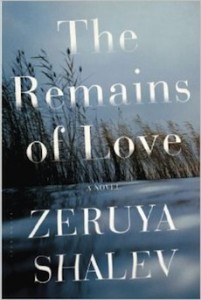 The Remains of Love (Bloomsbury, 2013) centres around a dying woman, Hemda Horovitz, and her two adult children, who each have families, foibles and problems of their own. Her favorite, Avner, is a human rights lawyer; he is questioning everything about his life, whether he has made a dent in the inequality and injustice in the world, as well as his relationship with his wife and sons. Hemda’s daughter, Dina, has devoted herself to her own daughter, Nitzan – giving her the love she never received from Hemda – but, like most teenagers, Nitzan is pulling away, so Dina looks to adopting a child to fill the void, even though her husband and daughter are against it.

The focus on three protagonists required a change in style for Shalev.

“In my previous novels, I concentrated on one protagonist, and followed her stream of consciousness in the first person, which creates immediate intimacy,” she explained. “The first person traps the readers in the inner world of the character, and even when he or she depicts other characters, they often seem like a projection of his or her own qualities. In this book, I wandered between three minds, three streams of consciousness, and the third person enables me much space and flexibility. At first, I was afraid that the third person might hurt the intimacy of the voice, but in retrospect it seems (or at least I hope) it didn’t. The first person is completely monogamous, and the third person gives you more freedom, which I and my protagonists needed for this book.”

The literal translation of the novel’s title is “the shards of life.” In the French version – and perhaps in other languages, too – chayyim is translated as “life.” However, Philip Simpson, who does a skilled job of translating the book’s content, style and emotion, chooses the word “love.”

“The French title of the book is more loyal to the original title in Hebrew (The Remains of Life) than the English one,” acknowledged Shalev. “Yet my English publisher (in the U.K. and U.S.A.) turned to me and explained that this name does not possess enough beauty and lyric in English; I therefore agreed to change it. We tried together to find a new title that would fit the themes in the book, and also be of poetic value, and this is how we got to this name. It is indeed interesting to realize how easily one can substitute the word ‘life’ for the word ‘love.’ All three protagonists of this book are indeed longing for love, all are experiencing it as a drug-of-life, each in their own unique way. Life without love seems to them tasteless, and they are all willing to go a long way to find it; not only in the footsteps of romantic love, but the love for a child, a brother, for life itself.”

Shalev’s Vancouver visit is part of a tour that begins in Houston and which also stops in Detroit, New York and Chicago.

“Unlike the dozens of tours I have done in Europe, I haven’t had many professional visits in the U.S. and Canada,” she said. “I am very much looking forward, especially to seeing Vancouver, which I heard is amazingly beautiful. As someone who has lived her entire life in a warm and desert land, I admire the cold weather, the mountains and lakes.”

The Sol & Shirley Kort Author Series will feature Zeruya Shalev in conversation with the Globe’s Marsha Lederman on Nov. 22, 7:30 p.m., in the Rothstein Theatre. Tickets ($20) are available from ticketpeak.com/jccgv or the Jewish Community Centre of Greater Vancouver, in person or by calling 604-257-5111. For the full Cherie Smith JCCGV Jewish Book Festival lineup, visit jewishbookfestival.ca.