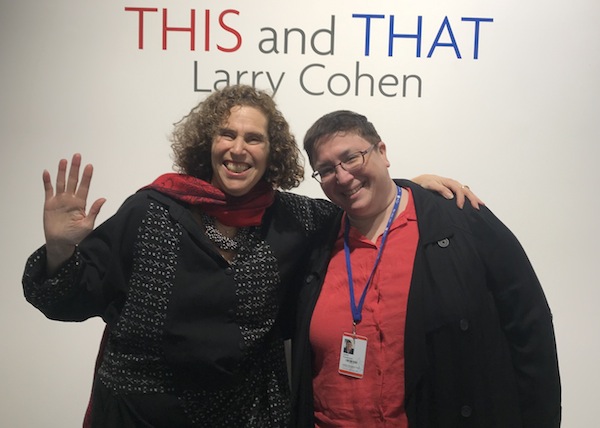 The Sidney and Gertrude Zack Gallery at the Jewish Community Centre of Greater Vancouver has a new director, Hope Forstenzer – one of the few directors in the gallery’s history to be a professional artist.

Forstenzer is a graphic designer and a glass artist; she is a member of the Terminal City Glass Co-op. She takes over the reins of the Zack Gallery from Linda Lando, who retired at the end of last year.

“I have a background in visual art and performing art,” Forstenzer told the Independent. “For years, I was the artistic director of a multimedia company in New York. We worked on short plays: judged them and then produced them around New York. It was an amazing job, very interesting, but it didn’t pay my bills. For that, I worked as a graphic designer.”

She also taught graphic design, first in the United States – New York, Seattle and Baltimore – and, later, in Vancouver, after her wife accepted a job at B.C. Children’s Hospital in 2012 and the family moved here. Forstenzer has been teaching graphic design at Emily Carr University of Art + Design and at Simon Fraser University.

The artist began working with glass in 2001, while still in New York. She liked it so much that she made it her principal medium. A number of glass shows in Seattle and Vancouver have included her pieces.

The life of a freelance artist is a hectic one. Forstenzer has had to juggle her teaching schedule and studio time, plus a family with young children. She longed for more professional stability.

“I started looking for a steady part-time job,” she said, “then I heard Linda Lando was retiring from the Zack. I always loved this gallery and its artists, loved the JCC. I decided to apply for the job. I’ve worked in leadership positions in the art field all my life, so this job seemed perfect, both in its essence and its timing.”

Her plans for the gallery are extensive. “I want to do at least as well as Linda did. She was a marvelous director, so I have big shoes to fill.”

Forstenzer is already working on future shows, both solo and group exhibitions, in various artistic formats. “I love diversity,” she said. “But a group show might be harder in some ways to jury and organize. Art is always subjective and, in a group show, some people will always like certain artists more than others. The trick is to make it work for the majority…. When a curator assembles a group show, it is a collaboration, like putting together a puzzle, making as little dissonance as possible from the disparate pieces. On the other hand, in a solo show, you create a flow of energy.”

With regard to the gallery and its place in the community, Forstenzer said, “I want to make sure the gallery is connected to the JCC. We are part of it, and that should be emphasized. It doesn’t mean only Jewish artists – the JCC has a diverse membership, it draws in people of all ages, skills and cultural influences. I want to reflect that in our future shows and programs. Linda started that with her amazing poetry series. I want to do more. Children’s programs. Sessions for older citizens. Workshops for families. I want interactions with the gallery. I want our visitors to be part of the shows.”

As for the artists, she said, “I want to create a nurturing environment for them in the gallery, want to encourage younger artists, not just in age but in experience. Some people only start in the arts after they retire, and their mastery in other areas makes them unique in artistic venues. I want to establish a relationship with our artists, so they will trust me.”

Forstenzer is sure that her being an artist herself is an asset for her work as gallery director. “I’m not only an artist, I’m a fan of the arts, of beautiful things of any kind. It’s not really that common. Many artists are not fans, they prefer their own art to anyone else’s, but I love art. When I visit a museum or a gallery, I want to absorb as much as I can of the other artists’ imaginations.”

Her years as an artist and as an art administrator give her a unique perspective – to see the gallery from both sides. “I can advocate for the artists,” she said, “but I also can and will represent the gallery and its patrons.”

While acting as the gallery director, Forstenzer said she will not exhibit her own work at the Zack. “It would be a conflict of interest,” she said. “I’ll never exhibit here. I will participate in the Terminal City Glass Co-op’s group shows as a glass artist, but, at the Zack, I’m the director, not an artist. I will keep a hard line between my glass-blowing and my gallery.”

To learn more about Forstenzer’s glassworks, visit her website, hopeforstenzer.com.