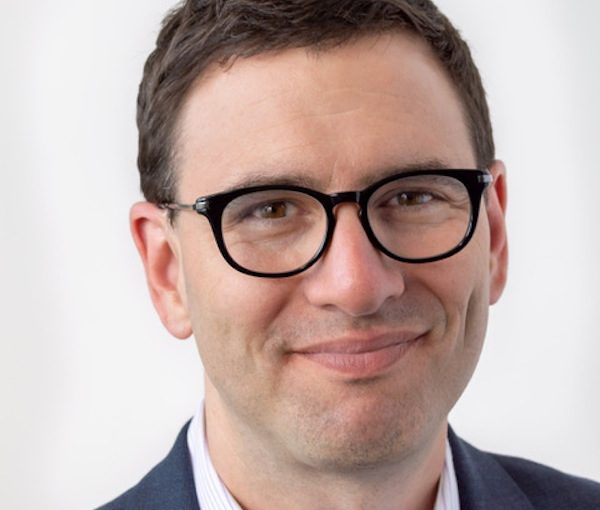 Avrum Nadigel’s latest book, which he co-authored with the late Dr. David Freeman, is aimed at people contemplating a career in family therapy. (photo from Avrum Nadigel)

Therapist Avrum Nadigel’s latest book hit the shelves this month. Co-authored with the late Dr. David Freeman, Where Would You Like to Start: A Master Therapist on Beginning Psychotherapy with Families is structured as a conversation or interview between veteran therapist Freeman and then-newish therapist Nadigel.

Nadigel is a family marriage therapist based in Toronto. Originally from Montreal, where he had worked for the Jewish community for years, he moved to Vancouver for a spell. It was here that he met Freeman (who passed away in 2010).

Freeman had brought in various therapists to speak on marriage, love and respect at different events. Attending these lectures, Nadigel found what the therapists had to say “redundant and I didn’t find it very helpful for me. I had a pretty severe case of fear of commitment, and they all rambled on about the same thing. But, when David spoke, it blew my mind.”

About a year after hearing Freeman speak, Nadigel met, online, the woman who would become his wife, Dr. Aliza Israel. “She is from Vancouver, but was staying in Toronto at the time,” said Nadigel. “Now, we’re married and have three kids. And that all started because of David’s talk in Vancouver. David’s talk introduced me to a type of therapy called family systems theory.’”

Nadigel read many books on the topic, including Freeman’s, which made Nadigel rethink his previously held suppositions about relationships and marriage. “I changed the way I practise with my own clients,” he said.

Nadigel moved to Toronto when he was accepted into a residency there. He started up a private practice and began to look for someone to mentor him. At his wife’s suggestion, he reached out to Freeman in Vancouver, who, although semi-retired, was happy to supervise Nadigel via Skype.

Nadigel recalled some of the game-changing ways in which Freeman changed his way of thinking.

“When I was single, if I felt anxious or not good in a relationship, I was taught that this meant there was something wrong,” said Nadigel by way of example. A relationship “should be lovely, giving and with good communication, but, as soon as I get anxious, I bolt. Then, David comes around and goes … ‘Perhaps your own internal states of anxiety have nothing to do with the people you’re dating, but with your own internal struggle itself.’ It really changed how I saw discomforting feelings in intimate relationships. It helped me sit with them longer.”

Thinking about his eventual marriage to Israel, Nadigel said, “I often think back to that time and think, ‘How did all this work?’ Maybe, it was one part luck, one part theory and one part having a good therapist in my corner.”

In addition to Freeman’s counsel, Nadigel has done much study on family systems, notably he did post-graduate training with the Western Pennsylvania Family Centre, which teaches Bowen family systems theory, as formulated by the late Dr. Murray Bowen, a psychiatrist and founder of the theory.

Recalling his conversations with Freeman, Nadigel said, “David was very worried about two things. Number one, that people were focusing too much on hacks and behavioural changes, and that the system was much more powerful than that … and that the system would often, not always, but often, thwart any attempts the individual would try to make the change. So, he was very concerned that there were so few therapists offering a larger perspective about human suffering.

“The second thing he was very worried about – I think this is because he was a grandfather at the time of his death, he had two grandkids – was about the disconnect from wise elders in society. I think that’s really coming home to roost right now, the fact that we have the hashtag on Twitter, where it says, ‘BoomerRemover.’

“Some people are thinking that, well, it’s good about this coronavirus – it’s going to kill off all the old people and there’ll be more condos. I don’t know what the hell they are thinking but we really do see the elderly as an inconvenience in a lot of cases, and David thought this creates an impoverished culture – that, when you think of traditional society, it’s the elders who share life lessons that can only be acquired over time, through adversity and history. You can read a book, but it’s very different if an elder tells you what it was like to survive the Blitz in Britain. And David thought that young people in their marriages were impoverished, because of their lack of connection.

“So, with those two things,” said Nadigel, “I thought, maybe, if I can somehow convince David to write another book, I could be the young green therapist and he could be the senior guy. He could speak to me and motivate the next generation of therapists.

“I thought to myself that it should be snappy and quick.… I threw him the idea and I think the same day he got back to me and said he thought the format’s viable – except that, in this case, it would be Skype calls between a young therapist and a senior therapist…. We quickly started working on this once a week.

“Then, David had the manuscript and was going on vacation,” said Nadigel. “We had a few more chapters to write; he really liked where the book was going. Then, I got an email from him, a very brief email, which was odd, because he was much more verbose. It just asked if I could call him.

“I thought, that doesn’t sound good, that maybe he was going to say the book sucks. I called, and it was his now-widow [Judith Anastasia], who answered, and she said, ‘Avrum, I’m sorry to tell you, but David died of a heart attack while we were cycling in Croatia.’ I couldn’t believe it. It was a crazy summer. My dad died, my son was born and David died.” 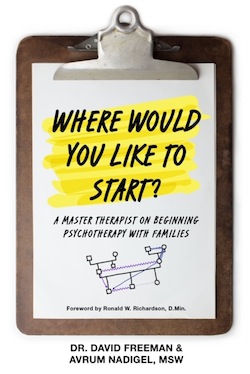 Several years later, with Anastasia’s blessing and to honour Freeman’s memory and work, Nadigel started to complete their book.

“The book gives you a taste of a master therapist, to experience the wisdom and thinking he brought to thousands of families and couples he’s worked with over 40 years,” explained Nadigel. “And, once you finish the book, you might feel it’s your responsibility now to go and further your training in this area.

“David’s life work was helping people understand that, if you want to do well with your own personal goals and struggles and gridlock, you have to understand what you’re up against,” said Nadigel. “And you don’t do that by just talking about your neurotransmitters and serotonin and dopamine, or meditation…. It’s about certain ways of the here and now, that you either distance or connect through relationships that are happening right now – that are happening with your mother, your father, your sister, your aunt, your cousin. The work is staring you right in the face right now.”

Family system coaching, consultation or therapy, said Nadigel, is based on “the theory and the road map of going back and reworking through some of the gridlock in your family. And those people who are successful at doing something and thinking differently [about] their problems with their relationships – siblings, spouse, kids, whatever – [are] bringing those successes to every relationship. And that does not happen in the clinician’s office.

And Nadigel himself is an example of how the approach can work.

“I’ve often thought that, if I was reading about this book, the interesting angle I always found … is that I was a punk rock alternative musician in Montreal. I was commitment-phobic and really saw marriage and family, marriage considerably, as the death knell of all that’s good in life – [that it’s] boring and sucks the nectar out of a good life. Then, David comes along in Vancouver and he just creates a profound paradigm shift in me, and I have come to a wildly different understanding. I’ve become a marriage therapist myself, a father, all this kind of stuff, so a pretty fundamental transition.

“I was one of these people that, once upon a time, really had a strong distaste for the very thing I’ve embraced,” said Nadigel. “It really is all credit to this one little talk in Vancouver in the JCC. There’s hope there. It doesn’t take years and years. It could be a 50-minute talk.”

Nadigel has created a blog and podcast to support the new book. To access it, visit nadigel.com/start. Electronic and hard copy versions of Where Would You Like to Start are available at amazon.ca.