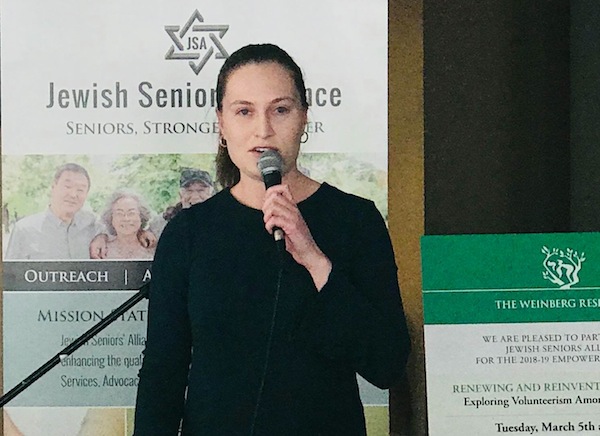 The following talk was delivered March 5 at the third session of the 2018/19 Jewish Seniors Alliance Empowerment Series, which took place at the Weinberg Residence. Speakers also included Larry Shapiro, JSA’s second vice-president; Jessica Bruce, volunteer coordinator for the Weinberg and the Louis Brier Home and Hospital; and Vanessa Trester, manager of the Weinberg.

It is relatively common knowledge that volunteering provides tremendous benefits to individuals and to the community at large. Volunteers have the opportunity to bring an increased sense of meaning and purpose to their lives, expand their social network, exercise unique skills and hobbies and, of course, help others in need. The presence of volunteers within a community increases social cohesion, builds trust and creates a “social infrastructure” of support, reciprocity and concern for others.

But what do volunteer roles really mean to those who participate in them? How does one start volunteering, and why do they continue? The Jewish community is exemplary in its provision of services and volunteer opportunities for children, youth, adults in mid- to late life, and the elderly. Yet the personal experiences of those who volunteer in the community, from a research standpoint, are largely unknown. This fact, along with my own experiences of working and volunteering within the community, inspired my master’s thesis, titled, An Exploration of Pathways, Motivations and Experiences Among Older Jewish Volunteers in Vancouver. The findings reflect interviews with 21 volunteers.

The majority of participants have volunteered for most of their lives. They described having parents who were community-minded, as well as adolescent experiences of being a part of Jewish youth organizations or women’s groups dedicated to community service. The expectation from others to volunteer was also discussed. Often, participants were asked to volunteer by their peers, rather than having sought out opportunities themselves. Over the years, this allowed them to experience multiple volunteer roles, as they would often be exposed to another role as a result of their status as a volunteer in the community.

Participants found volunteering to be personally rewarding, describing how their roles made them feel better about themselves, kept them busy and productive, as well as mentally fit. Participants were also motivated to volunteer for generative reasons; that is, to help the next generation and the community at large. The desire to pass on Jewish culture was evident, with many describing their efforts and desire to serve organizations that preserved historical documents, worked to support Jewish infrastructure and educate children in the community. They felt that volunteering represented an important part of Jewish life and cited the importance of helping others within Jewish culture and religion. Tzedakah, a Hebrew phrase meaning justice or righteousness, was frequently referenced.

Participants described the connections formed with their fellow volunteers and to the community. Friendships were maintained both within and outside of the context of the volunteer role. Caring for seniors was another common experience among participants. Many took on roles that involved working with older adults, whether it was making home visits to isolated older adults, or assisting with recreational programs. It was also found that participants gravitated towards leadership roles within volunteer organizations and, in some cases, had founded their own initiatives. Participants also found their volunteer roles to be an opportunity to engage in personal interests and hobbies, as well as a chance to use skills they learned during their professional careers.

Volunteering is a highly productive way for older adults to increase their level of activity, foster their interests, help others and continue to be social and connected to their communities. As Canada continues to diversify in terms of ethnic composition, it is essential that volunteer opportunities be made accessible to and inclusive of older adults from all backgrounds. To achieve this, it is imperative that future research in this area encompasses the experiences and stories of older adults themselves.

Eireann O’Dea is a PhD student in gerontology at Simon Fraser University. Her research interests are related to community engagement among older adults, ethno-gerontology and environmental accessibility. She wrote her master’s thesis on senior volunteers in the Jewish community and has recently joined the board of Jewish Seniors Alliance.