In her latest book, Be the Parent, Please (Templeton Press, 2018), author Naomi Schaefer Riley reminds parents to take back control and help their kids find healthier means of entertainment.

Originally from Massachusetts, this New York mom of three kids (ages 11, 9 and 5) is no stranger to society’s pressure to give children whatever they want, including the latest technology.

“Over the last few years, I myself struggled with the issues of how to handle screen time, and I’ve watched a lot of other parents struggle with it,” Schaefer Riley told the Independent. “As a journalist, I wanted to talk to experts and do reading, and find out what the research says … and talk to parents about strategies they were using to deal with this.

“The pressure to hand over screens to kids starts almost immediately these days,” she said, “The iPhone came out a little more than 10 years ago, coinciding with the birth of my oldest daughter. It took a couple years but, by the time she was in preschool, a lot of parents, even to have a basic conversation with another person, would hand over their phone just in order to distract the child.”

Today, tablets and cellphones have become a source of all things entertainment for kids (let alone adults), whether that involves looking at pictures of themselves, creating videos or playing games.

“When my kids were younger, we let them watch one show every night, some half-an-hour cartoon,” said Schaefer Riley. “Then, my son was born and the fight began over what they were watching and who gets to pick each night. And it became more of a struggle to tell them you’re going to turn off the TV…. A book I read enlightened me, called The Plug-In Drug. It came out a little more than 40 years ago and was mostly about TV and videogames.

“The author noted that, when you turn off a screen, it’s almost like waking a child up from a nap. It’s a trance-like state and they’re so into it that it’s almost like a change from sleep to wakefulness when you turn it off. And they become cranky. It can be as long as a half hour before they adjust back to reality. I think I was tired of the crankiness, too, of every time I turned it off, to have this fight ensue.”

At the Schaefer Riley house, there are a lot of toys and the kids are expected to entertain themselves without the TV. “But, a lot of parents don’t make that expectation,” she said. “They assume that, unless the child has a screen, the parent has to be entertaining them at all times, that the child can never be restless or irritated.”

She went on to explain that it’s not a parent’s job to ensure that their child is 100% engaged in something at all times. Instead of screens, she suggested, “Why not give your kids some pots and pans to bang together or some cardboard boxes? These are things we know are good for building fine and gross motor skills, and [that] encourage kids to explore things. 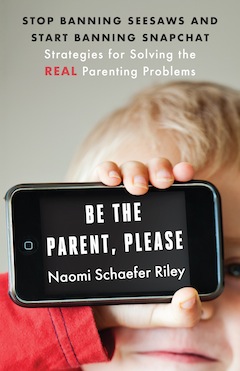 “I think what the screens have allowed is for us to exercise more control over our kids and keep them on a tighter leash. You don’t need to go all the way to the park. You can just sit in the living room and give your kid an iPad. That way, I don’t need to worry about whether you know enough about crossing the street or whether you’ve achieved that level of independence. The phone will allow me to have this tether on you. This is not very beneficial to kids in the long run.”

Children are now finding tasks difficult to handle if they cannot immediately text their parents for advice or counsel about their lives, argued Schaefer Riley. There is constant communication, with technology serving as a crutch for helicopter parenting.

“A lot of parents have confessed to me … they know, deep down … that they don’t need studies to tell them that their kids are on screens too much,” said Schaefer Riley. “Parents know this.”

It’s time to apply basic parenting strategies to technology, she said. “I know it sounds simplistic to say, but your kid doesn’t generally ask for chocolate cake for breakfast in the morning; they know there’s none for breakfast. If you talk about screen-time limits and stick to them, your kid will not be on you constantly…. If you stick with the rules you set for a few weeks or months, your child will learn that there is no point in asking again; they already know what the answer is and will stop asking for things you consistently say ‘no’ to. The idea is to bring parents back to reality and back to a sense of where they do have control.”

According to Schaefer Riley, the life skill of asking for assistance from an adult is one that many children are missing out on, due to the reliance on tablets and phones.

“I see the kids … my daughter is on the swim team … and they all walk out of practice and everyone is texting their parents – pick me up in five or 10 minutes outside,” said Schaefer Riley. “I’m like, ‘who are you?’ These are not your chauffeurs. I think that’s how we’ve come to think of ourselves.”

Schaefer Riley said observant families, who turn off their phones on Shabbat, have an advantage, as the children come to appreciate that there is something to be gained from family time. “I think,” she said, “that more and more people, whether they are religious or not, are trying to find that ‘technology Sabbath,’ as they like to call it, to give themselves a break … either at meal times, or one day a week, or on vacation. It’s considered a luxury now, to be able to get away from your phone.”

Schaefer Riley emphasized that her book is not meant to scold anyone. She herself faces these challenges.

“There’s a lot of pressure coming from technology companies and schools, and from the culture generally, that are really pushing you to hand over these devices to your kids,” she said. “It takes some willpower to say no, that’s not for my child, or this much time is not for my child.

“There’s a point at which you need to go into your community and find allies,” she added. “Everywhere I went, every community of people I’ve spoken with, there wasn’t just one family trying to hold the line. There were several and, sometimes, they weren’t connected with each other. But, if you do a little searching, you can find people trying to take a similar tactic, and it helps to have allies.”