All the mantras usually marshaled to justify Holocaust studies, such as “never again,” or “who does not learn from history is doomed to repeat it” or “evil will triumph when good people do nothing” are bogus, says Marrus. For “history does not speak to the present with … an admonitory voice”: historians are not moralists or mentors, and certainly not preceptors – their mandate is to “handle history with care” and to insist on “getting it right.”

But, if Holocaust studies have nothing to teach us, should we not ask to what end should Holocaust historians and educators “get it right”: and how does a Holocaust scholar’s commitment to “getting it right” differ from that of a botanist’s or a quantum physicist’s or, for that matter, an athlete’s or a bricklayer’s? It is the failure to answer this question that makes Marrus’ book so frustrating.

Marrus’ credentials in Holocaust studies are impeccable. His books on the Holocaust have received prestigious awards; he has served on some extremely important international committees designed to air out crucial Holocaust issues, and has met, and often argued publicly, with some of the world’s most prestigious Holocaust historians, including Raul Hilberg and Elie Wiesel, as well as Hannah Arendt, Emil Fackenheim and Daniel Jonah Goldhagen, all of whom he takes issue with in this book for suggesting that the Holocaust can offer lessons.

Marrus’ problem with regarding Holocaust history as a learning project is rooted in his historiography: what can one learn from history when history itself is so subjective? “If one looks hard enough at evidence,” says Marrus, “one can come up with the answer – or the lesson – that one wants.” And, again: history is “continually evolving,” its terrain endlessly “shifting,” exposing “new questions.” In other words, history is inevitably “a matter of interpretation.” (Marrus’ emphasis.) Thus, the lessons that one presumes to deduce from history will inevitably be the lessons that one preemptively wanted to find. As Marrus puts it, “lesson seeking often misshapes what we know about the event itself in order to fit particular causes or objectives.” 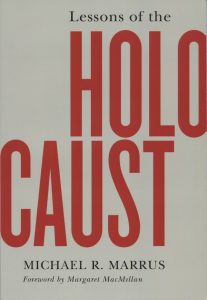 Fair enough, when it comes to comparing the Holocaust to “the rape of the environment [or] the harshness of bureaucracy,” but what about the larger, and more relevant, issues of social justice, of our moral duty to future generations, of our sacred duty to remember? Hitler saw carte blanche for his genocidal intentions by asking, “Who remembers the Armenians?” Surely it is crucial that no future Hitler be able to ask, “Who remembers the Jews?”

Marrus is on more solid, if more obvious, ground when he condemns the appropriating of Holocaust history by right-wing politicos in Israel, such as Menachem Begin and Binyamin Netanyahu, who he sees as using Holocaust references to manipulate opinion toward acceptance of their conservative policies. This political exploitation of Holocaust history has “crippled Israel’s capacities to respond imaginatively to questions of national identity and to seize new opportunities in a flawed global community.” Here, Marrus is probably right.

Marrus also condemns, again quite rightly, the enlisting of Holocaust precedents by special interest groups, such as advocates of gun control or those opposing bullying in schools, opponents of gay rights and animal abuse and so on – all anxious to further their causes by referencing the Holocaust and, in so doing, trivializing it.

Most pointedly, and again with some justification, Marrus attacks the thinking of those who would “universalize” the Holocaust, making Holocaust studies “a school for tolerance,” a warning against hate speech, against political apathy or against overly celebrating the actions of the pitifully few Nazi-fighting heroes, such as the leader of the Munich White Rose students,

Sophie Scholl, who was recently voted in Germany fourth among “the most important Germans of all time” – ahead of Bach, Goethe and Einstein. Again, this is an important point, and one that quite rightly occupies a lot of serious thinking in Holocaust studies.

Marrus’ final chapter, a brief 11 pages, is entitled “Lessons of the Holocaust,” and readers may be forgiven for thinking that Marrus is, finally, at the end of his book, going to take a stand.

Not at all. He says here, “we learn a great deal from the history of the Holocaust.” What, exactly? He doesn’t say. And, again, Holocaust studies are “intellectually enriching and facilitate our understanding of the world around us.” How so, and to what end? No answer. “We are wiser” for knowing Holocaust history. How so and, since there are no lessons in it, so what? In this final chapter, Marrus repeats over and over that Holocaust history “deepens appreciation of human reality” and “makes us more mature.” How so, since there’s nothing to be learned from it, on his own terms?

Holocaust educators will, I suspect, find Marrus’ position difficult to accept: they know exactly why they are teaching Holocaust studies – to impress upon (especially) young people the fragility of our human institutions and thereby to arm them against demagoguery. In other words, “never again.”

Demagoguery has been raising its head again in recent months in the United States. It would indeed be encouraging to all teachers of Holocaust studies if they could believe they’ve helped to effectively warn against it, a clear and inarguably important lesson to be learned from the dreadful past century.