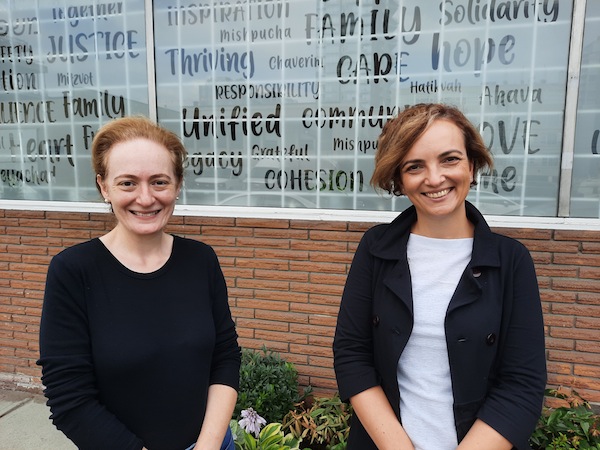 Tucked into a neighbourhood of low-rise industrial buildings, warehouses and mixed-use developments west of Main Street and south of Olympic Village is the new locus of Jewish Family Services Vancouver. The Kitchen, which opened mid-April, is the people-friendly hub for many of the programs JFS delivers to hundreds of clients every month.

“The Kitchen is an integration of a number of services that address poverty issues,” said

Tanja Demajo, chief executive officer of JFS Vancouver, which operates the Kitchen. While some components of the Kitchen’s programs are still on hold pending the end of the pandemic, it is already a busy and social environment. Clients can come weekly to pick up supplies from the Jewish Food Bank. While there, if they want, clients can meet with a caseworker to discuss access to government supports, meet with social workers or housing advocates or access other services. Behind the reception area are three private offices for caseworkers to meet with community members.

JFS still maintains a head office on Clark Drive, where some administrative work takes place, and where services best delivered in a less-social environment – such as counseling programs and services to Holocaust survivors – are offered. But the Kitchen really is the beating heart of JFS now.

“For example, with the seniors, they often have complex needs in terms of health, in terms of managing the relationship with the landlord, with different service providers, and the social worker is pretty much a point person and coordinates all that care for the client,” Demajo said. With many British Columbians, including too many seniors, unable to find a permanent family doctor, JFS can help connect them with help and accompany them to appointments if requested, she added.

“People who don’t have a [general practitioner] come and they need a prescription,” said Demajo. “Often, they aren’t comfortable going to just a general walk-in clinic, but often that’s the way to start. In many situations, our caseworkers would also go with the client to see the doctor, if they don’t feel like they can go on their own. We often try to see if we can find someone who will take them as a [patient] and it’s the same thing with the dentist. That’s how we work with people. When people are struggling to pay some of the bills because, of course, there’s a lot of unexpected emergencies, then we support them with that.”

Poverty is not only an economic challenge, she said, but a social one, too.

“It’s important just to acknowledge that people living in poverty are also dealing with a lot of isolation,” she said. So the busy and welcoming space the Kitchen provides is serving more than one need.

While the food bank has been operated by JFS in partnership with Jewish Women International for 15 years, this is the first time the program has had a permanent, purpose-built warehouse. In the back of the building, in a high-ceilinged space, are food-laden shelves, refrigerators and sorting spaces.

A parallel program is meals for those who are not able to prepare healthy dishes themselves, either temporarily due to illness or more permanently. JFS has had a meal delivery program for some time, but it was supplied through a third party. With a state-of-the-art commercial kitchen, JFS is now making their own plant-based kosher meals for delivery.

This component has allowed JFS to build relationships with farmers, which allows food bank clients the opportunity to select fresh produce.

“There are vegetables, berries, whatever is available on the farm,” said Demajo. “Customers can go to this online platform, choose what they want and pick it up from here on Thursday. The nice thing is that, again, people of different backgrounds can come here and connect with each other without knowing what their needs are.”

At the Kitchen, Tuesday is Breakfast Club.

“It’s a day for families,” Demajo said. “What they receive through the program is fresh vegetables and fruit, milk, cheese, yogurt, eggs, bread, peanut butter and cereals.” (There are dairy products in take-away food programs but the commercial kitchen is strictly pareve.)

Other food-related programs JFS delivers include Cooked with Chesed, through which clients can have five meals delivered every two weeks, featuring plates such as borscht, mushroom penne pasta, vegetarian Cobb salad, coconut chickpea curry and spaghetti and “meat” balls. Also available at the Kitchen are food vouchers that allow people to do their own shopping.

While pandemic restrictions have kept a damper on some of the social aspects, Demajo looks forward to a post-COVID world where the place will be hopping even more than it is now.

“This will hopefully become really a community hub,” she said. “Our hope was really to have a dedicated space for the community that JFS serves because one of the things that we recognized over the years is that JFS clients do not have space for gathering. They could come to different spaces, but they didn’t have their own dedicated space.”

This, she said, is why the Kitchen has a host of homey touches – artwork, photo displays, a play area for kids, a small library and, adjacent the kitchen itself, a café-like space where communal meals will occur when safe to do so.

The combined food programs serve more than 1,600 people. The food bank itself serves about 950 people.

“These numbers are constantly changing because some people stay with us for a long time, some people use the supports temporarily,” said Demajo.

Funding for the programs comes from the Jewish Federation of Greater Vancouver, private donors, and some federal and provincial government funding.

“When it comes to food, we’re also trying to build more partnerships and relationships where there is more in-kind food as well,” Demajo said.

Because they have a dedicated food storage space, including plenty of refrigerated shelves, the agency can now take in more perishable items than they could have accepted in the past. That means more fresh and healthy food for clients.

JFS has relationships with four farms – in Langley, Richmond, Pemberton and Chilliwack – that provide seasonal specialties.

“There are a lot of educational opportunities,” Demajo noted. “They have some animals there and provide not just food … so the plan is that down the road we also do some different programming with them as well.”