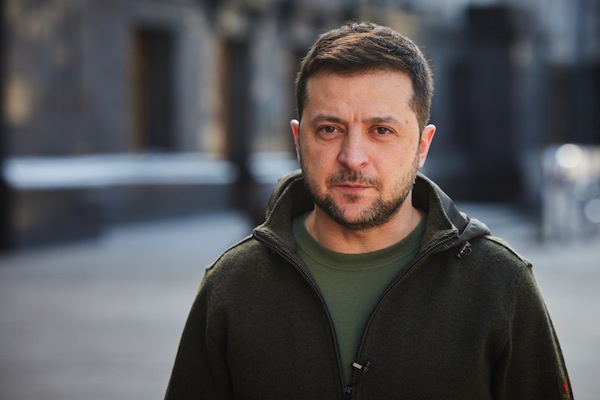 Hebrew University academic Samuel Barnai said Ukrainian unity extends beyond political parties and politicians, such as President Volodymyr Zelensky (pictured here), and the war is viewed as a great patriotic fight for Ukraine. (photo from president.gov.ua)

In the July 12, 2021, essay “On the Historical Unity of Russians and Ukrainians,” Russian President Vladimir Putin declares, “I am confident that true sovereignty of Ukraine is possible only in partnership with Russia. Our spiritual, human and civilizational ties formed for centuries and have their origins in the same sources. They have been hardened by common trials, achievements and victories. Our kinship has been transmitted from generation to generation. It is in the hearts and the memory of people living in modern Russia and Ukraine, in the blood ties that unite millions of our families. Together we have always been and will be many times stronger and more successful. For we are one people.”

This quote from Putin’s 2021 essay was shared by Prof. Yitzhak Brudny at a March 15 Hebrew University of Jerusalem webinar focused on “the ideological sources of the Russian-Ukrainian War.” The webinar featured Brudny, a professor of political science and history, and Samuel Barnai, an adjunct lecturer at the European Forum and at the HU’s Rothberg International School.

Brudny explained that Putin went even further in his claims just over a year after that essay. On Feb. 21, 2022, three days prior to the Russian invasion of Ukraine, Putin stated that “modern Ukraine was entirely created by Russia, more precisely, by the Bolshevik, communist Russia. This process began almost immediately after the 1917 revolution” and “Ukraine never had a tradition of genuine statehood.” Later in the speech, Putin points to Russia as being the main enemy in the eyes of the United States and NATO.

According to Brudny, these statements show a denial by Putin of Ukraine’s right to exist without an alliance with Russia and that the current Ukraine state is a “forepost of NATO” run by an “illegitimate, puppet government.” In Putin’s mind, he can justify the war because he sees it as rectifying an historical injustice caused more than a century ago, as well as remedying the security issues posed by a NATO-friendly state as Russia’s neighbour.

Brudny outlined the more recent history of Ukraine, from its 1991 independence from the Soviet Union (during its dissolution) to the present day. Ukraine stands in stark contrast to Russia in that it has accepted democratic electoral processes. Russia, meanwhile, has grown increasingly authoritarian and views a democratic state positioned between it and NATO countries, especially those that were part of the former Eastern Bloc, as a threat.

“Now that we are talking on the 20th day of the war, none of the targets have been reached,” said Barnai. “How can this be explained? In my opinion, one of the main reasons is the consolidation of Ukrainian society. There is widespread support for the president [Volodymyr Zelensky] and the government, which was not even the case two months ago. There is also support for accession to the EU and NATO, even in the Russian-speaking parts of Ukraine, which were less sympathetic to joining these alliances before,” he said.

In Barnai’s view, the present state of Ukrainian unity extends beyond current political parties and politicians, such as Zelensky, and the war is viewed as a great patriotic fight for Ukraine.

Barnai added that Putin, who has led Russia since Dec. 31, 1999, may have fallen victim to his own propaganda, “that Ukrainian-ness is an artificial tool to cause damage to the Russian people.”

The belief that Ukrainian culture is dangerous and must be eliminated runs deep in the Russian collective consciousness. Barnai gave several historical examples that illustrate this point. There was the suppression of the Ukrainian language by Czar Peter I in 1720. In 1763, Catherine the Great issued a decree banning the teaching of the Ukrainian language at the Kyiv-Mohyla Academy. In 1876, Alexander II prohibited the printing of all Ukrainian literature within the Russian Empire. And, in 1914, there was a decree by the last czar, Nicholas II, prohibiting the Ukrainian press. Despite a range of views on other historical matters, these and other Russian leaders shared a common desire to suppress Ukrainian cultural identity.

Barnai explained that there are close ties – historical, religious, and personal – between Russians and Ukrainians, and many have family connections to both countries. He said the real threat to Putin today is not NATO or the European Union, but “the success, even if it is limited success, of political and economic reform in Ukraine.”