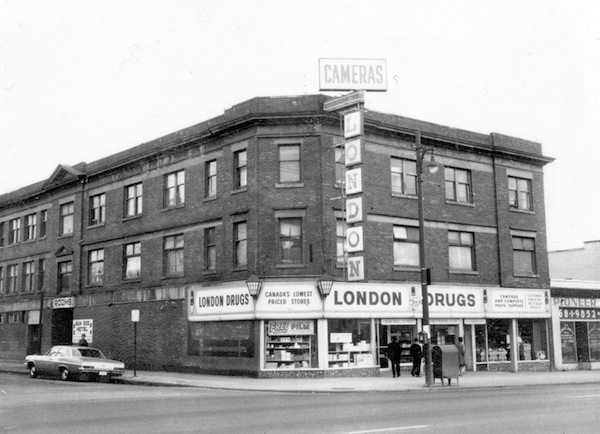 The first London Drugs was located at 800 Main St. The drugstore chain was started by Sam Bass in 1945. (photo from City of Vancouver)

In the 163 years that Jewish people have been living in British Columbia, they have experienced a great many things, and our community history is comprised of millions of stories. It is the ongoing work of the Jewish Museum and Archives of British Columbia to collect, preserve and share these stories.

This year, 2021, is a special one for the museum and archives – it’s the organization’s 50th anniversary. To mark the occasion, the JMABC will be releasing a special commemorative book. The volume is being designed as a keepsake to share with your children and grandchildren, or whichever young people you care about and whom you want to share your story with. It will provide a survey of our community’s rich history, fostering a connection between generations present and the past.

Dozens of community organizations are contributing their own organizational histories. Families and individuals are also invited to participate, either by contributing their family history or by nominating someone who has made a significant impact on the community, the region, or the world through their work, volunteer work, or philanthropy.

Full details about nominating or contributing are available at jewishmuseum.ca/fifty-years. Let the museum know who you think should be included.

Over the next several months, we’ll be publishing profiles of families and individuals to give you a taste of what you can expect in the anniversary publication. In this article, we share the story of Sam Bass, an innovative entrepreneur who left a lasting impact on the local Jewish community, the city of Vancouver and Canada as a whole.

Bass was someone who was never satisfied with the status quo. His restless creativity and business savvy made him an innovator of the modern drugstore. Born in 1915 on a Winnipeg farm to immigrant parents from Kiev, Ukraine, Bass received a diploma in pharmacy in 1939 from the faculty of pharmacy at the University of Manitoba. Following graduation, Bass enlisted, as a pharmacist, in the Royal Canadian Air Force for the Second World War. After the war, he decided to move to California; however, his planned brief stopover in Vancouver turned into permanent settlement.

Shortly after his arrival here in 1945, Bass purchased the old Schoff Drug Store at the corner of Main and Union streets. His first order of business was to change the name to London Drugs, named after London, England, the home of Canada’s then-king, King George VI.

Bass implemented the policy of a low-percentage markup on prescription drugs, he drastically increased the hours for dispensing prescription drugs (9 a.m. to midnight) and opened his store on Sundays. These actions flew in the face of existing conventions that drugstores only sold drugs during regular office hours at an industry-wide agreed-upon dispensing fee.

Bass’s new business model was extraordinarily successful, attracting customers from all over the city. He fought for years to defend his right to offer customers good-quality products and low prices. He went to the extent of advocating his position to the Supreme Court of Canada by appearing before a commission implemented by the federal government to investigate the cost of drugs. The commission eventually proposed five recommendations, three of which were found in Bass’s brief.

He shook up the pharmacy market in yet another important way, offering more than just pharmaceutical and medical items at a time when all stores offered exclusively specialized stock. Soon after the first London Drugs opened, Bass bought a full inventory of cameras and sold them at a discounted price. The gamble was a success and, to this day, cameras and home electronics remain cornerstone items at London Drugs. The practice has now become commonplace, with many large stores selling a wide diversity of products.

This tendency towards innovation gave London Drugs a competitive advantage and brought the company growing profitability. Over the next 20 years, Bass expanded the company to locations throughout the Lower Mainland. In 1968, after 23 years of ownership, he sold London Drugs to an American firm, the Daylin Corp., remaining on as London Drugs’ president until 1976, and overseeing further expansion. In 1976, the company was sold to the H.Y. Louis Group and, today, its stores number 78 across Western Canada.

Sam Bass’s life as a local entrepreneur stretched far beyond his personal success as a business owner. His legacy is represented by the widespread success of London Drugs across Western Canada. Its stores still reflect the business model that he revolutionized more than a half-century ago.