Some of the terror weapons found by Israel Security Agency (ISA) personnel. (photos by ISA via Ashernet) 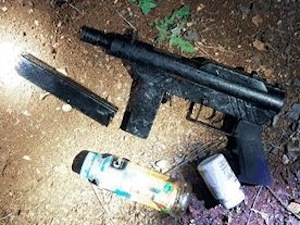 In recent months, the ISA, Israel Defence Forces and Israel Police have uncovered a large and active terrorist infrastructure that operated in the Nablus area on the West Bank from October 2017 until late April 2018, when more than 20 members of the group were detained by Israeli security forces. Most of the group’s members belonged to Hamas; some had extensive experience in terrorist operations, including the production of explosives. ISA investigations found that the group intended to carry out several attacks in various Israeli cities. Among the items seized were improvised explosive devices, including one weighing 10 kilograms; materials for the production of explosives; weapons; and instructions for the manufacture of bombs and explosive materials.