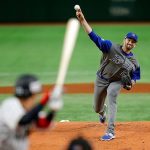 Josh Zeid during the game against Japan. (photo from worldbaseballclassic.com)

Team Israel had a great run at the World Baseball Classic tournament. The ballplayers with a David vs. Goliath approach came out swinging hard and stunned the world with four consecutive wins in the preliminary and second rounds. But two losses in a row – an 8-3 loss to Japan March 15 and a 12-2 clobbering by the Netherlands on March 13 – made advancing to the finals a dream for the next global tournament.

The March 15 game started with five scoreless innings, but Japan blew open a lead in the sixth with five runs and added three more for good measure in the eighth. Israel scored all its runs in the top of the ninth.

The World Baseball Classic is a tournament in which the best baseball players in the world compete. Team Israel had bookers betting against it even making the main event, but the blue-and-white uniformed ballplayers, who were ranked 41st going into the Classic, not only made it to the preliminary rounds but won an astounding four in a row at the tournament.

Dubbed the Cinderella team of the contest, Team Israel stunned Cuba 4-1 in the first WBC quarterfinal game at the Tokyo Dome and, before that, swept the first round of games by beating South Korea, Taiwan and the Netherlands.

Only three of Team Israel’s 28 players are Israeli; the rest are Jewish Americans. According to WBC rules, anyone eligible to hold citizenship in a country can play for its national team. There are other teams with players who do not hold passports for the country for which they’re playing.

“The players love playing for Israel,” Israel Association of Baseball president Peter Kurz told Israel21c. “A lot of them want to come and visit after the tournament or after they retire.”

For fans, that the ballplayers are proud to wear “Israel” on their uniforms and represent the country is more than enough.

“I am a lifelong baseball fan, and it’s thrilling to see Israel competing on a world stage. But Israel’s participation in the World Baseball Classic is about so much more than baseball,” said Elie Klein, an associate partner at Finn Partners Israel who calls himself a “rabid New York Mets fan.”

“While baseball fans around the globe have taken notice of Team Israel due to their surprising athletic prowess, Jews around the world – many of whom have never watched a single inning of baseball – are drawn to Team Israel out of deep Jewish pride. Not because they are Israelis, but because they aren’t – they are largely American Jews who have decided to wear uniforms emblazoned with the Jewish star and don kippot during Hatikvah, to identify as Jews in such a public way,” said Klein.

American rapper Kosha Dillz (Rami Matan Even-Esh) even made up a song about Team Israel. And Team Israel will also be remembered for its mascot, Mensch on a Bench, a stuffed doll that was the Jewish answer to the popular Christmas toy and story Elf on the Shelf.