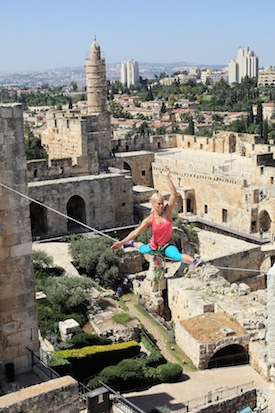 On May 2, slackliner Heather Larson, from Denver, Colo., traveled the 35-metre distance between city walls at the Tower of David. Wearing a harness attached to the line, in case she fell, Larson demonstrated various yoga poses along her way. In Israel to draw attention to the upcoming Israel Festival, which takes place in Jerusalem every June, Larson was also being filmed as part of a promotional campaign for a new Israeli-designed backpack.