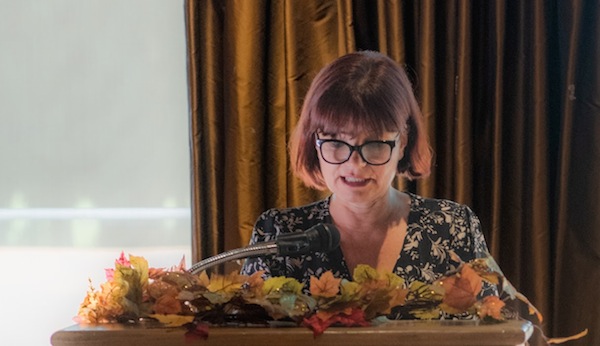 Toby Rubin was invested as the new president of CHW Vancouver on Oct. 16. (photo by Sid Akselrod)

A vast amount of progress has been made in gender equality in recent decades, but organizations where women come together for philanthropic work and social connections remain desirable and necessary, says Toby Rubin, the new president of CHW Vancouver.

Founded by Jewish women in 1917, after a visit from Hadassah founder Henrietta Szold, CHW started out as Hadassah Organization of Canada. In 1921, Canadian Hadassah affiliated with World WIZO and became known Hadassah-WIZO Organization of Canada (later condensed to Canadian Hadassah-WIZO). CHW defines itself as a non-political, non-partisan, national network of dedicated volunteers who believe that excellence and advancement of education, healthcare and social services transcend politics, religion and national boundaries.

Rubin has been a volunteer with the local chapter of the organization for years and was invested as the president at an event Oct. 16 at the Richmond Country Club. In an interview with the Independent, she attempted to dispel some misconceptions.

First and foremost, she said, is the concept that CHW “is a bubbe organization.”

“We have really changed,” she said. A new chapter of 25-to-40-year-old women – including Rubin’s daughter and a cadre of new leaders who were centre-stage at the installation luncheon – has launched and already held their first fundraising event. They raised $5,000 for JOLT, a leadership development curriculum being developed by Young Judaea Canada.

Another misconception, Rubin said, is that all funds from CHW’s philanthropy go to Israel. Rubin and a group of Canadian activists have just returned from a tour of Hadassah projects in Israel, but she stressed that local and Canadian projects are also supported by the chapter’s work. Among the initiatives the group supports is SOS, Starting Over Safely, for victims of domestic violence; scholarships for an LGBTQ+ kids’ camp; and Franny’s Fund.

The latter program was launched by Rebecca Snukal, a Calgary defence lawyer with two decades of experience navigating the legal system and social safety net through some emotionally and administratively perilous cases. But when she and her own family were rocked by crisis, she came to understand how unwieldy the system is – even people with expertise in the field have challenges accessing the legal and psychological supports they require. Snukal was the guest speaker at the October event.

Something that Rubin especially wants to dispel is the idea that CHW’s work is accessible only to Jews. The foremost example, she said, comes from Hadassah Medical Centre in Israel, where triage is based on medical need, to the extent that injured terrorists have been treated based on the severity of their condition alongside victims of their attack.

Also at the meeting, Daniella Givon, a past president, was honoured for her many years of commitment to the organization and the broader community. The meeting also expressed gratitude to outgoing presidents Stephanie Rusen and Sasha Gerson.

In addition to her role with CHW, Rubin is co-executive director of Kehila Society of Richmond, which connects Jewish people in Richmond with one another and with businesses, health and social service agencies and community resources. She is also a board member of Jewish Seniors Alliance and Better at Home committee of the City of Richmond.

Rubin comes to CHW naturally – her mother, Linda Hilford, is a member and both her grandmothers, Vera Himelfarb and Rae Moss, were involved on the Prairies back in the day.

The enthusiasm Rubin and other members of the local chapter exhibit is a reflection, she said, of exciting changes at the national level where, under the fresh leadership of national chief executive officer Lisa Colt-Kotler, the organization has seen dramatic progress in the past couple of years.

“She’s just really pumped energy into it and she’s updated it, and is working at making us more mainstream,” Rubin said of Colt-Kotler. Technology has been a boon, she added, allowing members from across the country to conveniently meet regularly without getting on a plane.

Times have changed from when a large proportion of Canadian women did not work outside the home. But those social and economic changes have not altered one fundamental need, said Rubin.

“We are really about bringing women together, to empower them in their philanthropic needs and introduce them and network them with other women,” she said. “We just want them to meet each other, be there, support each other, share their resources. Ultimately, what brought me to this organization 30 years ago – aside from the fact that I have grandparents and a mom who were involved and I love Israel – was women. The ceiling has broken in those 30 years but it’s still there and we need to be there for each other.”

For decades, CHW was most closely associated in the public mind with Hadassah Bazaar, a massive undertaking that ended about 15 years ago. The explosive growth of thrift stores, combined with the immense resources required to execute the annual event, led to the decision to end the tradition. But Rubin said a new initiative is soon to launch nationally that nods to that history – possibly an online version of the bazaar or something similar. Plans are in development.

Things have come a long way, but Rubin said expectations have grown in some ways and getting together with women experiencing similar things is no less valuable than it was in her mother’s or her grandmothers’ time.

“I think women still have a long way to go and we need to support each other and be there for each other, lift each other up,” she said. “I’m trying to be a mom and I’m trying to do a job and I can’t be Superwoman and [it’s good] to know that’s OK – nobody is. I think that’s truly, truly important.”