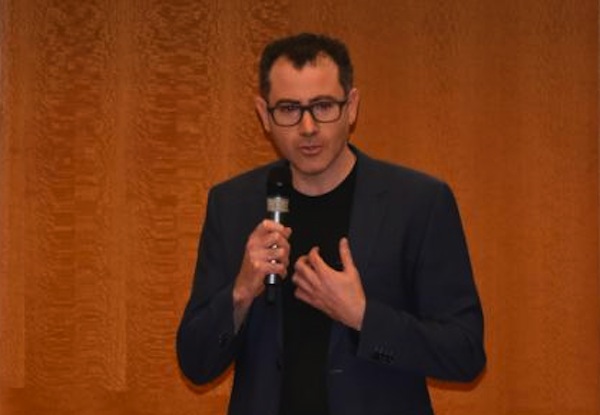 Elan Divon has found his passion and purpose in life – helping people to find their passion and to confidently fulfil a purpose that not only builds their own positive energy but also lets that energy spill out to improve the world in both small and potentially large ways.

On April 8, King David High School’s PAC hosted an evening that featured Divon, founder and chief executive officer of the Divon Academy, which, according to its website, “help[s] students and professionals stand out, and develop skills that are proven to boost their long-term success and well-being.”

He began by sharing the story of avoiding a deadly suicide bombing by sheer coincidence. Twenty years old, a soldier in the Israeli army, he had just returned home and was on a date at a café. The woman wanted ice cream instead, so they left; moments later, they heard three bombs go off, many people were killed, hundreds were injured, in the area they had just been. The experience jolted Divon onto a path of self-reflection and a search for spiritual meaning.

He went to study abroad, later quitting a Wall Street job and then studying archeology and anthropology at Brandeis University, followed by comparative religion at Harvard University.

“Since then,” reads his bio, he “has directed a peace camp for embattled Israeli and Palestinian teens; delivered countless personal development workshops to young professionals around the world, frequently presents before CEOs and business leaders; and, most recently, co-founded the Einstein Legacy Project to inspire the next generation of brilliant minds on the planet.”

Divon explained to the audience at KDHS that he feels he has found his purpose and can, therefore, live his purpose and make every moment count. He wants others to be able to do the same. He spoke about what he called a “stress epidemic” and identified five key aspects that inhibit personal growth and cause poor performance for students and adults alike.

The first factor is how much technology has invaded our ways of behaving and thinking. “Because of technology, people feel that everything needs to happen instantly,” he explained. With smartphones and constant access to the internet and apps, people find the answers they are looking for without really having to search, and they communicate with others without really having to interact.

“Our outer reality works very quickly but our inner reality takes time to develop,” he said about why this causes stress. Using the example of gestation, Divon explained how certain biological functions cannot be rushed – by technology or just because we shower them with attention. It takes time and experiences – both positive and negative – to build the necessary skills for human interaction and resilience, to be a well-rounded and confident person, he said.

The culture of comparison that dominates the internet is the second challenge. Before the advent of the internet, said Divon, a person might compare themselves to their sibling, a neighbour or the most impressive student at school. Today, we see carefully crafted virtual personae online from all over the world, and use those as a totally unrealistic benchmark for self-comparison, he said.

Next, Divon focused on the benefits that can be gained from discomfort. “Parents need to give their children space to solve their problems themselves,” he said, noting that, currently, teens can avoid uncomfortable situations by hiding behind their over-involved parents or their phones.

Social isolation – Divon’s fourth area of concern – can result from living a virtual life. Without direct personal contact, he said, people suffer all kinds of stress. Age-old ways of coping with painful situations or celebrating happy moments are eliminated by text communication. “Studies show that when good news is shared via text, it’s like it didn’t happen, even when the recipient of the text responds. Only through personal contact do people feel supported and connected,” explained Divon.

Finally, he said that overstimulation is damaging everyone. “We are drowning in information but starving for wisdom,” he said.

First, we need to have a proactive rather than a reactive mindset, he said. Using the establishment of the state of Israel as an example, Divon explained how the nascent state was able to turn a rocky beginning into a success. Rather than focus on the paucity of resources and abundance of hostile neighbours, those who established the modern state of Israel were optimistic and counted their blessings. “Being a victor over circumstances rather than a victim of circumstances is what sets people with a positive mindset apart from those with a negative one,” said Divon.

A positive mindset helps build the second key factor: relationships. A strong – real, not virtual – support group is a protection from stress, it helps most people find their jobs and determines and gives meaning to life, said Divon.

The third component to finding contentment and productivity is stress management. “Stress is resisting what is in a present moment,” Divon said. If stress is resistance and 95% of stress occurs in the mind, it is possible to eliminate or manage most of the stress we perceive in our lives, he explained. While the steps needed to manage stress are not easy, Divon said that, with practise, step-by-step, people of all ages can change their habits and develop more effective ways of coping.

Neuroplasticity is the ability of the brain to adapt and change. Divon explained that, although there are many stressors and that technology is often our foe instead of our friend, we can all develop new pathways in our brain. We can enhance the quality of energy we possess and make ourselves and those around us happier.

Michelle Dodek is a freelance writer living in Vancouver, and the mother of a 12- and a 13-year-old.