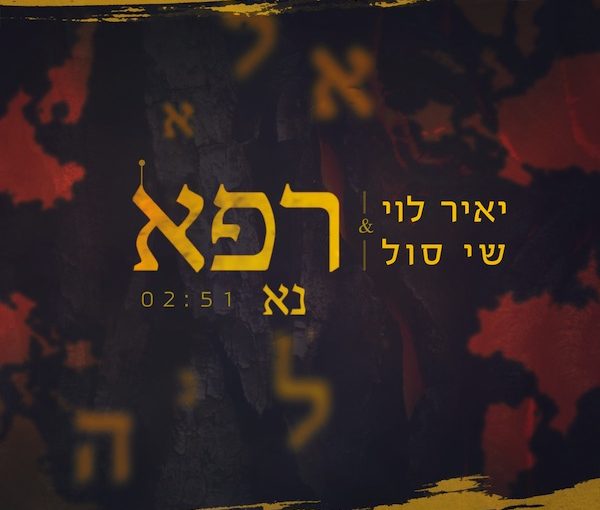 Israeli artists Yair Levi and Shai Sol sing Moses’s prayer to heal his sister Miriam of leprosy. The song, “Refa Na,” has resonated with people during the pandemic.

The song “Refa Na” (“Heal Her Now’”) by Israeli composer Yair Levi, together with vocalist Shai Sol, has become a global hit during the current COVID-19 pandemic.

Based on Moses’s prayer to heal his sister Miriam after she contracted leprosy, the song was released on Levi’s Facebook page April 6. The lyrics include the words, “O Lord, heal her now. O Lord, I beseech thee. Then we will be strengthened and healed” (Numbers 12:13) and Levi’s original is in multiple languages: Hebrew, as well as English, Spanish, French, German, Chinese, Arabic, Russian, Hindi and Swahili. The song has been picked up in dozens of covers, from Lebanon to Argentina.

When Levi’s grandmother fell ill, he composed a tune incorporating Moses’s prayer for his sister’s wellbeing. The song has resonated throughout the world during the current pandemic, garnering hundreds of thousands of views and shares.

“My grandmother had an illness unrelated to coronavirus, but the pandemic obviously affected everyone, myself included,” Levi, 31, told Ynet news portal. “Due to the epidemic, I received the names of people in need of prayer and a list of about 20 names accumulated on my fridge. Every day, I would say a prayer for the sick, and I searched for words and a tune related to medicine.”

“I took my guitar and composed the music for it on the spot and, since I have a recording studio in my home, I recorded the song within a week.”

Levi then approached Sol, a vocalist with Miqedem, a band that composes and sings Psalms all around the world.

“In quarantine and with no way to actually meet, she recorded herself,” Levi said.

After posting the song on social media, he said, “It was amazing. We received many responses and translations. Immediately after we released the song, it was shared online by evangelist Christians, Jewish communities, and even the Friends of the IDF organization.”

But not only the obvious audiences were enthusiastic.

“We have received cover versions from all over the world, including from a Lebanese singer, and, on Saturday evening, I received three new covers from Namibia … India and a Brazilian singer, Fortunee Joyce Safdie, who performed the song live on her Instagram page,” he said.

“Getting so many messages from people all around the world is incredible,” he added. “If I have the privilege to spread prayer around the world, to me, it’s just crazy. When people from all over the world translate and sing a prayer for health, it feels like it is literally the End of Times.”

During his three-year service in the Israel Defence Forces, Levi – who grew up in Israel’s secular mainstream – became intrigued by traditional Judaism. A turning point in his life came on May 31, 2010. Serving as a naval commando, his elite unit stormed the MV Mavi Marmara, one of six ships in the Gaza Freedom Flotilla attempting to breach Israel’s blockade of the coastal enclave. Nine Turkish activists were killed in the incident, while 10 IDF soldiers from Levi’s unit were wounded. After the sea battle, Levi was determined to join an IDF officer course. But, at the age of 26, he decided to pursue a musical rather than military career.

“I spoke with my commander, who told me people often regret what they had not done,” Levi said. “It opened my eyes and I realized that the flotilla incident pushed me in the direction of the course, but my real dream was to make music and become a singer.”

“People see me as a religious person but I don’t like labels,” he said of his oeuvre.