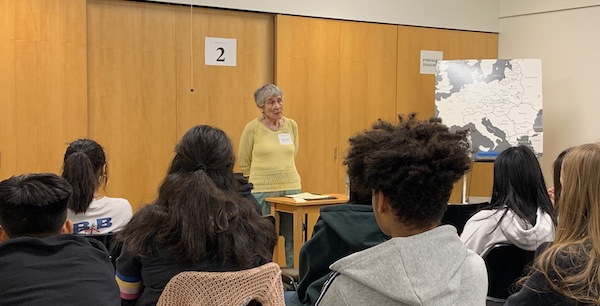 For many years, people dedicated to educating about the Holocaust and its moral lessons have been adapting to new realities. The declining number of survivors and the need to preserve their eyewitness testimony has necessitated innovative means of conveying these lessons to successive generations. As a result of these preparations, organizations like the Vancouver Holocaust Education Centre (VHEC) have been remarkably prepared to continue their work despite the limitations imposed by a global pandemic.

Dr. Claude Romney has been sharing her wartime experiences with younger audiences for several years. Her father, Dr. Jacques Lewin, was arrested in Paris at the end of 1941 and was among the first prisoners transported to Auschwitz. While Romney and her mother survived the war in southern France, evading numerous close calls, her father survived the most notorious Nazi camp because his skills were useful to the Nazis – he was a doctor who was put into service at the camp. Romney has researched and spoken about the experiences of her father and other “prisoner-doctors.”

Since the pandemic began, Romney has done two virtual presentations to schools and, while she wishes the talks could be in person, she is grateful that the technology exists to allow them to happen at all.

“I personally, and I think the other survivors who continue to talk to students online, have to be grateful both to the [Vancouver] Holocaust Education Centre and, of course, most of all, to the teachers who still get in touch and haven’t given up,” she said. “It’s something which could easily have fallen by the wayside. I think it’s very fortunate that teachers are dedicated enough to continue.”

A year and counting into the pandemic, Romney said the global upheaval could have led to lost opportunities.

“We feel there is some urgency because we’re not getting any younger,” she said. “It’s very important.”

The online events differ, depending on the audience. Some classes that are still meeting in person are set up so that the speaker sees the teacher but not the entire class. When classes are virtual, the speaker is one of many faces on a Zoom call.

“This would never have been possible for students 15 years ago, 10 years ago maybe even,” Romney said. “It makes a big difference because, of course, there are books and articles, but it’s not the same as hearing somebody tell their personal stories.”

While the survivor speakers are talking about their past, the lessons they aim to impart are for the present and future.

“I think it’s vital that the new generations know about what happened because it’s up to them to prevent this kind of thing from happening again,” she said. “And to understand that it’s vital to be tolerant of other people who may be different in some ways because they come from different cultures, different religions. It’s a cautionary tale really.”

Ashley Ross has been teaching a course in genocide studies at Aldergrove Community Secondary School for four years. She can attest that students make connections between the present and the past – and that relevance has been honed more sharply in the past couple of years.

“When I first started teaching it, it was very hard for them to understand the German context of that era,” she said, noting that she was challenged to demonstrate the “slippery slope” of hatred, fear and scapegoating. Sadly, students understand that phenomenon better than just a few years ago. “Right now, they are immediately seeing connections and understanding and seeing it play out in their current world.… More than ever, the lessons of the power of propaganda and the fear and the scapegoating are really resonating in our world. It’s through those historical lessons that we are better equipped to process what we’re currently facing.”

She maintains that the survivor speakers’ virtual events are every bit as powerful on the students as an in-person one. She even sees a benefit in the fact that, when they know they can’t be seen by the speaker, students may be more open with their emotional responses.

“Because the Holocaust survivor is only looking at my face rather than their faces, I find that it’s often more raw for the students. In a large auditorium, it doesn’t have that same personal impact,” said Ross, who has led a student trip to Europe that included a visit to Auschwitz.

Sharing firsthand accounts with young generations puts a human face to a part of history that is enormous in scope and perhaps remote in time from the perspective of a teenager.

“I think there’s a sense of honour to have a direct connection to this history that sometimes feels so far away,” she said. “It’s a reminder that it isn’t so far away. I think it’s really impactful to hear first-person accounts [about] something that can get so bogged down in huge numbers.”

Dr. Ilona Shulman Spaar, education director and curator at the VHEC, acknowledges that her team did not know what to expect when the pandemic began a year ago. At the same time, the remote delivery of programs and resources that was necessary due to COVID was something for which the centre was already prepared. Not only were Holocaust survivors and other educators delivering virtual talks to student groups in remote parts of British Columbia, a vast digitization process over the past several years has made much of the centre’s collections accessible online, including artifacts, documents, written testimonies and videos.

The VHEC also saw an increase in donations of artifacts and documents. This may be because people are spending more time at home and deciding to clean out attics and closets. Shulman Spaar also thinks people may have a little more time to read the communications they send to supporters, which often include appeals for family records and other items.

Echoing the Aldergrove teacher, Shulman Spaar thinks another factor for increased interest in the VHEC’s programs and resources may be due to current events. Political situations in the United States and around the world, the increased awareness of violence against minority communities and other topics in the news daily underscore the relevance of the organization’s work.

“Ultimately, we are an anti-racism-based Holocaust education centre,” she said. “If you look at what’s going on, it does seem very relevant at the moment.”

There were challenges in rapidly scaling the delivery of virtual programs to more groups. Docents, educators and survivor speakers had to learn the new technologies and adapt their messages to the medium.

Conversely, there have been silver linings. Some survivors who, for health or mobility reasons, could not present their testimonies in person have been able to do so virtually. As capacity has grown for delivering programs remotely, so have requests. The VHEC has welcomed invitations from other provinces, as well as schools in northern British Columbia and other remote parts of the province where survivors are unlikely to visit.

Moreover, said Shulman Spaar, some participants have commented that seeing survivors in their own homes, rather than on a stage, is unexpectedly powerful.

“It’s not the same as an in-person encounter,” she acknowledged, “but, also, hearing the speaker speaking from her or his living room, it’s a different intimate situation that happens. Yes, there is this screen still, but some students and teachers comment how they feel very close and it feels like an intimate encounter rather than being in a big hall and on a stage.