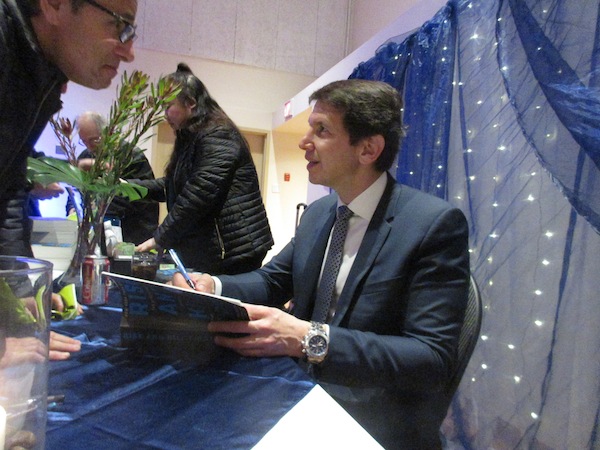 Ronen Bergman signs a copy of his book Rise and Kill First: The Secret History of Israel’s Targeted Assassinations for an attendee of his talk at Congregation Beth Tikvah Feb. 2. (photo by Pat Johnson)

Bergman, a staff writer at The New York Times Magazine and senior political and military analyst for the Israeli daily Yedioth Ahronoth, shared the history of the Mossad as told in his bestselling book Rise and Kill First: The Secret History of Israel’s Targeted Assassinations. One had an extremely timely conclusion.

Imad Mughniyeh was the military commander of Hezbollah, who Bergman called “the most wanted and most capable and most diabolical terrorist who ever walked the face of the earth.” Mughniyeh is believed responsible for the 1983 bombing of the U.S. embassy in Beirut and truck bombings in the same city, which killed hundreds of U.S. and French military personnel, and also was involved in the 1992 bombing of the Israeli embassy in Buenos Aires and the 1994 bombing of the AMIA Jewish community centre there, as well as countless other atrocities worldwide.

“He was wanted by 41 different countries and the only thing they had from him is a vague photograph from 1983,” said Bergman. Finally, the Mossad located Mughniyeh in a safe house in Damascus, but, since Israel does not have diplomatic relations with Syria and, therefore, does not have an embassy there, they were at a disadvantage. Embassies are a great boon to spies, he said.

The CIA required permission from then-U.S. President George W. Bush, so Ehud Olmert, who was then Israel’s prime minister, flew to Washington for a secret meeting with Bush and urged the president to help Mossad take out the terrorist, noting the number of Americans Mughniyeh had killed.

“George Bush was convinced, but he said on one condition – no collateral damage,” Bergman said. No bystanders or associates were to be harmed.

Working with the CIA, the Mossad set up the scenario and then aborted the operation 53 times because the target was not within the defined kill zone or because he was not alone or because, on one occasion, his identity could not be 100% verified because he was wearing a scarf due to inclement weather.

On Feb. 12, 2008, Mughniyeh left the safe house and the Mossad was about to push the button when they realized he was not alone.

“He’s walking with a man,” Bergman recounted. “Someone looks at the monitor and says, oh that’s not just a man, that’s Good Dog. Good Dog was the codename for Qasem Soleimani,” the top Iranian general and commander of the Quds Force, responsible for clandestine operations and global terror.

“So, someone said, how wonderful, let’s take them both,” said Bergman. “They called Meir Dagan [director of Mossad], who was sitting shivah for his mother. He calls Olmert and Olmert says no, abort, I promised President Bush that only Mughniyeh is killed.”

Later that same day, Mughniyeh was found alone outside the safe house and killed by an exploding car as he passed on foot. But Soleimani would live another dozen years – until he was killed Jan. 3 of this year, on orders of U.S. President Donald Trump, sparking a conflict that nearly led to all-out war between the United States and Iran.

Bergman, a lawyer and author of six bestselling books, recently received the Sokolov Prize, Israel’s equivalent of the Pulitzer. In undertaking Rise and Kill First, Bergman discarded all previous work on the subject and interviewed 1,000 intelligence officials and others with inside information on the Mossad and its operations. The book is now being turned into an HBO series.

Bergman recounted how, in 2018, Israel stunned the world when Prime Minister Binyamin Netanyahu invited the media to view a massive cache of documents and other materials related to the Iranian nuclear project. The moment was the culmination of two years of planning, involving 500 operatives, including 18 who located and infiltrated a secret archive outside Tehran, then swooped in, with a five-and-a-half-hour window in the middle of the night, to execute the deed and escape, relocating the ayatollah’s nuclear secrets to Israel.

Even with the Mossad’s expertise at safe-cracking, the team knew that they would not have time, once inside the archive, to fiddle with locks.

“So, Mossad establishes a front company in Europe who orders two empty safes from the same Iranian manufacturer. They ship the safes to Paris, then ship them to the Mossad lab in Tel Aviv, where they start drilling into them, trying to find what’s the fastest way to open them.”

They determined that it would require at least 3,600 degrees Fahrenheit to break into the archives’ security.

“Now imagine what sort of energy you need to shlep with you to Tehran in order to create such energy and do that in four different places because you need to open all the vaults,” said Bergman. They also had to bypass other security systems and interfere with video surveillance to make the cameras continue broadcasting as if nothing untoward was happening.

In the morning, when the heist was discovered by archives security officials, Bergman said, “no less than 12,000 troops, Revolutionary Guards, policeman, army” and others descended on the place, but could not discern how anyone could get in, grab all the contents and get out undetected. It would be two months until Netanyahu went public and the Iranians could finally confirm that the perpetrators were Mossad.

“Someone could ask, why should we write a book about the history of the Mossad? This is secret, right?” Bergman said. He acknowledges he left out a great number of secrets, some of which he will take to the grave, but added that it is impossible to tell the story of Israel without telling the story of the Mossad because any major decisions, any turning points in the dramatic story of the country, have the imprint of the intelligence services on it.

He warned, though, that this is not all derring-do and triumph. “If you want to read a book just glorifying Israeli intelligence, I suggest you don’t read Rise and Kill First,” he said. “Sometimes, the Jewish James Bond looks more like Inspector Clouseau.”

Many people ask Bergman how he got the top intelligence officials in the country – former heads of agency, high-level operatives, spies and agents – to talk, usually quite freely and almost always on the record.

“It was easy,” he said. “I smiled. When you smile to people, they feel comfortable to talk. But that’s not the whole answer. These people wanted to talk because they wanted people to know … what they have done in order to keep Israel safe.”

Some interviewees said they told Bergman things they had never told their spouses. But, when subjects were not forthcoming, he had a trick.

“If someone was not that enthusiastic to speak, I did to him or her the one thing that makes Israelis more ballistic and furious than anything else,” Bergman said. “I told him someone else took credit for his operations.”

He mooted a typical response: “What? He said that he was behind enemy lines, that he planned the operation, that he risked his life? Now I’m going to tell you the truth,” Bergman deadpanned. “Always works.”

In a remarkable number of the interviews, a single phrase frequently stood out: a quote from the Babylonian Talmud: “Whoever comes to kill you, rise up and kill him first.”

“Because the way they saw it, they had no other choice,” said Bergman, noting that outsiders cannot understand the DNA, the genome, the motives of Israelis, without understanding the imprint of the Holocaust and the determination to never be powerless again.

Hamas has bragged that they have more volunteers for suicide bombings than they have suicide belts.

“It turns out the only thing that stops these people from coming is the most extensive campaign of targeted killing ever launched in history – and not against the suicide bombers,” said Bergman. “When the Shin Bet [Israel’s internal security service] and Israeli Air Force started to target the layer above them – the bomb-makers, the indoctrinators, the recruiters, the regional commanders – then it turns out that these people who have no problem with sending everybody to their death, once the price tag is attached to themselves and their families, they say, well, we’ll die, but maybe not today.”

The targeting approach, said Bergman, was adopted by the United States, whose military leaders came to realize that taking out the top leadership of the enemy was ultimately less lethal and costly than the alternatives.

“And so, the CIA started following the successful Israeli experience, started to perform targeted killings,” said Bergman. “Do you know the president who organized the largest number of targeted killings in history? Barack Obama, because he realized that this is the weapon that, at the end of the day, takes less human lives than going into an all-out war. And it’s effective.”

Leanne Hazon, Beth Tikvah’s vice-president of programming, welcomed the audience and noted the size of the crowd despite it being Super Bowl Sunday. Rabbi Adam Rubin introduced Bergman. The author signed copies of his book after his talk.