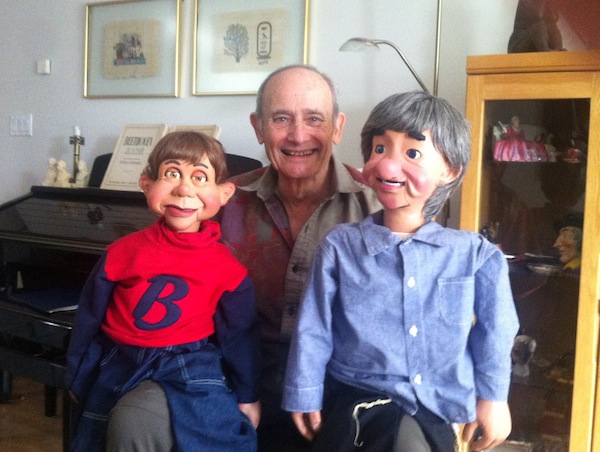 Stan Shear has been on countless stages with figures Benjy, Jasper and his original puppet, Danny, now retired at the Vent Haven Museum in Fort Mitchell, Ky. (photo from Stan Shear)

To walk into Stan Shear’s studio at his Oakridge home is to take both a step back and a step forward in time. A portrait of a penny-farthing hangs on the wall, old manuscripts and books line the shelves, yet in among the memorabilia is the technology he believes will connect the past with the future.

Shear is launching My Audio Memories (myaudiomemories.com), a project in which he takes recordings – some made in his studio, others that may have been passed down within a family – and combines them into a high-quality MP3 file on a USB stick.

His service is directed at private individuals and, because it is based in his home, he can create recordings at a cost far below those of commercial services.

The process is straightforward but requires a seasoned hand to deal with the production side, which, with decades of musical and engineering experience behind him, Shear offers.

First, you would go to his studio with stories you would like to record, along with any other audio files or recordings you might already have. These are then mixed together with various inputs and accompaniments – i.e., music and other sound effects – to capture the perfect backing for the end result. Finally comes the mastering, the stage that distinguishes a professional from an amateur recording.

“I can bring a recording to the highest level with the resources and experience I have to create a unique sound that will bring out all the hidden qualities of a person’s talents and make them come alive,” said Shear.

The cost of an individual project will vary depending on the amount of production involved.

The man behind the sound

Born in Pretoria, South Africa, Shear was a well-known pianist in his younger days. He appeared on SABC (South Africa’s national radio) on several occasions and, at the age of 19, performed the Beethoven C minor Concerto with the Johannesburg Symphony Orchestra. Playing in concert halls around the country during his youth, he later became a licentiate in music.

Shear, who came to Vancouver in 2004, remains a versatile entertainer and keeps a busy schedule. He plays a number of other musical instruments – guitar, harmonica, piano accordion and ukulele – and has had an active career as a singer, performing in solo concerts and singing with choirs.

In 1976, while still in South Africa, he became fascinated with ventriloquism after discovering a book at the library. Since then, he has been on countless stages, including the International Puppet Festival in Israel, with figures Benjy, Jasper and his original puppet, Danny, now retired at the Vent Haven Museum in Fort Mitchell, Ky. (See stanshear.com.)

He also has been officiating as a chazzan for 40 years, both in South Africa and Canada.

Together with his wife Karon, he is a practitioner of auditory integration training (AIT), a method for improving listening and cognitive skills. Their processes are used to help overcome learning disabilities and improve foreign language skills.

Shear has woven his own story into his new project. He divides his account into three periods, starting with his early, formative years, devoted to growing up, schooling and other events that shaped his life. This is followed by his post-secondary education and early career, and includes extracts from concerts and broadcasts.

The third stage comprises Shear’s mid-career to the present, a “mature” but nonetheless very fruitful time, with musical performances, ventriloquist shows and the My Audio Memories project, as well as his positive views on the future, as he sees it, in his senior years.

“I am following this up with a separate project of my memories of my parents, including recordings that I’m fortunate to have of my mom and dad and members of their families talking, singing and playing the piano,” said Shear. “My mom’s family were very musical and I’m lucky to have these recordings made on an early tape recorder by my dad, and transcripts of my dad’s memoirs, which he wrote.”