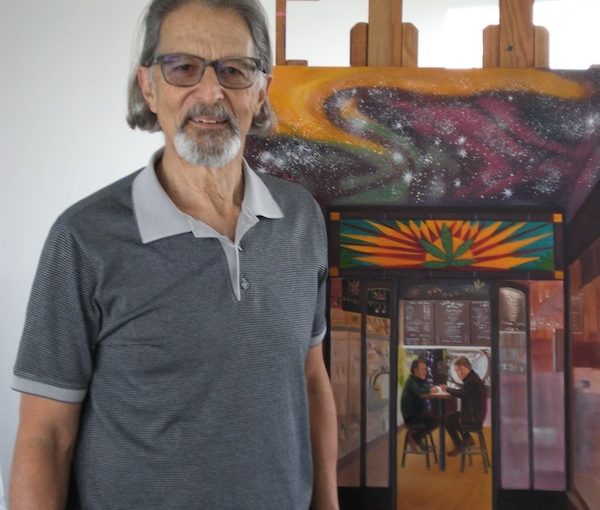 Jack Rootman, in front of his painting “Homage to Degas.” (photo by Olga Livshin)

“There are several reasons I’m interested in painting the night,” he said in an interview with the Independent. “First, I wanted to show human activity as it is spotlighted at night. People move from one light source to another, from the indoor balcony to the moving lights of cars. You don’t see it so focused during the day. When you look in the daytime, there is a panorama in front of you, your attention wanders; there is too much to see. But, at night, you see activity encapsulated. Someone drinks coffee. Someone crosses a street. Someone is sad or crying or laughing. Your attention is drawn to a spot of light.”

The second reason for his fascination with the nocturnal setting has to do with the constantly changing colours and contrasts. “There are many light sources wherever you are at night – streetlights, lights from the windows, moonlight – and each combination gives off different colour nuances and shadows, depending on where you stand, on the angle of your view,” he explained.

Rootman thinks an element of colour always exists, even at night, when there is a “dynamic blackness. If you look at my paintings,” he said, “there is red black and purple black, blue black and green black.”

Night’s more limited spectrum of colours intrigues and challenges the artist. “Of course, it is more difficult to paint night, to see colours in the darkness,” he said. “Sometimes, I have to use Photoshop to analyze what colours appear in a photograph, before I transfer the image to an oil painting.”

Rootman started painting night scenes years ago, although the bulk of the 22 paintings in the current exhibit have been created in the past five years. During his travels, he took many photographs at night in Paris, Venice, New York and Montreal. He also made sketches and recorded the colours as he saw them. But his paintings never follow the photos to the letter. One painting, a ribbon of light, might be an abstract representation of the night traffic along a boulevard, based on a photo taken from the balcony of his hotel room. Another might be a composition of images from different years and cities.

“My painting ‘Homage to Degas’ is one such a composition,” he said. “I saw this marijuana shop in Vancouver and it reminded me of a Degas painting. I included two of his paintings in this piece.”

In addition to the technical challenges of depicting a city scene at night, Rootman is interested in the loneliness that is most profound at night. “During the day,” he said, “we are at work, but the night brings isolation. It also brings possibilities – many people are lonely, and they go out during the night to meet others.”

Some of the paintings show this disconnection. Everyone is absorbed in what they are doing, alone in their own spots of light, talking on their cellphone or lost in thought, and darkness separates them from one another.

“The night is also traditionally associated with a sense of danger,” the artist mused. “Several paintings in this series are lanes, particularly lanes in downtown Vancouver. Anything could hide in such a lane, with insufficient light: from rats to human predators.”

While his lanes are bleak, despite the illumination of neon signs and streetlights, there is always hope in Rootman’s paintings. Perhaps his medical background brings that sense to the fore of everything he does, both in his professional field of eye surgery and in his art.

“My most comfortable mental state is when I’m doing something creative and visual,” he said. “It works for my art. It also worked for my job as a surgeon, before I retired. Surgery is very creative. Like art, surgery is a discovery. Nothing is ever as you expected.”

And, like in his medical practice, where every patient had a story, all of his paintings are stories, too, stories of danger and loneliness, separation and connection, all linked together by darkness and light.

“My work has a certain affiliation with music and poetry,” said Rootman. “That’s why I decided to have a music night and a poetry night as parts of this show.”

The music night with Amicus Ensemble will be held at the gallery on June 5, 6-8 p.m., and the poetry night the next evening, June 6, 6-8 p.m. Scene at Night is at the Visual Space Gallery until June 9.