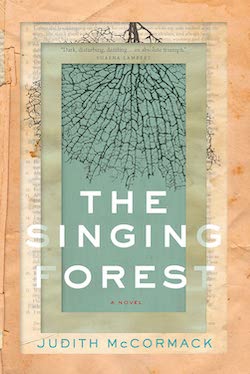 Say hello to Leah, the daughter of a man who disappears when she is a baby and a mother who dies in a car crash when she is 6 years old. She is placed in the care of her Jewish aunt during the week, and her three eccentric Jarvis uncles on the weekends – Rudy, Gus and Malcolm. This excerpt is a flashback – she is now a junior lawyer, working on the deportation of a war criminal, and Nate is a fellow junior in the firm.

You have no idea where he is? said the social worker. I don’t believe it for a minute, said her tone.

No idea, said Rudy. I’m sure he would be here if he knew.

In fact, he was not at all sure of this. The youngest brother, the father – witty and weak and self-absorbed. And a man who was afraid, desperately afraid of – what? Of being ordinary. Of leading a rye-and-ginger life. Chasing anything that might save him from this, like a distracted dog. A fugitive from the everyday, the commonplace, always searching for a way out.

He is far from sure of this either.

The aunt was the formal placement – the mother’s half-sister, 19 years older than her, almost another generation. But a woman whose kidneys were starting to fail, scarred organs slowly breaking down.

I can’t handle her full-time, she said miserably, exhausted by the disease.

The social worker knew enough – too much – about the foster home system to send the child into its labyrinths. So this arrangement would have to work – the aunt during the week, the uncles on the weekend. She did what could be done, the things that were possible. A session on child-rearing, simple advice, checklists on clothing, food, sleeping. The child was the only one who read the lists, though, or tried to – her small finger tracing out the letters she knew until the papers were stained and dog-eared. Hoping that somewhere in there were the clues she needed, the answers to what had happened, how her life had jackknifed so wildly. But she also passed along anything she understood to Gus.

A taciturn man, something that suited them both. He used words sparingly, as if he had only a limited supply, and was storing them for some future use. Instead, he preferred silence, or a range of silences: dusty silences, steep silences, warm silences.

A clam, said the social worker to her supervisor. But soon he became used to the child winding around his legs, and developed a clumsy affection for her. Not a man who was a good bet in other ways, though – someone with serial bankruptcies, an instinct for failure.

Raised by your uncles? Nate says in the same tone someone might say: raised by wolves? His voice is dark, slightly hoarse. He is intrigued by this odd household, intrigued as only someone with two card-carrying parents can be.

I raised her, says her aunt. They looked after her.

Anna Rubin. Puffy-faced, her skin floury, her dark eyes circled with shadows. Persistent in her own way, determined that the girl would know something of this other life, that she would have some sense of its latitudes and longitudes.

No such thing as half-Jewish. Don’t let me hear you say that. If your mother is Jewish, you’re Jewish. Halachah. Those are the rules.

Those are the rules, echoed the girl, curled under the woman’s arm.

But her aunt had more to say, much more. A personal mission, built around tzimmes and the ten plagues.

The girl held up a hand, raising her small fingers.

Only three, she said.

She was a literal child.

A selection of the best, said her aunt.

Behind the scenes, though, her kidneys were silently abandoning their functions, the toxins in her system slowly building. Soon – too soon – it was the uncles during the week, the aunt on the weekend.

Not even a Jewish disease, said her aunt disgustedly, her skin yellow.

No need to tell that social worker, she added.

What do you do when you’re there? Malcolm said once, not so much interested in the girl as the aunt, any possibilities for money.

We eat brisket, she said after a minute, the only thing that came into her mind. She had no words for this briny, tender woman, for her kitchen, her houseplants, vines running along mantels, trailing down shelves. For the moth orchids everywhere – windowsills, bookcases – leaning over pots, their grey air roots twisting around them.

Malcolm looked at her uncomprehendingly. The idea that the girl was half-Jewish, the idea of Jewishness itself was so foreign, so baffling to him – to all three of them – that they ignored it. They had an unspoken agreement to treat it as if it were an awkward genetic problem, something that was better left unmentioned. And after awhile, she understood that she was not to talk to them about it, that this was something she had – she was – with her aunt.

Is it only for girls? she said to her, early on. Being Jewish?

Who told you that? Full of men. Look at Moses. Look at Einstein. Look at Marvin next door.

Marvin – thinning hair, mild, someone who yawns a lot. Ida’s husband, content to drift in her slipstream. Neighbours.

She’s not the brightest, but she has a good heart. And he shovels my walk in the winter.

And Moses? Einstein? Other neighbours?

That night: Men can be Jewish, too, she said to Gus, putting her to bed.

He said nothing in an agreeable way.

Look at Moses. Look at Marvin.

She sighed, the world-weary sigh of a six-year-old.

Those are the rules.

Half-Jewish. This is unsound genetically as well, she discovers later in biology classes, not a matter of chromosomal halves. Instead, she has a mix of genetic variations, extending in all directions. If some of them mark her as a carrier of Tay-Sachs disease, Bloom syndrome and an inability to drink milk, one non-Jewish parent will make no difference. This is a mess of a genome.

A week after the motion. Nate is sitting on the arm of one of her office chairs, cracking pumpkin seeds in his teeth. Lime, chili, salt – I roasted them myself.

You’re distracting me, she says, although the truth is that she was already distracted. The stay motion has been stalking her thoughts, intruding everywhere. She is waiting for the decision, although this is a wholly pointless exercise – it could be issued tomorrow, next week, or even next month, especially if the judge decides to write extensive reasons, not at all improbable. Still, she feels suspended in the web of this case, in part because she is still possessed by the idea that if they lose, it will be her fault.

Unlikely, says Nate. Although not impossible.

Or that she will be blamed anyway, whether it is her fault or not.

Not quite so unlikely, Nate admits. Give me your hand.

She stretches out her palm, and he leans over and shakes some pumpkin seeds into it.

She studies them absently, and then puts them in her mouth.