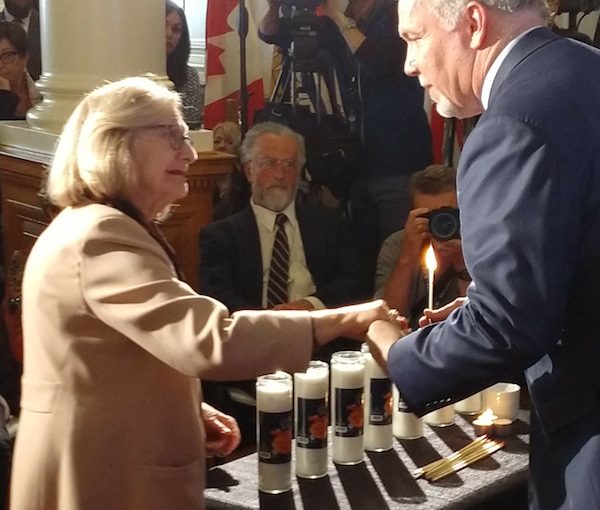 Holocaust survivor Rita Akselrod and Premier John Horgan at the Yom Hashoah commemoration that took place at the British Columbia legislature May 2. (photo by Pat Johnson)

The history of Jewish tragedy in the Holocaust – but also the heroism of Jews and non-Jews – was commemorated last week in moving ceremonies in Vancouver and Victoria.

Yom Hashoah, Holocaust Remembrance Day, occurred May 2 this year, coinciding with 27 Nissan in the Jewish calendar, the anniversary of the Warsaw Ghetto Uprising. A community commemoration convened by the Vancouver Holocaust Education Centre (VHEC) took place on the evening of May 1 at the Jewish Community Centre of Greater Vancouver. The following day, Holocaust survivors and others gathered in Victoria at the British Columbia legislature with the premier of the province and many elected officials in what has become an official annual commemoration.

“We need to remember that, if we do not stand together – Christians, Jews, Muslims, those who have no faith at all – if we do not stand together when hate raises its head, we will have failed not only those that have lost their lives so many decades ago in the millions, but folks who will come after us,” said Horgan. “We acknowledge the murders in San Diego and the tragic loss of life in Pittsburgh … in a synagogue there. We acknowledge the loss of Christian lives in Sri Lanka and the loss of Muslim lives in New Zealand. But, on this Yom Hashoah, we must always remember, in the presence of those who survived those horrors, that today we stand with you, tomorrow we will stand with you and forever we will remember the impacts of your lives and the consequences that you have lived for so many decades.”

Marie Doduck, a Holocaust survivor who lives in Vancouver, shared some of her life story with the audience at the legislature.

“Living in Brussels, Belgium, I was only three-and-a-half years old when my life was suddenly ripped apart and irrevocably changed by hate, by Nazism,” she said. “In 1939, our family, which was made up of 10 children – three were already married at the time with children of their own – were all separated by the scourge of war. We were all put into peril by the fact of our Jewishness – a crime under the rule of Nazis in Europe. We were marked for death by the accident of being born Jewish.”

She was hidden in a succession of non-Jewish homes and even in a Catholic convent.

“We had to run and to vanish in order to survive,” she said. “We became the children of silence. No talking, no crying, no disturbance – a blank mind with no feelings and no future. We lived only in the moment, felt nothing except hunger. Feelings like loneliness were a luxury. It was better not to feel. People and the world did not care. We were nothing – just Jews.

“This frightened little girl, Mariette, saw her beloved family disappear. My mother, Channah Malka, whom my firstborn is named after, and my brother, Albert, were deported to Auschwitz, where they were murdered. I saw my mother and brother being loaded into trucks…. That was the last time I saw either of them alive. Another brother, Jean, who was in the French Resistance, was hung by the Gestapo in the city square. Another brother, Simon, like hundreds of thousands, died three weeks after the war from the mistaken kindness of American and Canadian soldiers who liberated the camps and fed the fragile, thin and starving prisoners food that they could no longer digest.”

Like many survivors, Doduck’s experience is filled with close calls and fortunate near-misses.

“In order to survive, I jumped off moving trains and high buildings, was thrown into a sewer and was even hidden in a barn, where I took shelter in a bale of hay. I still bear the scar of being impaled by the pitch fork of a Nazi soldier searching there for Jews,” she said. “I lived mostly in darkness – literally – in dank cellars and other dark hiding places where the Nazis could not find me. When I returned to Brussels years later, I could not recognize the city in daylight, for my Brussels was a place of darkness.

After the war, Doduck immigrated to Canada as part of the War Orphans Project, the youngest of 1,123 Jewish children admitted to Canada in 1947 through an agreement between Canadian Jewish Congress and the federal immigration department.

“I arrived in Vancouver on Jan. 3, 1948, at age 12 and was taken in by a foster family,” said Doduck. “While I was warmly welcomed by the Jewish community and Canadian society – and grew up to be a proud Canadian – not everyone received a warm welcome when attempting to flee Nazi Germany. It was indeed the policy of many countries not to accept those seeking refuge.

“This is the important message that I share with students when I speak – that no society is immune to the dangers of discrimination and racism; and that we must work together to stand up when we see injustice in the world around us.”

B.C. Education Minister Rob Fleming, who emceed the event, noted the startling increase in antisemitic incidents in recent years and called for vigilance.

“Today also requires us to acknowledge the role that apathy and indifference played in enabling these atrocities to happen, the thousands of Jewish refugees turned away at our Canadian borders and the borders of other countries, the people who stood by and said nothing while their neighbours were hunted down in their homes because of their faith and identity,” said Fleming. “We come together to say never again.”

While mourning the atrocities, Fleming said, it is necessary to also remember the heroism of survivors and others who took the most dangerous risks to resist the dystopia of Nazism.

MLA Nicholas Simons played Kol Nidre on the cello to open the ceremony.

The evening before, the heroism of survivors was the topic of remarks from a member of the second generation. Carla van Messel, a board member of the VHEC, reflected on the lessons imparted by her father, Ies van Messel, who was a 5-year-old in Rotterdam, in the Netherlands, at the start of the war.

“Throughout my life, my father has demonstrated to me how to transform tragic memories into the strength to do good,” she said. “He taught my family that our Jewishness doesn’t make us evil or other and, therefore, by the same reasoning, neither should someone’s Germanness or Polishness or Arabness. He taught me that, if we don’t want something like the Holocaust to happen again, we have to continue to be better than the Nazis, and better than the nations who stood idly by. We have to actively protect all people … despite the history, despite the wounds, despite the deaths.

“As a second-generation survivor, I am energized by the examples of the survivors among us. They have inoculated us with their strength and resilience, with their will to turn bad into good. I want our survivors to know that they are leaving their memories, their essence, in good hands. Among the second generation are upstanding citizens of today’s very complicated world. They have taken the pain of their family’s personal history and transmuted it into the positive energy of tikkun olam. They continue to translate the hate of antisemitism into a hate of injustices: of racism, of bigotry, of sexism, of the demonization of otherness, of discrimination in all its many, many forms.”

The keynote address at Vancouver’s JCC was delivered by Lillian Boraks-Nemetz.

“Not a day passes when I don’t ask myself: Why did I survive when six million perished?” she said. “When 1.5 million [of the murdered] were children and, among them, my 5-year-old sister. And I survived. Why? When every European Jewish child was automatically sentenced to death by Hitler. I wonder: Was my survival a miracle? A twist of fate? The will of God? Why me?”

She detailed the series of close calls and fortunate happenstances that allowed her to survive, in part due to the persistence of her parents to do anything within their powers to save their two daughters.

The family was relocated into what would become the Warsaw Ghetto, sharing shelter with 20 other people in a three-room flat.

“Eventually, the ghetto grew more and more crowded – up to about 480,000 bodies in the small space of 1.3 square miles … with the lack of hygiene and medication, we were quarantined for typhus. Most of the boys and girls I played with died of the disease. Young children were dying on the streets; if not from illness, from starvation. Shabby and haunted people would simply pass by, powerless to help them,” she said.

“As 1942 approached, things got worse and worse. People out of desperation stole food from each other. I saw a woman carrying a bowl of soup when a man grabbed it. It spilled onto the pavement and the man fell to the floor licking the broth off the stones. All morality ceased to exist in an immoral, murderous universe of Nazi domination.”

As things in the ghetto deteriorated, Boraks-Nemetz’s parents bribed ghetto guards to allow young Lillian to escape. Her grandmother, who never entered the ghetto, had bought a little house in a nearby village, which she promised to give to a Catholic man who, in exchange, would let her live under his Polish name, ostensibly as siblings.

Boraks-Nemetz joined her grandmother and the man at the home.

“One night in the spring of 1943 we were outside in the yard, looking with horror at a blood-red sky above Warsaw,” she said. “We knew from a friend that it was the Warsaw Ghetto leveled to the ground by fire ordered by Hitler, after the courageous stand of the ghetto fighters against Nazi soldiers.”

Only after the war did she discover the fate of her sister.

“I found out that she was informed on by a Polish neighbour as a Jewish child and murdered by an unwilling Polish policeman who was commanded to do so, or else, by the Gestapo. The policeman found a ball lying on the street and threw it, telling my sister to run after it, then shot her in the back.”

While the Russians liberated her and her parents, Boraks-Nemetz said, the reality was not liberating.

“While adults worked to reestablish their lives, we children were left to grow up alone carrying the burden of experiences that nobody wanted to know about.… I was always told to forget and to let go by people who didn’t have a clue what was on my mind and in my soul. This was not a physical wound that results in a bruise or scab, which then falls off and mostly disappears. This was a branding on the Jewish soul with fire caused by man’s inhumanity to man, woman and child.

“It took me a long time after the war to realize myself as a human being who deserves to live and to be a Jew,” she said.

Philip Levinson, president of the VHEC board, introduced the procession of Holocaust survivors who lit candles in memory of the six million Jews murdered in the Holocaust. Cantor Yaakov Orzech chanted El Maleh Rachamim and survivor Chaim Kornfeld led Kaddish. Under music director Wendy Bross Stuart, violinist Nancy di Novo and the Yom Hashoah singers performed songs in Ladino, Yiddish and Hebrew. Sarah Kirby-Yung, a Vancouver city councilor, brought greetings from the city and read a proclamation. The evening ended as it does every year with the singing of “Zog Nit Keynmol,” “The Partisan Song.”