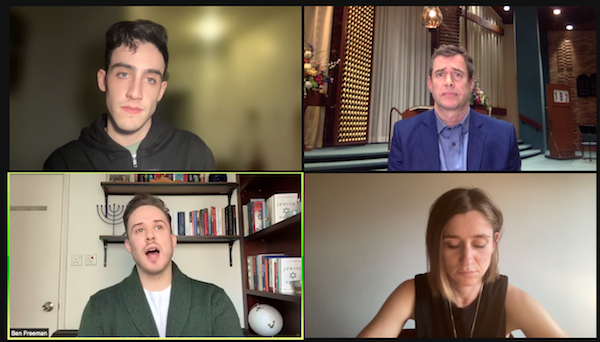 Blake Flayton arrived at George Washington University, in Washington, D.C., four years ago, from a progressive home where ideas were fodder for passionate debate and disagreement. He anticipated vibrant engagement and free- flowing discussion on campus. Instead, he came head-on with a progressive culture that viewed free thinking as apostasy.

It took Flayton some time to assimilate the cognitive dissonance he experienced when he realized his political cohort had an ideology that rejected dissent – and an almost universal antipathy to Israel.

“I believed them, because how could I not?” he recalled. “I figured to myself, if I agree with these people on A through Y, I must also agree with them on Z. They plant these pervasive lies into the heads of young Jews that your community lied to you, your community betrayed you, your community brainwashed you into believing something horrible and we are here to save you from it. Sounds awfully like Christianity, right? We are here to redeem you from that so that we can all walk into a more blessed future. It has such ancient themes.”

Flayton was one of three young Jews, all members of the LGBTQ+ community, who participated virtually in a Canada-wide panel discussion on Jan. 19 called Rainbow Maccabees: The LGBTQ+ Jews Leading the Fight Against Jew-Hate. They speculated on why an apparently disproportionate number of the rising young stars in the pro-Israel movement come from the queer community.

Flayton, co-founder of the New Zionist Congress and recently appointed director of new media for the Jewish Journal, was joined by Eve Barlow, a Scottish-born, Los Angeles-based music journalist, and Ben M. Freeman, an educator and the author of Jewish Pride, who is also Scottish and is now based in Hong Kong. They met in conversation with Ottawa-area writer David Sachs, in an event funded by Congregation Beth Shalom of Ottawa Legacy Fund and a Jewish Federation of Ottawa micro-grant. It was supported by 11 national, regional and local Jewish organizations across Canada.

Left-leaning social and political spaces are where gays and lesbians first found widespread social acceptance. For queer Jews, this longtime safe harbour has become less welcoming – and this might account for why a seemingly disproportionate number of the new, young activists standing up to anti-Jewish hatred come from the LGBTQ+ community, Flayton speculates.

Freeman said being an openly gay man may give him an advantage in standing up to Jew-hate. LGBTQ+ people have been forced to advocate for themselves, he said, while the prevailing tendency, in some Jewish circles, is to keep one’s head down and not make trouble.

The hypocrisy progressive activists often display in their treatment of Jewish people versus LGBTQ+ or other minority communities is something Freeman has faced.

“When I tell people that I’m gay, the first thing they say to me is, what are your pronouns? Are you gay, are you queer, are you LGBTQ+? They want me to define my own identity,” he said. “But when I tell people that, as a Jew, I don’t identify as white, although I understand that I benefit from the advantage of being perceived as white, I am immediately told, no that’s incorrect. That hypocrisy you just can’t ignore.”

“I saw the hypocrisy with people who claim to be about morally righteous causes and liberalism and who have this screaming a blind spot when it comes to anti-Jewish bias,” Barlow said.

As Jews and as queer individuals, Barlow and her co-panelists embody characteristics that are not always welcome in today’s progressive environment, she said.

“Intellectualism and individual thought is discouraged,” said Barlow. “We are doing what so many people in social justice spaces have been actively discouraged from doing, which is having our own ideas about what we think is right and wrong.”

Barlow stressed that she has had to pick her battles, in part because she realizes that tormenting Jews online, rather than good-faith debate or actual persuasion, is the goal for many.

“The more that you are on the other side of antisemitism, the more you understand the love that people who hate Jews have for picking on the Jew and tripping the Jew up and making the Jew feel small and bad,” she said. “It’s this pleasure that they get out of their antisemitic rhetoric.”

In the antisemitic mind, “the Jew” takes the shape of whatever the perpetrator fears most, said Freeman.

“It’s not about us as Jews, it’s about the ideas of Jews,” he said. “If you are a society which is positioning itself as capitalist, the Jew can represent communism. If you are a society that is communist, you can frame the Jew as the capitalist. If you’re a society which views white people as the apex predators, then Jews are white. If you’re a society that views non-white people as conspiring to bring down Western society, white society, then the Jew is not white.… All these different forms share a common core. They are saying basically the same things about us, expressed in a slightly different language.”

As a people who have maintained a particular identity across millennia and continents, Jews exemplify a stubbornness that resists assimilation, which can enflame some people. Similarly, because Jewish security and social flourishing has been most assured in liberal, democratic societies, Jews have a vested interest in perpetuating stable societies, so are often targeted by those who seek to subvert them.

“There is a very strong association between antisemitism and illiberal ideologies, ideologies that hold contempt and disdain for institutions of liberal democracy and that hold contempt for the ideas that come from liberal democracy, like meritocracy, like freedom of speech, like academic freedom, like gender equality, etc., etc.,” said Flayton. “Jews have often been portrayed, or at least been treated, as a proxy for these institutions.… Today, there is illiberalism bursting out of every corner, from the farthest you can go left on the spectrum to the farthest you can go right and everywhere in between. There is a rise in populism, there is a rise in anti-intellectualism, there is a rise in anti-establishmentism and it’s been replaced with conspiracy thinking and grievance politics.”

Throughout Jewish history, Flayton continued, there have been repeated attempts by various ideologies to convince Jews that they will be better off if they abandon their uniqueness and assimilate into the new orthodoxy – or, conversely, that the Jews’ refusal to do so is the primary inhibitor of progress or the impediment to utopia.

“Of course, that’s never the case,” he said, citing instances from the Hellenizing ancient Greeks in the Hanukkah story, to the Christians who are convinced that Jews are holding humanity back from salvation by refusing to accept Jesus, to the Soviets, who camouflaged antisemitism in the guise of anti-Zionism.

Today, said Flayton, this takes the form of Jews being told that, if they only reject Israel or check their Zionism at the door, they will “be granted a seat at this table of diversity, equity and inclusion and that everything will be grand and the Jews will be protected, if only they give up their birthright to the land of Israel.”

He concluded: “It never works and, in fact, the Jews who were so vehement are not spared from antisemitism at all, because once the ideology has succeeded there is no longer any use for them.”

The event opened with greetings from Idan Roll, Israel’s deputy foreign minister, who is himself a young, gay Jew.