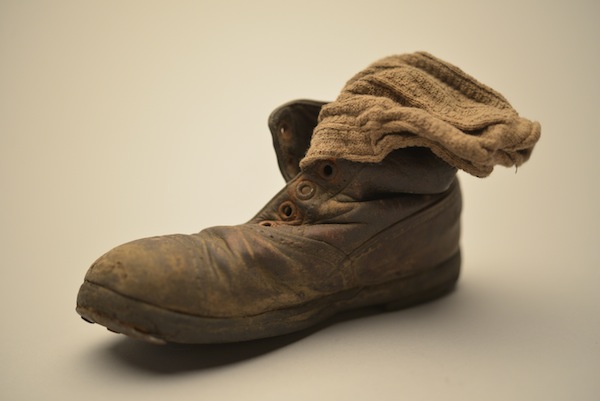 This child’s shoe and sock were found in January 1945 among thousands of others at Auschwitz-Birkenau, abandoned by the Nazis as the Red Army approached. (photo from Collection of the Auschwitz-Birkenau State Museum, Oswiecim, Poland. ©Musealia)

On display now at the Museum of Jewish Heritage in New York City, the exhibit Auschwitz: Not Long Ago. Not Far Away is the most comprehensive Holocaust exhibition ever mounted in North America about Auschwitz. Dedicated to the victims of the death camp, the goal of this exhibit is to make sure no one ever forgets.

A study conducted by the Conference on Jewish Material Claims Against Germany reported that 41% of Americans and 66% of millennials say they don’t know about the Auschwitz death camp, where more than a million Jews and others, including Poles, Sinti and Roma, Soviet prisoners of war, homosexuals, Jehovah’s Witnesses and others, were executed. And 22% of millennials say they haven’t even heard of the Holocaust.

“Seventy-three years ago, after the world saw the haunting pictures from Auschwitz, no one in their right mind wanted to be associated with the Nazis,” Ron Lauder, founder and chair of the Auschwitz-Birkenau Foundation Committee and president of World Jewish Congress, said. “This exhibit reminds them, in the starkest ways, where antisemitism can ultimately lead and the world should never go there again. The title of this exhibit is so appropriate because this was not so long ago, and not so far away.”

The exhibition consists of 20 galleries spanning three floors, and features more than 700 original objects and 400 photographs. They are on loan from more than 20 institutions and private collections around the world, as well as the Auschwitz-Birkenau State Museum in Poland.

An audio guide given to each visitor upon entry details the items on display. Visitors will see hundreds of personal possessions, such as suitcases, eyeglasses, photos, shoes, socks and clothes that belonged to survivors and those murdered at the concentration camp. In one glass case, a child’s shoe is on display with a sock neatly tucked inside. We are left to wonder, who put that sock in the shoe and were they expecting the child to shower and then retrieve it?

Auschwitz was located 31 miles west of Krakow in the small southern Polish town Oswiecim, which dates back to the Middle Ages. Jews were a part of its society for centuries. Auschwitz-Birkenau was conceived and initially constructed to house 100,000 Soviet prisoners of war and slave labour, before it became a factory of death. The architect who designed the camp was Fritz Ertl, a native of Austria. Ultimately, some 1.1 million Jews and thousands of others were killed there. Many who arrived at Auschwitz were sent directly from the overcrowded, sealed, windowless boxcars to the gas chambers and crematoriums.

There are videos throughout the exhibit, including one of Hitler and a large adoring crowd. There’s a concrete post that was a part of the fence at the Auschwitz camp, and a part of the original barrack for prisoners at the killing centre.

A German-made Model-2 boxcar, like those used to transport people to Auschwitz, sits outside the museum. In a video, survivors talk of the horrible conditions and stench inside those boxcars.

Viewers can see the operating table, test tubes and instruments used in medical experiments. There’s a gas mask used by the SS and a model of a gas chamber door used in crematoria 2, 3, 4 and 5 – and testimonies from survivors of the camp. To show the striking contrast between the victims and the perpetrators, there are photos of Rudolf Hess at his nearby residence with his family enjoying the outdoors.

Nazi ideology and the roots of antisemitism are traced from the beginning, to understand what happened before the gas chambers were created. Discrimination and bigotry against Jews existed long before Hitler came into power, of course. In one room, there’s an anti-Jewish proclamation issued in 1551 by Ferdinand I that was given to Hermann Göring for his birthday by German security chief Reinhard Heydrich. The proclamation required Jews to identify themselves with a yellow ring on their clothes. Heydrich noted that, 400 years later, the Nazis were completing Ferdinand’s work.

In a video seen near the end of the exhibition, Holocaust survivors urge people to refrain from hate and to work for peace.

This exhibition was in Madrid before coming to New York. This important and moving must-see exhibition is both a reminder and a warning.