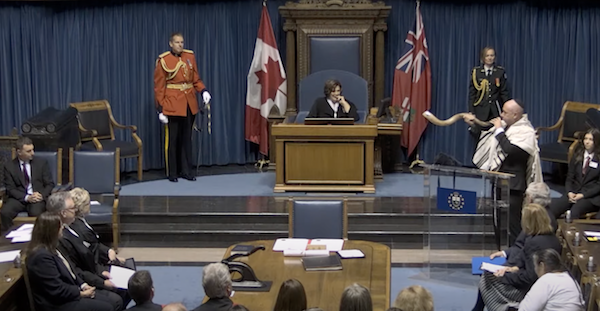 Anita Neville’s swearing-in ceremony on Oct. 24 included the blasts of a shofar blown by her rabbi, Anibal Mass. (screenshot)

Anita Neville says she “feels the responsibility” of being the first Jewish person to be appointed as the lieutenant governor of Manitoba – an office she was sworn into on Oct. 24, using a Hebrew Bible.

For the next five years, the vice-regal residence in Winnipeg will be where Neville calls home. And she was quick to start carrying out official duties like laying the first wreath during the province’s Remembrance Day ceremony, and reading the government’s Speech from the Throne to open a new Manitoba Legislature session on Nov. 15.

“The whole thing is new. The protocol is new. I’m fortunate that there are very knowledgeable, experienced people around me, so that makes it easier,” Neville told The CJN Daily in an interview from Government House, acknowledging that she has a steep learning curve for her new role.

Which is why, shortly after her swearing-in, Neville flew off to attend a round of orientation meetings. She also learned that she will be going to Buckingham Palace, at some point, to present her credentials to King Charles III.

“There are three others who have not presented their credentials to the monarch, so there are four of us in line,” said Neville. “I don’t know where I am in the order, but I look forward to it very much.”

Neville was at her cottage with her grandchildren in July when Prime Minister Justin Trudeau called to offer the position. She took time to think about whether she wanted this very public role. After all, she already had a fulfilling career in community service, including as chair of the city’s public school board, and then 11 years as the Liberal member of Parliament for Winnipeg South Centre, from 2000 to 2011. She’s also deeply involved in Jewish community matters, with her synagogue Shaarey Zedek, and the Jewish Heritage Centre of Western Canada.

At first, some members of Neville’s family were worried the new position might be too much for their 80-year-old mother and grandmother.

“I’ve got a very bad back,” she said. Neville walks with the assistance of a cane.

But her decision was made after she thought about her grandparents and her roots, having been born in the traditional Jewish immigrant neighbourhood in the North End of the city, then growing up after the Second World War, when barriers to advancement still existed for Jews.

What clinched it was when a grandson scolded her and said, “How could you not take the job? How many people get this opportunity?” Neville felt that she didn’t “want to lose face with Aaron.”

Considering saying no was “beyond his comprehension,” she said.

The 26th lieutenant governor in Manitoba’s history made sure to put her own stamp on the official swearing-in. The formal ceremony was full of Jewish symbolism.

It not only involved her choice of Bible to swear the oath, but it also had the piercing blasts of a shofar blown by her rabbi, Anibal Mass – who delivered blessings and then led the audience with a loud “Mazel tov!”

The opportunity is something the daughter of Russian Jewish immigrants in Winnipeg’s North End never dreamed would be possible for somebody with such origins.

In her speech, Neville told the audience that her grandparents fled Bessarabia and Odessa a century ago, to escape a climate of murderous antisemitism, and to find freedom and opportunity in Canada.

“I wanted … the larger community of Manitoba to be aware of who I am and where I came from,” she said. “I did it thoughtfully. I don’t think I was over the top.”

It wasn’t only having Jewish rituals that marked a departure from previous swearing-in ceremonies. Neville pushed to include Indigenous people in the program, which she claims is the first time this has happened. It stems from her own decades of work on their behalf, and it will likely be a key part of her mandate.

An Indigenous elder, Myra Laramee of the Fisher River Cree Nation, delivered an invocation during the ceremony, and even called her longtime Jewish friend by the title of “Auntie.”

Neville’s swearing-in also came just three days before the Manitoba government adopted the International Holocaust Remembrance Alliance definition of antisemitism, becoming the fifth Canadian province to do so. (Canada adopted it nationally in 2019.)

While she did not have anything to do with the timing, and did not work behind the scenes on that file, Neville agrees both things are good for Jews.

“I think, for the Jewish community, it is a signal of positive acceptance, integration,” Neville said. “Not that it wasn’t there before, but it’s a kind of stamp. It’s like getting a check mark.”

Neville isn’t the first Jewish person to hold a similar appointment in Canada: that milestone was pioneered by Myra Freedman, who served as Nova Scotia’s lieutenant governor from 2000 to 2006. (Freedman held Shabbat dinners at the official residence and kept kosher.)

For her part, Neville plans to install a mezuzah at the entrance to her private quarters when she moves into the century-old Government House. And she won’t serve pork or shellfish.

When she was initially appointed, a friend immediately called

her, half-jokingly anticipating an invitation for the fast-breaking meal at the end of Yom Kippur. All Neville can say to that for now is, “We’ll see.”

Neville is a long-standing supporter of Israel, and her appointment comes amid rising antisemitism, including a torrent of hate for Israel and Zionism.

B’nai Brith Canada’s annual audit reported 223 anti-Jewish incidents in Manitoba last year, up from 92 in 2020, and 83 the year before that, according to Janna Minikovich, a spokesperson for the group.

Does Neville fear becoming a target for anti-Jewish sentiment in her new role? During her days in Parliament, she remembers receiving some hate mail, but she declined to comment further on her current opinions on Israel, besides describing those views as “centre left.”

Neville co-chaired the Liberal Parliamentarians for Israel caucus when she was an MP. Moreover, in the House of Commons, she raised the plight of the 800,000 Jewish refugees expelled from Arab lands, saying people needed to pay attention to this historic injustice.

But she also criticized Stephen Harper’s Conservative government for cutting federal funding to KAIROS Canada, an aid agency supported by several churches. The group supports the boycott, divestment and sanctions movement against Israel as a method of combating what it considers oppression of Palestinians. (Neville said at the time that, without clear explanations of the change in funding, it appeared Canada was stifling criticism of Israel.)

Neville has long been an advocate for social justice causes. One that is dear to her heart involves her work with a Jewish-led rescue organization in Winnipeg, Operation Ezra. The group has worked with other faith communities since 2015, to help bring 65 Yazidi refugees to Canada. (The federal government has brought in hundreds more under a federal sponsorship program starting in 2017.)

In between rehearsals for the Speech from the Throne and planning her move-in date to her new quarters, Neville made sure to turn up at the Winnipeg airport to greet the latest new arrival.

Ayad Alhussein, now 13, was captured by ISIS forces in 2014 – along with his entire family – when the Islamic extremists took over much of Iraq and Syria and set up a caliphate. Yazidis are not Muslims, and they were ordered to convert, or be killed. Ayad was just 5 years old at the time, and was kept prisoner for five years, until he escaped. He had been living in a displaced persons camp in Iraq, while two of his surviving sisters made it to Canada.

According to Michel Aziza, co-chair of Operation Ezra, it took constant pressure by the committee on local MPs and on immigration officials to get Ayad’s paperwork processed. “The world moved on, from Yazidis, to Afghans, to Ukrainians,” said a frustrated Aziza after Neville welcomed the slightly overwhelmed teenager.

Scenes like this underline why Neville’s swearing-in speech referred to her core values of “tikkun olam and tzedakah,” referring to herself as a descendent of refugees.

“I know that the Jewish community … because of what [feedback] I’ve received, has been very happy and very pleased with my appointment. And I feel the responsibility of it, let me tell you.”

To listen to Ellin Bessner’s podcast with Anita Neville, visit thecjn.ca/news/anita-neville-profile. The swearing-in ceremony can be viewed at youtube.com/watch?v=d0i3C2lce-g.