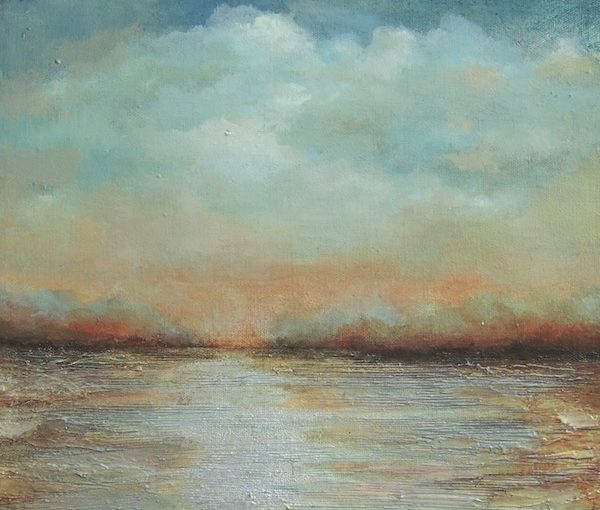 Two of artist Monica Gewurz’s paintings – “Silver Marsh” (above) and “Dawn II” – are featured in the exhibition of the Nature Trust of British Columbia’s Artist of the Year Award. “Silver Marsh” was inspired by a sunset at Addington Point Marsh, one of NTBC’s properties, which aims to conserve waterfowl and fish habitat, and “Dawn II” by a visit to Vaseux Lake in the Okanagan, an NTBC property that protects habitat for bighorn sheep and other threatened species.

Before turning her focus to art in the past several years, Gewurz had worked in both the public and private sectors, in areas from commercial real estate to tourism to aboriginal issues. However, art was an integral part of her upbringing in Peru.

“For my parents, art was as important as science,” Gewurz told the Independent. “My mother was also an artist, and she exposed me to art at an early age – not just Judaica and Peruvian art but also art from different cultures. We traveled a lot. I always enjoyed visiting museums and art galleries. And I always had my camera with me, always took pictures. Landscapes and close-ups, textures and patterns always fascinated me.”

Upon graduating high school, however, she chose a different path.

“In the early 1970s, I was studying to become a veterinarian in Peru. At that time, South America went through some economic and political unrest,” she said. “Peru had a military government, and antisemitism was on the rise. My university was hit repeatedly with strikes and class closures. Getting an education was becoming difficult and dangerous. That was when I decided to move to Canada. With my parents’ financial support, I came alone to continue my studies at the University of Guelph. My parents immigrated later, in 1985.”

After university, Gewurz worked for the Canadian government, but she couldn’t abandon her art. “My photography, jewelry and painting all started as hobbies. I needed an outlet to balance my hectic and stressful full-time job…. In 2000, I started making tribal and sculptural jewelry. I was successful enough to showcase my pieces in national craft shows and then commercially in some galleries, here in Vancouver and in the U.S.”

She knew that most professional artists had formal art education, so she enrolled at Emily Carr University of Art + Design in 2011. “I could study there part-time while working,” she said. “It would also allow me the opportunity to meet other artists.”

She finished her studies at Emily Carr in 2016. Coincidentally, she couldn’t continue at her government job for much longer. “Due to a life-threatening autoimmune illness, in 2017, I had to retire,” she explained. “That gave me the opportunity to embark on a new career as a professional artist.”

Gewurz’s paintings are mostly abstracts, reflecting the landscapes of the West Coast. “The force and energy of water and its associated reflective light, the interplay of shadows and colours in a landscape, have always drawn me in as a scientist and an artist,” she said. “The endlessly changing skies and the patinas of precious minerals mesmerize me. I am fascinated with the contrasting nature of life. I paint it all to provide an escape to a dream-like place.”

Fractals in nature and stylized figures frequently populate her paintings. She doesn’t strive for photographic correctness. “Painting in abstract challenges me to represent reality in a veiled, mysterious and intriguing way,” she said. “Abstraction and the use of texture allow me the freedom to change what I see and feel into my own expression. The artistic process is, for me, one of constant discovery and conversation. The painting speaks to me, tells me what it needs, and I respond.”

Although initially she used brushes, she said, “Lately, I transitioned to using mainly a palette knife and other unconventional tools. As a result, my art became more abstracted and complex.”

She bases her paintings on her own photographs and on her memory; she never paints on location. “I paint from the heart and intuitively,” she said. “I don’t paint anything specific in a landscape and that’s what I love about it – the process of being able to use the paint any way I want. I leave out a lot of visual information. That allows the viewers to use their imagination, to see and describe every painting in their own way.”

Gewurz gifts much of her art to charities and friends. “It is exciting for me to witness the connection some of my ethereal-looking paintings elicit in viewers,” she said. “It humbles me, when people I’ve never met immerse themselves in the layers, shades and textures of my paintings and then share with me how they are seduced into a visual, tactile and emotional response. When such a connection is made, I feel that I accomplished my mission. Of course, the cherry on the cake is when somebody buys a painting and becomes a collector and, many times, a friend.”

She shared one such a case. In 2014, an interior designer from Singapore saw one of her mixed media paintings at an exhibit and contacted her for a commission. The painting was two by two feet, said Gewurz, “but she wanted a much larger one, measuring seven by four feet, for her client, a new five-star hotel in Hong Kong. That was a turning point in my career and a huge jump in scale for me. That painting still hangs in their lobby.”

Mixed media seems to be Gewurz’s preferred style. She incorporates in her pieces ancient and modern materials, such as textiles, sand, rust, aluminum foil, copper and silver. She paints in multiple layers to seduce viewers in visual and visceral encounters. But, whatever the materials, her theme remains predominantly nature.

Gewurz’s love of nature led to her involvement with the Nature Trust of British Columbia (NTBC). “I am a donor and volunteer,” she said.

She is also an active member of the Federation of Canadian Artists (FCA).

“One of the main FCA missions is to outreach and raise awareness about conserving the environment and natural spaces,” she said. “Every year, FCA asks their membership to submit a proposal for a show that deals with social and environmental issues. I submitted the idea to have a joint show with NTBC, as they had a common vision, and also to take the opportunity to celebrate their respective anniversaries. Both director boards reviewed and accepted my proposal.”

Of course, she longed to participate in the show as well, since its underlying purpose – the conservation of British Columbia’s endangered habitats – is close to her heart.

“FCA holds several juried shows every year,” said Gewurz. “I regularly submit and often get juried in to showcase in them. This time, I applied as well. I was thrilled and honoured that two of my paintings were admitted. There was a lot of competition.”

Gewurz’s commitment to environmental issues extends beyond her participation in such shows and groups.

“I use upcycled materials in some of my mixed media art,” she explained. “There is beauty in repurposing materials because of their distinctive uniqueness and imperfect textures. Also, the fact of my using them conveys the message to the viewer about the importance of decreasing waste and minimizing our carbon footprint.”

She added, “Art can certainly open people’s eyes to how much our lifestyles imperil the planet. Art could encourage all of us to make positive changes.”