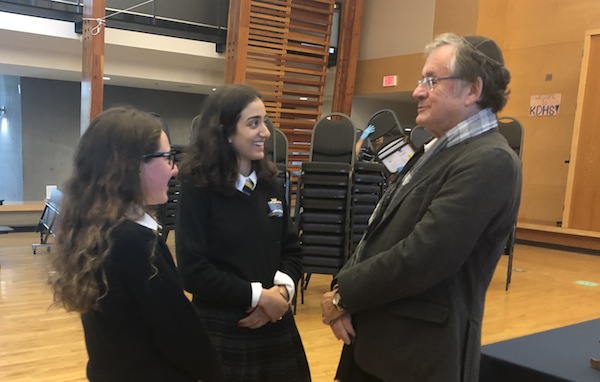 On May 2, King David High School marked Yom Hashoah at its annual assembly commemorating those lost in the Holocaust. This year, for the first time, the school hosted Grade 10 students from Alpha Secondary School in Burnaby.

The morning began with prayers for the victims of the recent Poway shooting in San Diego. After a minute’s silence, the assembly commenced with a procession led by child Holocaust survivor Dr. Robert Krell. Each of the five KHDS students in the procession carried a candle.

Originally from The Hague, Krell is founding president of the Vancouver Holocaust Education Centre and an educator and advocate for the centre’s programs. He is also professor emeritus, department of psychiatry, University of British Columbia, and distinguished life fellow of the American Psychiatric Association. He was introduced by KDHS students Estie Kallner and Mattea Lewis, his granddaughters. They spoke of their grandfather, thanking him for the “privilege” of hearing firsthand stories of the Holocaust.

Krell began his talk holding up a black and white photograph of himself as a baby. “Who was the enemy of the Third Reich?” he asked the audience. “This,” he said.

Krell was born when Holland was already occupied by Nazi forces. Indeed, the hospital he was born in was already partially confiscated by the Gestapo. He described how restrictions were imposed rapidly, every mundane aspect of Jewish life being placed under more and more stringent rules. Deportations began in 1942. Speaking of the local Jewish population being assembled for the euphemistically named “resettlement in the east,” he said, “No one panicked sufficiently.”

Krell went on to describe how, as family friends began to disappear, his “rather astute” parents fled their home, taking few possessions. “What would you grab?” he asked. His parents abandoned their photo albums because, in enemy hands, they would give away too much personal information.

Placed in the care of a local Dutch Christian family, Krell learned to call the parents Mother and Father. He described them as “the most wonderful people on earth.” With them, he said, his life was “comparatively normal.” That said, with the ever-present risk of betrayal, as a dark-haired child in a sea of blond heads, he was very noticeable. He was not allowed to look out of the apartment windows; there were Dutch Nazi sympathisers living within sight of his adoptive home.

One of the most powerful aspects of the lecture were Krell’s insights on human memory and identity under conditions of extreme stress. He described his recollections as “fragmented, not fully formed” and, while his young mind didn’t appreciate the extent of the horrors being committed outside, he said, “I knew something was wrong because I was part of another family.” His mother, he explained, remembered nothing of that period. Having given her young son over to a Dutch Christian, he said, “She was in shock for three months.” He spoke in the present tense of how his real identity vanished in hiding. “I melt into the family.”

As an adult, his adoptive sister, Nora, also buried some memories, which led to a conflict with Krell. He recalled being taken to visit his mother by Nora but Nora said she had never done that. This was a way of “denying me my memory,” he said, adding that this denial causes grievous harm to the psyche. Even though we have fragmented memories, he said, “we don’t want to give them up because they are part of who we are.”

In the end, the disagreement was resolved. Nora had indeed taken Krell to see his mother. Twice, he was nearly discovered and twice he narrowly escaped, first by covering his head with a blanket and, the second time, by hiding under a bed.

His years in hiding were characterized by unease, a looming sense of fear and constant hyper-vigilance. After the war, his family moved to Vancouver, leaving behind Holland, which he said he viewed as “a place of death.” He described himself as “the most eager immigrant-in-waiting that ever existed.”

Once in Canada, Krell reinvented himself, hiding his shyness behind outward charm and sociability. He said he became resilient, ignoring illness and pain, striving to forge a new life, a family and career for himself.

He spoke of the medical advice he received when dealing with overwhelming feelings – “You should get rid of your obsession with the Holocaust.” Instead, he helped found the Holocaust Symposium for high school students and facilitated the recording of 140 testimonies from survivors.

Following the lecture at KDHS, Krell answered questions from students, concerning Holocaust education today, as well as why it is that some people hid Jews and put their own lives at risk. Krell referred to “common decency,” adding that his own rescuers “didn’t know the precise nature of the unfolding danger, but once they had me, they were committed.” He told the students that, in spite of the “showcase” of the Nuremberg trials, “there is no justice.” And, are we at risk today? “Massively.”

In his closing comments, Krell shifted from storyteller to teacher, using the narrative of his life to guide the students in theirs. “Learn your history,” he said. “In it lies everything to secure the safety of your children and grandchildren.”

He said, “Without engaging with the Holocaust, you are at great risk of becoming an under-educated person, and that makes you vulnerable. This mass murder took doctors, lawyers. Physicians were killing children in 1938. It was the doctors, engineers, architects. Each of the professions we trust for our safety. They all worked in the service of mass murder. Safeguard your professions from sliding into the abyss. It happens so quickly.”

Grade 12 students Edden Av-Gay and Gali Goldman spoke with Krell after his talk. Av-Gay was struck by how “one person could experience so many miracles in his life, especially someone born into such hardship” and said, “His story is truly amazing.”

Goldman, who had recently given a class presentation on youth movements during the Holocaust, had heard Krell tell his story before. She said she was still touched by how “he lost so much but he has devoted his life to teaching about what he went through, even though it was horrific. He can still find parts of his story that were miracles.”

Asked about Krell’s decision to speak about his past, Av-Gay said, “I think it’s not a matter of him being comfortable telling his story, I think he feels obligated to do it, to share his past, to show what happened to six million Jewish people.”

Alpha Secondary Grade 10 student Amy Ricker said she found Krell “motivating and inspiring.” Ricker, who hopes to become a humanitarian lawyer, said she “teared up because he showed me how in the dark I have been, and how much I want to help people.”

One perhaps surprising message in his talk was a warning about tolerance.

“If Jews were ‘tolerated’ in Holland, and the result was the deaths of over 80% of the Jewish population,” he said, “then we have to do much better than just tolerance.”

As he finished his lecture, he said, “Realize what you have. Thank your parents and tell your irritating siblings that you love them. I urge you – be kind.”