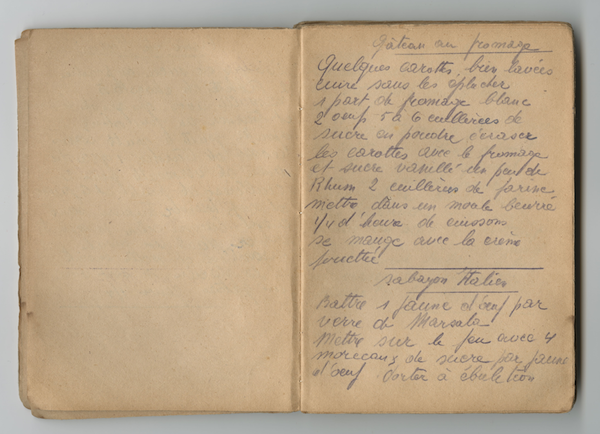 Rebecca Teitelbaum’s recipe book was compiled in Ravensbrück concentration camp, Germany, circa 1940s. It is from the Teitelbaum, Buckman family fonds, VHEC Collections.

This article is based on remarks delivered at the screening of the film Who Will Write Our History on International Holocaust Remembrance Day.

The Vancouver Holocaust Education Centre (VHEC) was honoured to partner with the Vancouver Jewish Film Centre and the Peretz Centre for Secular Jewish Culture for the screening of Who Will Write Our History (2018, directed by Roberta Grossman) that took place on Jan. 27 at the Peretz Centre.

Jan. 27 marked the 74th anniversary of the liberation of the death camp at Auschwitz-Birkenau. This date was first commemorated in 2005 by the United Nations General Assembly as International Holocaust Remembrance Day.

Around the world, thousands of individuals observe International Holocaust Remembrance Day to honour the six million Jewish victims of the Shoah and millions of other victims who were brutally murdered by the Nazis and their collaborators. Many organizations worldwide take this day as an opportunity to raise awareness of the Holocaust and to offer educational programs to help prevent future genocides.

The VHEC also gathered with local survivors of the Holocaust a few days prior to the film screening to commemorate the victims of the Shoah. The survivors remembered their beloved mothers, fathers, brothers, sisters and other family members who perished during the Shoah, as they lit candles and said prayers.

When students from all over the Lower Mainland visit the VHEC, they frequently ask about resistance against the Nazis during the Holocaust. We all know too well what the consequences of resistance were in the Nazi-occupied countries. But what exactly did resistance in the context of the Holocaust mean or look like? When people hear the word resistance, often, they think of physical, armed resistance, as it occurred, for instance, during the Warsaw Ghetto Uprising in 1943, or by brave partisan fighters, who fought the Nazis and their collaborators and blew up Nazi train tracks and other infrastructure. However, there were forms of defiance that were more subtle.

Let me give you two examples of defiance that one may call cultural or spiritual resistance during the Holocaust.

Rebecca Teitelbaum (born 1909), from Belgium, was kept in Ravensbrück, a concentration camp for women. In secret and at great risk, she stole small pieces of paper and a pencil from the Nazi office of the camp. She also traded food for a needle and thread. At night, together with other women from her barrack, she wrote down her favourite recipes and filled 110 pages with what reminded her of better times with her family. She then sewed together the pieces of paper into a book. Upon its completion, the women took comfort reading the recipes out loud.

Sarah Rozenberg-Warm (born 1923), from Poland, was a slave labourer at a Nazi munitions factory in Skarzysko-Kamienna, Poland. Living conditions in the camp were terrible. One day, a fellow inmate stole pieces of metal and, instead of creating munitions for the Nazis, he created a mirror, a ring and a comb for Sarah, risking his life to do so. Perhaps, he wanted to make Sarah feel like a human being again as she looked in the mirror, in times when she was treated in the most inhumane way imaginable. Perhaps, through the seemingly small gesture of creating these gifts for Sarah, the inmate succeeded in giving Sarah hope for better times, and strength to carry on.

Both Rebecca Teitelbaum’s recipe book and Sarah Rozenberg-Warm’s mirror are currently on display at the Vancouver Holocaust Education Centre as part of the exhibition In Focus: The Holocaust Through the VHEC Collection and serve as examples to students and the general public about cultural and spiritual defiance.

Jewish defiance was also expressed through efforts to perpetuate Jewish culture and maintain humanity in the face of attempted annihilation. Spiritual resistance in ghettos and camps included clandestine prayers and the creation of artistic works and books. In some ghettos, underground schools were formed, and secret archives were established to document the Holocaust.

The film Who Will Write Our History gives us the opportunity to learn more about an extraordinary example of Jewish defiance during the Holocaust through the attempt of preserving diaries, documents and papers in the secret Oyneg Shabes Archive created by Dr. Emanuel Ringelblum and his fellow inmates. It is a film worthwhile seeing.

Dr. Ilona Shulman Spaar is the education director at the Vancouver Holocaust Education Centre and the curator of the exhibition In Focus: The Holocaust Through the VHEC Collection, on display at the VHEC until June 2019. Find out more at vhec.org.