Albert Londres was a Parisian journalist born in 1884. He became an international reporter who chose to chronicle human suffering and expose injustice and cruelty. He denounced inhuman conditions in mental asylums, the ordeals of black workers, conditions in a penal colony. His journalistic philosophy: “our profession is not to give pleasure nor to do harm; it is to twist the pen into the wound.”

Why was I drawn to Londres’ The Wandering Jew Has Arrived (Gefen Publishing House, 2017)? For one, I had spotted it in Israel and it was produced by Gefen, a familiar name in the publishing world. Its founder, Murray Greenfield, his late wife, Hana, and I once visited Terezin together and his son, Ilan Greenfield, published a book about the Buchenwald boys I co-wrote with Judith Hemmendinger back in 2000.

Secondly, I quickly read the introduction by Rav Daniel Epstein. He described Londres as a non-Jewish Parisian reporter with an insatiable curiosity. He wanted to inform his French readers, “nurtured for centuries on a teaching of contempt and antisemitic clichés,” about the world of Jews, a world he also did not understand. So he learned. He observed. He made a brief visit to Poland in 1926 and was exposed to the reality of pogroms and ghettos (his word for shtetls). Who would not want to join him on his journey?

In 1929, he began to familiarize himself with the London Jewish community of Whitechapel. Then he traveled to Poland, Russia and Romania. He described observant and secular Jews, Zionists and anti-Zionists, Torah scholars, yeshivah students. From all that he observed and experienced, Londres concludes “the passion for learning is uniquely Jewish,” and links this passion as “undoubtedly the real mystery of Israel and the secret of its survival.”

He discussed the dangerous circumstances of Jews living among hostile nations in 1929. “The Jew,” he writes, “is guilty of one crime; that of being Jewish.” He elaborates, “A Pole or Russian chases a Jew from a pavement as though the Jew who is passing by, is stealing his air.” Londres travels as well to Palestine to witness and observe a “metamorphosis: the cowering Jew of the ghetto now holds his head high … he finds the wandering Jew in Jerusalem.”

Londres’ translator, Helga Abraham, writes, “Still widely read in France, the book came to my attention when the Hebrew translation was published in 2008 (Nahar Books). Surprisingly, I discovered that no English translation was available. An English translation had been published in 1932 but soon was out of print. I use the word surprisingly because it is hard to read this work without being arrested by its enormous significance – as a unique eyewitness account by a non-Jew of a pivotal period in Jewish history, as a major literary work in itself and as a masterful example of journalism at its best.”

Let me take you through some of his journey. In the opening chapter, “A Bizarre Personage,” he describes meeting in London the Jew who would squire him on his journey – a Polish Galician rabbi on a fundraising mission in London.

Londres wrote, “But I had to begin in London. Why? Because England, 11 years ago, had proclaimed to the Jews the same words that God, sometime before, had proclaimed to Moses on Mount Horeb,” assigning him the land of milk and honey.

This time the proclamation had come from Lord Balfour. Londres records both proclamations adding, “England knew how to defend its interests better than God His: God had given Palestine and Transjordan in one stroke. Lord Balfour kept Transjordan.” 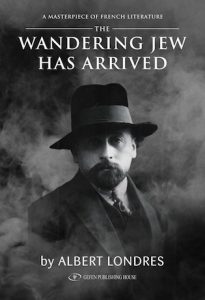 Londres writes of the 1917 Balfour declaration as well as the betrayal of the Jews following the declaration, because, although the San Marino conference legalized the promise, by 1922, 78% of the British Palestine mandate was severed from becoming a potential Jewish area. And, only 10 years later, in 1939, unbeknown to Londres, who died in 1932 in a fire that broke out on the boat returning him from Shanghai, the slaughter of Europe’s Jews began.

It is all forecast by him, as he describes Jewish history to that time and modern Jewish history from the days of Theodor Herzl (1860-1904). Herzl became a journalist in Paris, where he witnessed the Dreyfus Affair. He wrote a book called The Jewish State. He was particularly shocked by hearing the cry, “Death to the Jews” in Paris, particularly in France where, “if the suspicion that rested on an individual (Alfred Dreyfus) was projected onto all, it meant that a Jew, even in this privileged country was not in his own home.”

Herzl set out to convince monarchs and leaders to establish a home for the Jews. He visited heads of state, royalty and philanthropists, and reunited Israel as a nation, in Basel, for the First Zionist Congress. In London, 10,000 Jews came to hear him. In Vienna, another 10,000.

His schedule was hectic, his leadership challenged and he succumbed to illness at age 44. Londres notes: “Herzl is dead. His dream lives on!” Londres writes, “Three thousand two hundred forty-seven years after Moses, he succeeded Moses.” And, “He awoke a people that had slumbered for nineteen centuries.”

And so, Londres embarks on his mission to describe “the state of the Jews in the world to the French.” In London, he speaks with immigrant Jews and recognizes that, in countries like Poland and Romania, due to antisemitism, “A Jew over there is always a Jew. He may be a man, but he is neither a Romanian nor a Pole. And if he is a man, he must be prevented from growing.”

Londres places into historical perspective the Lord’s designation of Abraham as the patriarch and assigning to him the land of Canaan around 1920 BCE, and the assignation of the land at the San Remo conference, also in 1920, but CE. At San Remo, the Supreme Allied Council gave England the mandate to establish a “Jewish national home” in Palestine. Londres notes wryly that from 1920 BCE to 1920 CE, “the Arabs have not stopped creating an uproar. They deny that Palestine is the cradle of the Jews.”

Londres describes the development of Jew-hatred; the loathing of Jewish adherence to the laws of the Torah, followed by the birth of Christianity and then dispersion to hostile nations. They were ghettoized, marked with yellow badges, forced to give up Judaism in Spain and blamed for cholera in Germany, whereupon they moved to Poland followed by Chmielnicki, the leader of Ukrainian Cossacks, who “passed through all the ghettos to massacre 300,000 Jews.”

The French Revolution led to greater acceptance of Jews, less so in Vienna. But Londres was familiar with the Jews of the West. He wanted to see those in the East, and journeyed to Prague and followed others to Mukachevo, in Subcarpathian Russia. Jews were driven from their homes in Moravia, Poland and Russia into misery and poverty, all described by Londres, the roving journalist.

Even in Prague, in a more civil society in the heart of Europe, he notes, “Chased, beaten, mocked, unable to leave their concentration camp, accused of witchcraft, sorcery, illnesses, their garments marked with a yellow badge, they walk stooped, pale and thin, beards flowing, down the little alleys of yore, with big strides, heads bent, toward this old synagogue. It was their sole homeland.”

What is the vision that prompts him to use the words “concentration camp” for the Jewish area they cannot leave and the yellow badge to mark them, in the year 1929?

The reader will soon enough discover what Londres began to envision. For he discusses as well the absence of Jewish rights, their lack of political power combined with the ever-increasing torment of pogroms, forced conscription and soul-destroying laws. Londres emphasizes that Jews without a land of their own create a space in which to worship and temporarily escape the travails of their wretched lives. He knows there is no future for these Eastern European Jews who happen to number six million, without including those in Germany, France and the Netherlands.

He describes the pogroms of Kishinev in 1903 and the great pogrom of 1918-1920 in Ukraine and eastern Galicia, where 150,000 Jews were murdered and 300,000 wounded. Londres notes there is no particular reason for pogroms except one: “the fundamental cause of pogroms is loathing of Jews. Then come the pretexts.” In Bessarabia, he meets a chalutz (pioneer) from Palestine urging Jews to leave their misery. Alter Fischer had survived a Cossack pogrom and fled to Palestine. Now a proud Palestinian Jew on a mission, he attempts to inspire the Jews of Kishinev. At one point, he rages, “By dint of waiting for him [the Messiah], they will all end up slaughtered. They are like the inhabitants of Stromboli, waiting for the volcano to erupt.”

In contrast to “the wild Jews of the Marmarosh Mountains, the frightened Jews of Transylvania, of Bessarabia and of Bukovina, the begging, beaten Jews of Lwow” stands Warsaw, which is, in Londres’ words, “the Jewish queen of Europe.” Three hundred and sixty thousand Jews – but living in a country where, “One of the main pillars of Poland’s political program is to ‘crunch the Jews.’ A Jew cannot work for the government, or the army, or a university.”

Londres’ descriptions of the depth and intensity of Jewish life reflect an admiration of the commitment to study and education. But, he worries. His travel companion from Prague, Ben, offers these words, “The Jews of Russia? They know they are enjoying a truce now. Bolshevism has brought them peace. But every regime that follows Bolshevism will bring them war. And they will pay the price. It will be even worse than Petliura’s pogroms. Everyone knows this and it will be ghastly. In Poland? The situation is worse than it’s ever been. In Romania, the antagonism is blatant. In Czechoslovakia, there is neutrality but also neglect. That’s the picture. Who wouldn’t want to get out?” Ben adds, “All of us here are not at home. But we are no more than guests wherever we live.” It is 1929.

Londres travels to Palestine on a vessel, the Sphinx. He exclaims, “Here is the sun! I left Warsaw in the year 5690” (on the Hebrew calendar). “Now I enter year 10” (roughly a decade after the Balfour declaration). Londres exults in the discovery of “Herzl Street! Edmond de Rothschild Boulevard! Max Nordau Street! The synagogue, the main monument in the process of being completed, seems to say it all. It is like a flag, floating over a camp. The sole, unrivaled flag. No crosses in its shadow, no minarets in its radius. Just as when the Temple dominated Jerusalem, before the Church of the Holy Sepulchre and the Mosque of Omar.”

In discussing the defeat of the Ottoman Empire and its 400-year occupation, Londres states simply, “Victory came. England puffed its cheeks and exhaled. The Arab kingdom vanished. Israel took its place.” He writes, “There is no point labouring over historical texts. Whether the settlement of the Jews in Palestine is called a ‘national home’ rather than a ‘Jewish state’ does not alter the fact. And the fact is this: this time, the Jews were arriving not as beggars, but as citizens. They were no longer asking for hospitality – they were taking possession of the land. They would no longer be a tolerated people, but equal.”

Londres’ remarkable work – of a period of time wedged in between two world wars, the latter resulting in the destruction of European Jewry – deserves a wide readership. Londres, the journalist, captures the essence of Jewish life and foreshadows what is to come through his awareness that Jewish survival is not possible and that the wandering Jew is destined to return home.