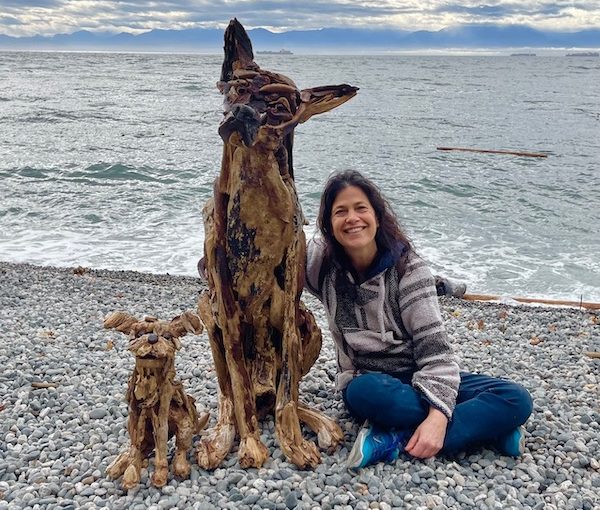 “Working with driftwood has given me a great appreciation of the power and beauty of nature. The shape and colour of every stick of driftwood hints at its history. Maybe a root had to bend around a rock while it was growing, maybe sand and water smoothed its edges over a period of many years. Then,” said artist Tanya Bub, “I combine all of these diverse natural sculptures to create an animal or person that looks alive because it borrows from the evident life forces that shaped the wood. There is something almost magical about extending the life of once-living wood by turning it into art. I’ll keep making driftwood sculptures as long as I am able.”

Victoria-based Bub currently has a solo exhibition on display at the Art @ Bentall Gallery. Called Mind Games, Defying the Art Space, the exhibit – which runs to the end of the month – features life-size works of animals that occupy air, land and sea.

In addition to the Art @ Bentall show, Bub has two separate outdoor installations of her sculptures. A large driftwood cat can be found at Kits beach (at the corner of Whyte and Arbutus) and a driftwood “giant” lives between Wreck and Oasis beaches (at the corner of N.W. Marine and Agronomy).

Bub studied oil painting and ceramics at Emily Carr University of Art + Design, and did figurative work based on life drawings. She has a degree in fine arts from Emily Carr, as well as a degree in the philosophy of science from McGill University in Montreal. She worked as a computer programmer for a couple of decades and had her own website development company. The finding of a piece of driftwood during a walk on the beach was a game changer. Since 2019, she has been making her sculptures depicting various creatures, including the occasional human.

“I came to Victoria in 2003 with my husband and daughter to be near my mom,” Bub told the Independent. “I wanted a second child and realized I needed family and community nearby to raise a family with grace. I passionately loved art as a kid but shelved it as a young adult to pursue a more practical career in programming. Now that my kids are all grown up, I’m allowing myself a second childhood and spend about 12 hours a day creating art with absolute abandon!”

Also on Bub’s CV are two physics books that she co-authored with her father. While perhaps not immediately evoking any connection with her artwork, Bub explained, “Both the relativity and quantum mechanics books begin with a simple premise and extend from there with small logical steps, building complexity bit by bit, to tell the tale of the universe. My sculptures also all begin simply, by combining one piece of wood with a second. Then another is added and another, eventually resulting in a complex unified form made up of a thousand different pieces, that tell a unified story.”

And part of Bub’s story is her Jewish heritage.

“I’ve always identified strongly with Judaism, which for me is more of an approach to life rather than strictly religious beliefs,” she said. “My grandfather, Percy, was the embodiment of Jewishness. He had an irrepressible curiosity and an almost childlike joyfulness, which allowed him to marvel at and appreciate the simplest things. That, combined with a deep respect for intellectual pursuits and, above all, the high value placed on family, was at the core of hisJudaism. These ideals inform my approach to art, physics, family and life in general.”