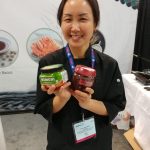 Kimchi seems to be the latest kosher craze. Here, Yeun Sun Shin, manager of South Korea’s Dongbangfood Oil Co. Ltd., shows off some of the company’s products at Kosherfest, which took place Nov. 15-16 in New Jersey. (photo by Dave Gordon)

Jewish fare extends well beyond the traditional Ashkenazi knish, kneidlach and kugel. Kimchi is the latest kosher craze, at least evidenced by the throngs of those who sampled it at Kosherfest, the annual food exhibition, which this year took place Nov. 15-16, at Meadowlands Exposition Centre in New Jersey.

For the uninitiated, the Korean staple is a cabbage-based food that contains white radish and spices.

Kosher-certified Koko’s line also includes gochujang (fermented red pepper paste) and doenjang (fermented soybean paste). Ziporah Rothkopf, Koko’s chief executive officer, not only boasted that her creations were the first of their kind in the kosher world, but that they were also among Kosherfest’s “best product award-winners,” and that she matched mainstream kimchi’s flavorings without including the usual shrimp brine.

Kosherfest, explains its website, “gives manufacturers, distributors and suppliers of kosher-certified products and services the opportunity to reach thousands of mainstream and independent kosher trade buyers from across the globe.”

The exhibition hall contained the expected offerings, but with a twist: hummus, including chocolate and orange-flavored; myriad wines, including ones called Moses and Unorthodox; artisan cheeses galore; endless new fruit beverages and sweets. There was even kosher toothpaste, SprinJene, which, unlike other toothpastes, say its spokespeople, doesn’t contain traces of animal enzymes, a no-no in the kosher world. (Non-Orthodox Judaism allows the consumption of any toothpaste.)

Australia’s MC Foods came to show off their boutique salad dressings and marinades, with the hope of finding a distributor in the Americas. From Russia came Baltika beer, said by its spokesperson to be the second bestselling brew in Europe, behind Heineken – the company produces five billion litres a year and each of the 17 beverages in the brand has kosher certification, even though beer generally does not require it.

However, contrary to popular belief, nori, which is used in sushi, poses a unique kashrut obstacle, even if it contains “100% seaweed.” Rabbi Binyomin Y. Edery, the mashgiach of Kosher Japan, explained that kosher nori, despite being a vegetable from the ocean, requires a special process, as well as rabbinical supervision. Unbeknown to many, seahorses (not kosher) and various non-kosher fish eggs become intermingled with the seaweed and must be filtered out for the seaweed to be deemed kosher, a process that is not done at non-kosher manufacturing plants.

The workaround for the kosher world, said Edery, is to harvest the seaweed in a certain two-hour window prior to daybreak, when the waters are coldest and the creatures are least likely to swim.

Moving from ocean water to bottled water from the Czech Republic’s Fromin, which is collected from an artesian well 275 metres deep, and is sold in glass bottles that can cost up to $35 US for 1.5 litres. Available in North Africa and Europe, the kosher-certified company sought a North American distributor.

According to chairman Martin Landa, although water does not require a hechsher (kosher certification), he said many consumers want to be doubly assured there are no treif (non-kosher) additives or non-kosher products made in the bottler’s vicinity.

From Betula Pendula, also in the Czech Republic, comes goat colostrums – the fluid secreted by female goats right after giving birth, which is used in skin cream and immune-boosting pills.

In other quasi-milk news, Israel-based Mashumashu, makers of vegetarian, dairy-free artisan cheeses, including cheddar, gouda, mozzarella and feta, showed off how their products melt easily on a pizza, and boasted that few people could tell the difference between the real deal and their cheeses.

Meanwhile, the gluten-free trend has caught on with dozens of Kosherfest’s exhibitors, including Soupergirl of Washington, D.C., run by former comedian Sara Polin. She said she “sought a healthy, kosher and delicious soup” with “only ingredients you can pronounce,” so she made some. Among her company’s many products are curried split pea apple kale, lentil butternut squash, and beet gazpacho. She has been featured in the Washington Post and O, The Oprah Magazine.

Also on the gluten-free train was Florida-based DelaRosa, whose executive vice-president Yehudith Girshberg claims to be the only kosher, gluten-free and organic oat producer. They also make organic wines, vinegars, olive oils and tahini.

It appears as though the kosher world will soon be indistinguishable from regular supermarket fare, with the availability of kosher pepperoni and “cheese” pizza, kosher “facon,” kimchi and even duck sausage. If things continue on this trajectory, in the near future, there may be little kosher food makers can’t successfully imitate.