There’s something comforting about reading a thriller writer whose novels you’ve enjoyed in the past. You know exactly what to expect, and yet the pages almost turn themselves. Given, however, that we’ve been living through a real pandemic for almost two years now, it might feel “too close to home” to pick up a Daniel Kalla – who writes about mysterious diseases that run rampant, plagues that resurface, surging deaths from opioids and other such things – but, somehow, he makes it fun rather than depressing. His latest, Lost Immunity (Simon & Schuster), is a great read. 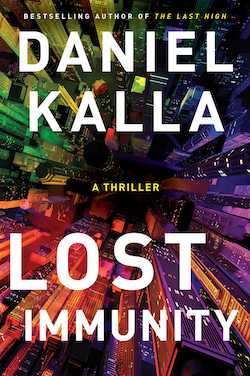 It helps that Kalla is a real medical doctor. An emergency room physician here in Vancouver, he knows that of which he speaks and can relate complicated information without sounding didactic. And there’s always what to explain in his books. In Lost Immunity, the lessons are particularly relevant, about how a bacteria spreads, the challenges of contact tracing and containment, the benefits and side effects of vaccines, the concept of herd immunity, etc., etc. But he does all this while being completely entertaining. Readers of Lost Immunity will have an idea of what Dr. Bonnie Henry and her team have been going through these last many months – minus (I hope) the human killer element.

Lost Immunity features a smart and likeable protagonist in Lisa Dyer, Seattle’s new chief public health officer. In a community health forum about a law mandating immunization for middle-school girls and boys with the latest HPV vaccine, Dyer takes on the doubters – members of “the ‘vaccine hesitancy’ community” – calmly and compassionately, with science always as her guide. Within this community are her own sister and father, so she’s had much practice.

As exhausting and frustrating as the forum is, Dyer’s job gets more challenging even before the Q&A is over – “her phone buzzes on the lectern. She can’t help but glance down at the health advisory from her office that pops up on the screen. ‘Four dead from meningitis. All attended the same local Bible camp.’”

The campers are children and teenagers, and the death rate rises quickly. (I admit to having skimmed the parts about dying kids, as they added a little too much realism for me.) Dyer and her colleagues must try to contain the outbreak – of the same strain of bacteria that caused 35 deaths in short order in Iceland six months earlier, and for which an American pharmaceutical firm is doing final-phase trials on a promising vaccine. Dyer pressures the company into releasing the vaccine early – as the mortality rate in Iceland was 46% – and goes ahead with a vaccination campaign. At first, it seems to be working, but then some severe and fatal apparent side effects bring everything to a halt. But is it really the vaccine that’s responsible? Even if you can probably guess the answer, Dyer’s journey to get there is full of twists, as well as fascinating exchanges on all aspects of the vaccination issue.

For a review of Daniel Kalla’s We All Fall Down, visit jewishindependent.ca/could-the-plague-come-back.