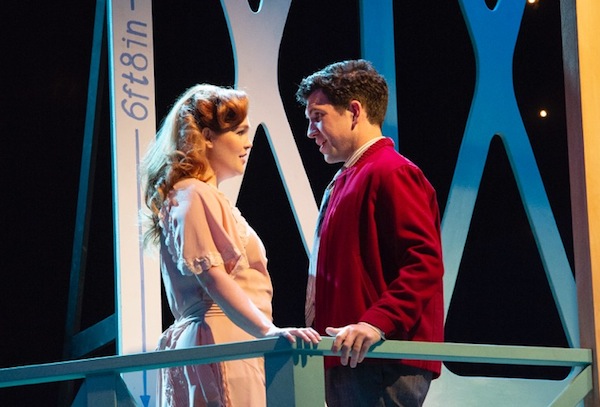 So ingrained in popular culture is Frank Capra’s It’s a Wonderful Life that many Jews probably make it an annual tradition to watch the 1946 film. This year, there is also the chance to see a musical adaptation of the classic, in which the angel Clarence is assigned the job of trying to save Bailey Building and Loan owner George Bailey from committing suicide on Christmas Eve, after there is a run on the bank and George faces the possibility not only of financial ruin but of believing his life has been a waste.

Patrick Street Productions presents the musical version by Peter Jorgensen, with arrangements and orchestrations by Nico Rhodes, at the Anvil Centre Theatre in New Westminster from Dec. 19 to Jan. 5. The show is the only ticketed event of Winter Celebrations, free daily performances by professional artists, singers and musicians at the Anvil Centre until Jan. 5.

“Mr. Potter is the antagonist of the piece,” explained Aberle. “He owns practically everything in the small town of Bedford Falls, other than the little Bailey Building and Loan Society that George Bailey’s father founded and that George continues. Potter hates the Building and Loan and does everything he can to crush it because it helps working people to save and buy their own homes instead of having to rent from him and live in the slums he owns.”

While Cohen and Aberle are new to the show, Palm played Mary in the 2018 Patrick Street production at the Gateway Theatre. As an aside, she said, “I also auditioned for the original production in Chemainus so many moons ago. I am so happy it all worked out the way it did. I truly believe it was the right fit for me at this time in my life. I have so much more personal growth and experience to bring to the role of Mary.”

Never wanting her acting to be a copy of someone else’s work, Palm said she has not seen the movie in its entirety. “I have seen some clips,” she said, “but not enough to develop a multifaceted character. Peter has written a great script and all I need to bring Mary to life is in the text. The musical aspect is completely different from the movie, and I think a beautiful addition.”

About her character, Palm said, “I appreciate Mary’s faith in community and her love for her family. She’s really strong and an anchor for George. When she wants something in her life, she goes after it. She’s the matriarch and heroine of the story. She comes through for her family and for her community when times are at their worst.

“I also appreciate her love of the simple life. In complex times like ours, and when I find my ambition too great, it’s people like Mary that remind me I can be happy and grateful for what I have, what I have worked so hard to create.”

One of Palm’s favourite scenes is “the moment right before we meet Clarence,” she said. “George is on the bridge and he’s deciding the fate of his own life, the same bridge where so many of his life’s highlights happen. It often makes me weep backstage. It’s difficult to think of people who carry the weight of the world with them, feeling isolated and alone, especially around the holidays, but the reality is the troubles of the world do not stop around those times and are in fact amplified for people who are struggling with depression and financial hardship. It’s a beautiful reminder how important it is to reach out to those around you, be a light in their lives. It only takes one person, one gesture to change the outcome of the lives of many.”

For her part, Palm is grateful to be working with the cast and especially Aberle, who happens to be her father-in-law. “Working on a show that has to do with family makes me long for family during the holidays and it is a gift to work with him,” she said.

Of the Christmas aspect of the show, Palm said the story is based in community and, “while we sing some Christmas carols, the heart of the piece is a very human story of how communities can overcome hardship by coming together around the holidays to help those who need it most, to support each other and to celebrate life. It touches on how faith can be a guiding light, but, ultimately, it’s in our own hands. Our daily work, prayer and decisions can change our own lives and people around us.”

While acknowledging that the story “seems to be somewhat synonymous with this season,” Cohen said it’s “the story of a stalwart man who continually puts the needs of his community members above his own. He learns that the value of life is not determined by monetary gain or ambition but rather the positive impact you have made on the lives of others. Even though we like to watch this story around Christmas time, it is not a story about any one holiday, but rather a family man who learns how to be a mensch.”

“It’s a Wonderful Life is about the importance of family, fairness, justice, courage in resistance to oppression and people sticking together in hard times,” he said. “It celebrates the human spirit and the importance of individual action and responsibility. While it’s true that the climactic scenes of the story are set at Christmas time and that our production (like perennial TV broadcasts of the film) is coming out at that time of year, I’d say (with director Frank Capra himself) that it’s not a Christmas story. To quote Capra: ‘I didn’t even think of it as a Christmas story when I first ran across it. I just liked the idea.’ In a 1946 interview, Capra described the film’s theme as ‘the individual’s belief in himself.’

“It happens that several of the writers who were involved with it were Jews, or of Jewish descent,” Aberle added. “The original short story, The Greatest Gift, was by Philip Van Doren Stern, whose father was of Bavarian Jewish extraction, and the writers who contributed to the film screenplay included Clifford Odets and Jo Swerling, both Jewish, and Dorothy Parker, whose father was a Jew.

For tickets to It’s a Wonderful Life, call 604-684-2787 or visit patrickstreetproductions.com. The show is recommended for ages 9+.