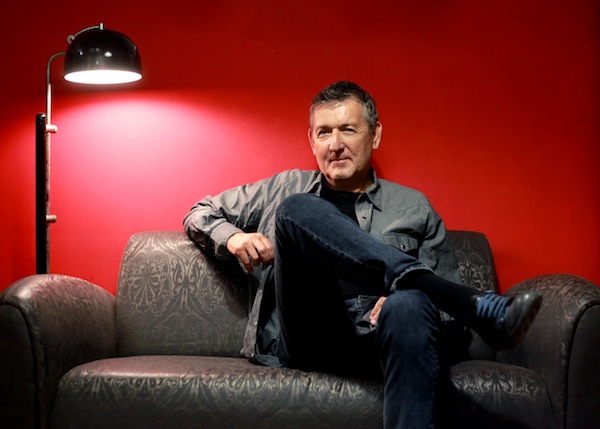 Yoni Rechter will be in Vancouver to perform for Yom Hazikaron and Yom Ha’atzmaut. (photo from Jewish Federation of Greater Vancouver)

“I love to know the world through music, and music has brought me to many places …. When I come and play and then I also make connection with the place, I prefer it to being the usual tourist. So, I’m glad I have the opportunity to come back to Canada after so many years … especially to Vancouver, that I heard so much about it,” Yoni Rechter told the Jewish Independent in a phone interview.

Rechter headlines the community Yom Ha’atzmaut celebration May 8 at the Chan Centre for the Performing Arts. While he has toured around the world, he hasn’t ever performed outside of Israel on Israel’s Independence Day. So, why now?

“There are two artists,” he said, “who were previously in this concert – Nurit Galron [2013] and Shlomi Shaban [2018] – they are both friends of mine, I work with them. Each one of them told me how nice it was to be there at the Yom Ha’atzmaut event, so I got good recommendations.”

Since he wrote his first song more than 50 years ago, Rechter has become a virtual icon of Israeli music. The composer, pianist, singer and arranger has created music for solo performances, bands, theatre, film, symphony, dance and opera. He has more than a dozen albums and has collaborated with a large portion of the who’s who of the Israeli cultural arts scene. Yet, he remains humble.

“I worked with the right people. I mean, people that I had the opportunity to learn from them, from the beginning of my musical career,” he said of his success. “I was first in the group Kaveret – you know, Poogy? By the way, we performed in Canada in ’76. We were in Montreal and Toronto and Winnipeg, and I still remember the temperature in Winnipeg. I think it was in winter; it really was the lowest temperature I ever felt. Anyway, then I worked with Arik Einstein, then I worked with Yossi Banai … and then I had the opportunity to work with very important theatre directors, like Hanoch Levin, Nissim Aloni and Miki Gurevich, and, also in movies. Because this is a small country, if you are willing to work, you can do various musical activities…. I had a lot of people to learn from, and really great, great artists.”

He said Israel is different than the United States or Canada with regard to the concept of celebrity. In Israel, he said, “We grew up very simply, and I go every day to swim. It’s not that I live in a protected house and I have bodyguards. It’s not this type of culture in Israel, first of all, but still there are people in Israel who might use their publicity for power or this kind of thing, but my character, I feel that I’m a musician, it’s the music and not me…. I feel that I have what to say in my music, but I never speak about myself; nobody knows about my wife, about my children, my private life. I’m really not into doing something with it, and it’s many years like this, but, I must confess, that I’m also not required by people or by journalists to speak about my personal life. Really, people accept me as I am.”

Rechter almost didn’t become a musician. When he was about to go into the army, at age 18, his father had what was probably the biggest architecture firm in Israel at the time. Even though his parents separated when Rechter was very young and he didn’t live with his father, he said it was a big decision as to whether to follow in his father’s footsteps. But, also, he said, music came easily to him.

“You know, I was just sitting at the piano and I composed, everything flowed, so I thought maybe life should be more difficult, and I should go to places that are more requiring of effort,” he said. “And this feeling I had, I was sure I was going to be an architect, but, in the army, I played in a military group of the artillery … and, when I finished the army, I thought to go to study architecture but then I got a telephone call from the members of what was going to be Kaveret group (Poogy group), and they called me for an audition. I heard the music and I fell in love. In the end, it came out to be [that I became] pianist of this group and a member of this group that changed … my career…. I have a brother who continues my father’s legacy.”

As to music and the projects he takes on, Rechter said there are a couple of factors he considers, notably the seriousness of the request and whether he has something to contribute musically. He gave the example of the Israeli Opera, who asked him to create a work for them, which will play again next year. He based the opera, Schitz, on the play by Levin.

“To write an opera,” he said, “it’s a year of 12-hours-a-day work; it’s really very [intensive]. It was an 80-minute opera, symphonic – I made all the arrangements and orchestration and I worked with the singers; it’s a huge work. It takes one year to do it, so, the first condition is that I know the project is serious.

“I have to find the right text,” he added, “because I really connect it to lyrics, to text, and I feel I have something to say in this. It’s a process. So, I start to improvise on this and I see if I have something to say musically. And, when I feel it’s all connected, I start to work on it. For example, the other [opera] … it was by David Grossman. Itamar Pogesh Arnav, it’s called, Itamar Meets a Rabbit. It’s a for-children opera, we made it with the Israeli Philharmonic. Of course, David Grossman, I knew he’s a very interesting man and I can find a way to connect with him, to communicate.”

Rechter said it is hard to define “Israeli music.” From the state’s inception through the 1970s, he said, “before the great internet and … we became one global ‘forum’ … [Israel] developed its own voice, which was, I would say, influenced by Russian music, from the immigrants that came, and also by music from the east, from Sinai, from Jordan, from all our neighbours. I think I grew up with influences of this spirit – sometimes I liked it, sometimes I didn’t like it. It depends on the people; for example, there was Sasha Argov, who was a very famous composer, and I really liked his music, which was very rich harmonically. Today, I think, after this explosion of communication, I don’t think it’s different from other places.”

That said, Rechter singled out some Israeli jazz performers, like Avishai Cohen, who is now based in New York, and others. “So, there is something here,” he said. “I think that living under pressure all the time [has something to do with it] … your life, all the time, is in danger because you don’t know when the next missile will fall in Tel Aviv. In my life, it has happened already two or three times…. Last week, there was one missile or two that fell near Tel Aviv. So, our life is, all the time, not protected, in a way. I believe it influences in a positive way our art, because we make art – all the Israeli artists – like you must survive. It gives us some very different energy than Europe, that used to be very calm.” He said, “The good artists that are serious become very known in the world [outside of] Israel.”

Music is important, said Rechter, “because it, especially in this time, I think that music should be a messenger. It has a task, and the task is to bring people back to real feeling, to themselves, to touch their souls, their energy, their spirit. Music is a force of nature, something that comes out of real creativity, at its best. Sometimes, I go to a concert and I cry from the music, it touches me so deeply. And that’s what I want to make. I don’t want to be somebody who’s going there to make lots of money; it doesn’t interest me. I want to touch people and, when it happens, for me, it’s the best prize.”

Rechter is coming to Vancouver with a band, “all of them Israeli, who live in New York” – singer Tammy Scheffer, saxophonist and player of multiple woodwinds Eitan Goffman, guitarist Shahar Mintz, bassist Uri Kleinman and drummer Shay Wetzler. “I sent them all the notes and the recordings of what I plan to play in Vancouver,” he said. “They’ll practise and we’ll meet at the beginning of May for two rehearsals n Manhattan.”

The audience at the Chan Centre can expect some of their favourites, said Rechter.

“I started to write songs when I was like 14, because of the Beatles,” he said. “I fell in love with the Beatles…. The first songs [of mine] were written in this age. I think the most famous song was – there is a song called ‘Dma’ot Shel Mal’achim,’ ‘Angels’ Tears.’ It became a song of memorial, and I wrote it in high school … with my friend who was sitting near me, his name is Danny Minster, he wrote the lyrics and I wrote the music. I tell this to you because I will sing it in Vancouver at the Yom Hazikaron memorial.”

Presented by Jewish Federation of Greater Vancouver, Yom Ha’atzmaut is supported by 46 community partners, with the Jewish Independent as the media sponsor and Georgian Court Hotel as the hotel sponsor. For the first time, there will be a party after the concert, though there is limited space available and only guests who attend the Yom Ha’atzmaut celebration may purchase tickets to the party. Visit jewishvancouver.com/yh2019.