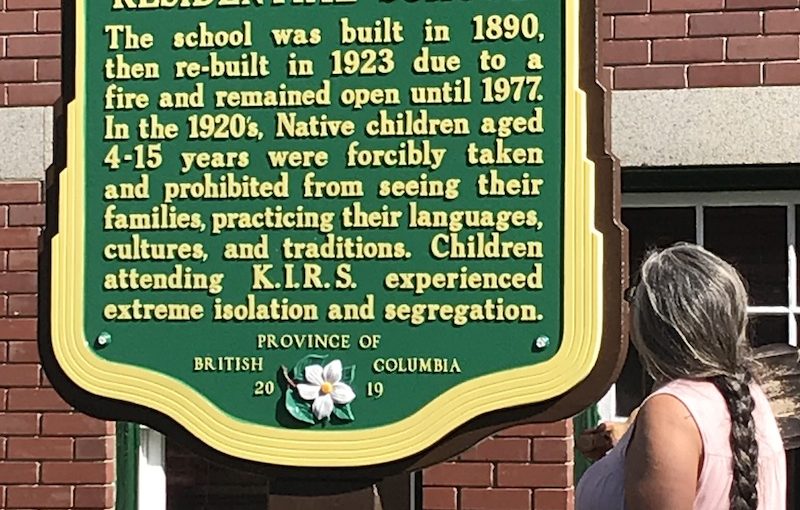 The bodies of 215 children were recently discovered buried adjacent to a former residential school in Kamloops, B.C. (photo from flickr.com/photos/bcgovphotos)

Jody Wilson-Raybould, member of Parliament for Vancouver-Granville and a member of the We Wai Kai Nation, told students at Vancouver Talmud Torah Elementary School last week that most of her family members attended residential schools and she spoke of the tragic legacy of that project, which devastated Indigenous communities for generations.

“Residential schools, these institutions, are a very dark part of our history,” she said, speaking directly to students at a ceremony organized to mourn the 215 children whose bodies were recently discovered buried adjacent to a former residential school in Kamloops, B.C. Most of the city’s rabbis were also in attendance.

“They were in existence for over 100 years in Canada, from the 1870s to 1996, when the last one closed in Saskatchewan. The last one closed in British Columbia in 1984,” said Wilson-Raybould of the residential schools. “These institutions were created by the law of Canada and run by churches. There were 139 residential schools across the country and it’s estimated that 150,00 First Nations, Inuit and Métis children attended the schools, forcibly removed from their homes, compelled to attend, and the purpose of residential schools, as stated by the first prime minister of this country, was to remove the Indian from the child, to get rid of the ‘Indian problem’ in this country.”

She added: “People have asked me, as I know they’ve asked many Indigenous peoples, how do you feel? I feel angry. I feel frustrated. And I feel a deep sense of sadness, because this is not an isolated incident. There will be more that will be revealed and we have to recognize that every Indigenous person in this country has a connection to residential schools and the harmful legacies that still exist. But I am still optimistic. Optimistic that, through young people like you … that we can make a change in this country.”

Speaking of her family’s experiences, Wilson-Raybould singled out her grandmother, who she has frequently cited as her hero, and talked of the courage and resilience her grandmother exhibited.

“Most of my relatives went to residential schools,” she said. “My grandmother, Pugladee, was taken away from her home when she was a very young girl and forced to go to the Indian residential school St. Michael’s, in Alert Bay. She faced terrible violence at that school, but she escaped from that school and she made it home and she is the knowledge keeper in my nation.”

Emily Greenberg, Vancouver Talmud Torah head of school, welcomed guests in person and online, expressing empathy for Indigenous Canadians, faced again with the reminder of this country’s past.

“Their wounds have been reopened once again and their suffering renewed,” she said. “Today, our community gathers to grieve with them and open our hearts to their struggles.”

Rabbi Dan Moskovitz of Temple Sholom contrasted the lives of the children buried in Kamloops with the lives and educational experiences of the Talmud Torah students attending the ceremony, who, he said, “are immersed in their own language and culture and traditions” – the very things Canada’s residential schools system was designed to extinguish in Indigenous young people.

“Our hearts break today not only for the loss of life,” said Moskovitz. “They break for the loss of childhood, the loss of innocence, the loss of joy, of play, of family, of heritage that was stolen from those children by the misguided aims of our nation. It was a different era. It was a different time, but if our people, the Jewish people, have learned anything from our history of trauma and persecution, it is these words: that those who do not study history are bound to repeat it. Echoed by the warning of the Jewish people from the Holocaust, from the Shoah – never again – we have learned, and we know in our souls, that the greatest tribute we can offer these children and their families is not words of condolence, but acts of conscience. The purpose of prayer is to lead us to action, to make our prayer real, not in heaven but here on earth.”

Rabbi Jonathan Infeld of Congregation Beth Israel said that “the children who we are remembering today were forced to go to schools and to a specific school that ripped away their culture, attempted to take away from them their language, attempted to take them literally away from their families.” Addressing the students, he emphasized the message Moskovitz shared: “Today, we are remembering children who had the exact opposite of the opportunities that you have.”

Or Shalom’s Rabbi Hannah Dresner expressed the unity of Jewish, Indigenous and all peoples. “We share a destiny as co-inhabitants of this land and because we are of the same holy stuff, the same flesh and blood and the same God-breath,” she said, encouraging members of the Jewish community to “respond not just in our sentiments but through ongoing engagement service and grace.”

Dresner said: “Justice is what love looks like in the public sphere. Loving our neighbours, our fellows, as ourselves. And so, we stand with Indigenous fellows in love, for justice, for the actualization of recovered records and supportive measures for holistic, multifaceted healing and reparation.”

Rabbi Andrew Rosenblatt of Congregation Schara Tzedeck spoke of the Jewish concept that one who extinguishes even a single life is considered to have destroyed an entire world. “Today, we remember, at a minimum, the destruction of 215 worlds,” he said. “A significant portion of these children died while trying to escape to reunite with their families. They died of exposure in the cold, the frost, simply trying to do one thing that every human being would … simply trying to return to their own families.”

Carrie Plotkin, a Grade 5 student, read the poem “You hold me up,” by Monique Gray Smith. “It was written to encourage us young people, our care providers and our educators to talk about reconciliation and the importance of the connections children make with our friends, classmates and families,” she said.

The 215 bodies were discovered using ground-penetrating radar. The Truth and Reconciliation Commission estimated that 4,100 children died at residential schools from abuse, neglect, diseases and accidents. Many were never repatriated to their families and communities and, in many cases, deaths were sloppily recorded using just a given name or a surname and sometimes even completely anonymously. Advocates are calling on the government to commit to identifying more remains and to releasing archival documentation on the schools that has remained sealed.