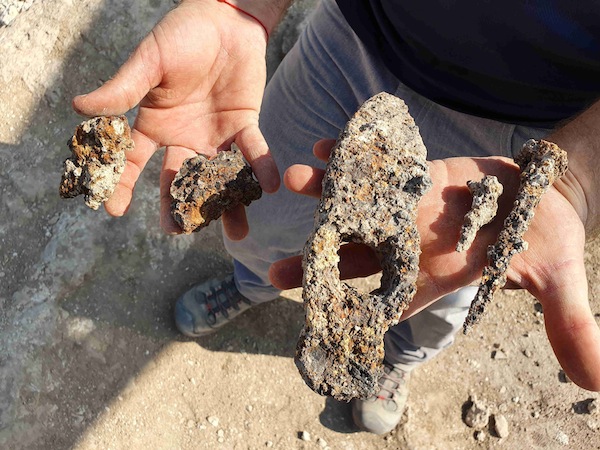 A 1,400-year-old hammer and nails, found at the ancient city of Usha. (photo by Yoli Schwartz/IAA via Ashernet)

An Israel Antiquities Authority (IAA) excavation some 15 kilometres east of Haifa at the ancient city of Usha revealed a 1,400-year-old hammer and nails, confirming that the ancient inhabitants of Usha manufactured iron tools.

The IAA’s community excavation, carried out predominantly by youth and volunteers, has exposed part of a Jewish settlement with ritual baths, oil presses and winepresses. Indications are that the primary occupation of the Usha inhabitants was the large-scale processing of the olive trees and vines they cultivated on the surrounding hills. The discovery of the ritual baths indicates that the Jewish press workers took care to purify themselves in the ritual baths in order to manufacture ritually pure oil and wine.

According to Yair Amitzur, director of the excavation and of the Sanhedrin Trail Project for the IAA, “the settlement of Usha is mentioned in the Jewish sources many times in the Roman and Byzantine periods, as the village where the institution of the Sanhedrin was renewed, after the destruction of the Temple in Jerusalem, and after the failure of the Bar Kochba Revolt in 135 CE. The Sanhedrin was the central Jewish council and law court, and it was headed by the president, Rabban Shimon ben Gamliel the Second, who presided in Usha, and then his son, Rabbi Yehudah Hanasi. Here, in Usha, the rabbis of the Sanhedrin made decrees to enable the Jewish people to recover after the war against the Romans, and to reconstruct Jewish life in the Galilee.”