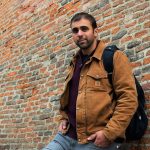 Stav Daron’s application to the Island School of Building Arts was initially rejected because he is Israeli. After public pressure, the school reversed its decision and apologized. (photo from facebook.com/stav.daron)

Now that the sawdust has settled on the controversy around the Gabriola Island-based Island School of Building Arts’ initial rejection of an Israeli applicant based on his nationality, we can assess the implications. According to various reports, the school’s manager had responded to a prospective Israeli applicant, telling him that they are “not accepting applications from Israel” owing to “the conflict and illegal settlement activity in the region.” After pressure from the Centre for Israel and Jewish Affairs, Friends of the Simon Wiesenthal Centre and B’nai Brith Canada, the school reversed its decision and issued an apology on its website.

The rejection of the student was a move that not only likely contravened the B.C. Human Rights Code – which forbids service-providers to deny services to clients based on national origin, among many other things – but served to embarrass the school. But there are some deeper layers that deserve examination here.

First, we need to ask what the role of BDS (boycott, divestment and sanctions against Israel) is in all of this. Many would interpret the school’s move as an instance of BDS. In one sense, they would be right; in another, they would be wrong. BDS entails commercial, academic and cultural boycotts, in addition to calling for divestment from companies helping the occupation and, in the most unlikely scenario, getting other countries to institute sanctions against Israel. Importantly, the academic boycott aspect of BDS does not call for targeting individuals unless, like deans or university presidents, they are representing an Israeli academic institution in an official capacity.

While it’s not clear to me whether the Island School is an accredited academic institution or a private business, I will discuss it in the context of the academic boycott since that’s what probably comes to mind for most readers.

Though detailed BDS guidelines exist, not all would-be BDS activists are necessarily aware of them. And, even if they are aware of them, they might end up applying their own standards. There is anecdotal evidence that individual Israeli academics are indeed harmed or even directly targeted by BDS. My interview with a BDS activist at Syracuse University, for an article I published in Haaretz, pointed to this kind of slippage. All this is to say that BDS may have a spillover effect – and a chill factor – far beyond its intended boundaries.

On the other hand, while the decision was ill-conceived, this same spotlight enabled a light to be shone on problematic Israeli policies. This won’t persuade groups for whom Israel can do no wrong, but the school’s initial action – which the school’s representative said was intended to stay in line with the school’s “moral compass” – may have served its aim, as clunky as the action was.

We can also ask what the role of public shaming is in propelling international change. Scholars have noted that countries can be shamed into compliance – whether to adhere to international law, to ante up humanitarian aid in the wake of a disaster or to offer debt relief. These kinds of dynamics work best when it is governments being targeted. To focus political action on an individual outside the context of any national representation, which is what Island School did, is deeply problematic. Here, I would point to the controversy around the Egyptian judo athlete rejecting his Israeli opponent’s handshake at the 2016 Olympics as a grey area. The Olympics ideally take place outside of politics but athletes are, of course, representing their country and there may be political theatre playing out on some stages, however disappointing it may be. But this was not the case with the Israeli applicant to the Island School who was representing no one but himself.

Finally, the brazenness of the act enabled Jewish groups in Canada to take swift action. The school could have quietly rejected the applicant with little fanfare, but the manager’s honest and forthright emails left no doubt as to what motivated the decision. This meant that the full story circulated quickly on media and social media, and pressure from national Jewish groups succeeded in quickly getting the decision reversed. This means that, perhaps, as painful as it was, we can be glad when actions are taken in a transparent way, making strategies around pressure and counter-pressure much more straightforward. This is ultimately a good thing for buttressing an active civil society, even if we don’t all agree on the policies being protested.