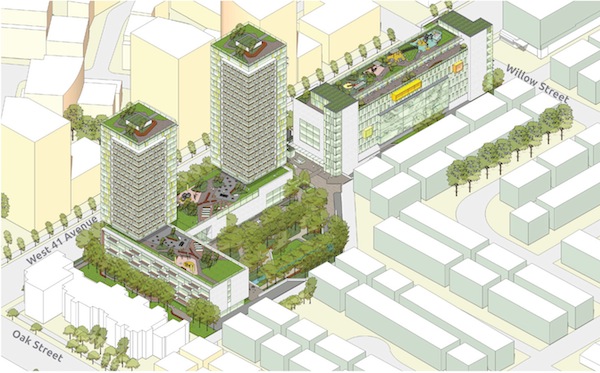 A rendering of the development that is planned to replace the current Jewish Community Centre of Greater Vancouver. (image from JCCGV)

A recently signed agreement is a significant next step in the largest infrastructure project in the history of British Columbia’s Jewish community. The deal is expected to create a new Jewish community centre, as well as at least 300 rental housing units and larger, renewed facilities for many communal institutions, replacing the existing, almost 60-year-old community centre.

A memorandum of understanding between the Jewish Community Centre of Greater Vancouver (JCC) and the Jewish Federation of Greater Vancouver was signed last month. The agreement will likely see the land owned by the JCC transferred to a new community-wide agency. According to a joint statement by the two organizations, the proposed new 200,000-square-foot “recreational, cultural and community centre [will include] new childcare spaces, more services for seniors, an expanded space for the Vancouver Holocaust Education Centre, a new theatre and more.” At least 15 not-for-profit community organizations are anticipated to be housed there, as well as updated and enlarged facilities for arts and culture, aquatics, and fitness programs. Mixed-use rental housing units included in the plan are expected to be offered at or below market value and be open to everyone.

The project will advance based on a collaborative fundraising initiative. A campaign goal has not been announced.

“This agreement is an important initial step toward acting upon the community’s vision for a revitalized JCC that would become a legacy for the Jewish community and the city,” Salomon Casseres, president of the JCC board, said in the statement. “Our board is excited to partner with Jewish Federation. We believe that this collaboration puts the project on a strong foundation for success, from a community, financial and governance perspective.”

“An opportunity like this comes along perhaps once in a generation, so we are very proud to be working closely with the JCC on this historic project,” Alex Cristall, Jewish Federation’s board chair, said in the statement. “Jewish Federation takes a broad, long-term view of the sustainability, growth and evolution of the local Jewish community, and we believe that this project will create a strong core that will ultimately allow us to increase our reach and our impact.”

Ezra Shanken, chief executive officer of the Jewish Federation, told the Independent that the collaboration is a “big win” for the community.

“Federation has always been a proponent for the concept of working together on projects that have an impact that’s beyond the reach of one agency and we are thrilled that the JCC agrees with us that this is one of those projects,” he said. “It absolutely should be common in all cities.… For me, it’s best practice.”

The new JCC will strengthen the entire community, he said, adding that the impacts will reach far beyond the Oakridge neighbourhood.

“I think the JCC has shown immense foresight and courage in coming together with us, to have the openness to work through the challenges and opportunities that exist in partnership, and I believe that this partnership will glean really great results for the Jewish community as a whole,” he said.

Eldad Goldfarb, executive director of the JCC, said working together hand in hand is the best way forward and the partnership is a natural one. The collaboration between the JCC and Federation is the largest partnership, but is part of a broader engagement process, he added.

“The master planning process of this legacy community project has involved an extensive engagement effort by the JCC, reaching out and having conversations with more than 30 Jewish community organizations, many stakeholders, donors and community members,” said Goldfarb. “The JCC, as we know it today, is home to 15 different Jewish community organizations and the new redevelopment might increase these collaborations opportunities.”

Discussions about the partnership between the two organizations have always been very collaborative, open and in good faith, Goldfarb said.

“This project is about creating a JCC for the future of the community, with more and better childcare, seniors, wellness, arts, culture and education state-of-the-art spaces, but is not limited to only that,” he said. “Our vision is to create an innovative community site which will include a brand new J, as well as a welcoming and collaborative home for many other community organizations and, of course, the much-needed large rental affordable housing towers.”

Vancouver City Council unanimously approved the JCC site redevelopment plan in September 2018. Several major steps remain in the design and planning process, as well as the raising of the millions of dollars required to complete it.