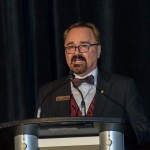 Jerry Maslowsky, executive director of Variety, the Children’s Charity of Manitoba, has a long history with the organization.

Maslowsky, 57, started off in performing arts as a teenager, in Rainbow Stage productions. Coming from a musical family, the stage was where he felt most at home.

He later became a member of a band called Special Blend and, for 18-19 years, he was with them, playing for many weddings, bar mitzvahs and graduations. He came across Variety in his early 20s, singing on the charity’s telethon in the 1980s. However, his work with them was yet to come.

A year ago, Maslowsky felt it was time to move on, as an opportunity with Variety came up. The organization’s previous executive director, who Maslowsky knew very well, was retiring.

Since Variety started as an entertainer’s charity, it was something in which Maslowsky was very interested – working with kids and giving back, as well as “ensuring that all kids are having a childhood just made sense,” he said.

The original chapter started in Pittsburgh in 1927 as an international children’s organization, the initiative of a group of 11 men involved in show business, who set up a social club, which they named the Variety Club.

Maslowsky explained, “On Christmas Eve 1928, a small baby was left on the steps of the Sheridan Square Film Theatre, with a note. The note read, ‘Please take care of my baby. Her name is Catherine. I can no longer take care of her. I have eight others. My husband is out of work. She was born on Thanksgiving Day. I have always heard of the goodness of show business people and pray to god that you will look after her.’ Signed, ‘A heartbroken mother.’

“Since efforts to trace the mother failed, the members of Variety Club named the child Catherine Variety Sheridan, after the club and the theatre on which steps she was found. They undertook to fund the child’s living expenses and education. Later, the club decided to raise funds for other disadvantaged children.”

Today, there are more than 44 Variety “tents” (described as “tents” for its circus component) throughout the world. Manitoba’s Variety started in 1978, and it has helped more than 800,000 children throughout the province, raising more than $30 million. The B.C. chapter celebrates its 50th anniversary this year; over that time, it has raised more than $170 million, every year assisting more than 1,200 children. There are other tents in Canada, with a new one slated to open in Montreal.

Maslowsky credited Gene Telpner with bringing a Variety tent to Winnipeg. He got the idea, “then called his good friend, Monty Hall of Let’s Make a Deal, and they were able to formulate a tent in Winnipeg that was really run by a lot of the people from the Jewish community in the entertainment and hotel industry – people like Mickey Levine from the International Inn and Harvey Nairn. A lot of people in the entertainment industry took a hold of this and created the organization and telethons.”

Variety’s mission is to meet the tangible needs of children with all abilities. “This means that every child does have an ability,” explained Maslowsky. “Some children’s abilities are different than others’. We basically look at every child, the abilities they have, and other abilities maybe they lack. That’s where Variety comes in, in how we can support the child as well as the family.

“When children belong here, we call them part of Variety family, because it’s just not always the immediate need we look after. We also look after ensuring the child’s and family’s needs throughout those years, before they come into 18 years old, that Variety stays a part of their life.”

Part of Maslowsky’s mandate at Variety is to reach out to alumni, “kids” who are now 36- and 37-years-old, to see how they are doing, and to bring them back as mentors for younger Variety children.

“One of the things we did that was important for me when I came back was going back to our roots of showbiz, circus and entertainment,” said Maslowsky.

He went to work, calling on his friends from his entertainment past. “So, we were able to plan a Come One, Come All – Under the Big Top event,” said Maslowsky. “I wanted it to be entertaining and I wanted people to come to an event where they could see it through the eyes of kids. And we’ve all grown up with the circus … we can relate to it. It was important to then get talent, not just dancers and speakers.” The event was held May 9.

Reflecting on his younger days, Maslowsky said, “My sister and I, we’ve always been teased as ‘the Jewish Donny and Marie.’ My sister does a lot of performing in the city and we did Folklorama [multicultural festival] for many, many years (at Shalom Square, the Israeli pavilion).”

He added, “Growing up in a Jewish family, knowing how to give and that you’re not always the best, that you just do what you can, you just be sure that you’re a giving person, that was certainly instilled into us by our parents.”