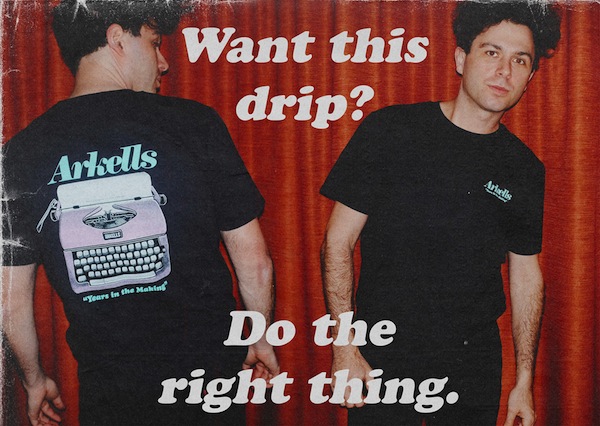 In what seems like a random act of kindness, the Canadian rock band the Arkells has put out an offer to their fans. Subscribe to a community newspaper and get a swag T-shirt from the band.

Musicians are facing their own challenges these days, as streaming services are upending the traditional royalty and revenue streams of their industry. But they are perhaps not yet at the level of near-desperation the print media sector has been facing in recent years. The advent of the internet and other factors (but mostly the internet) have made people expect for free things we used to access primarily through purchasing.

Oddly, perhaps, many of us are prepared to pay for multiple subscription services for media – Spotify for music, Netflix, Crave, Disney and an ever-growing number of video services – but most people still react to paywalls on print media by finding a free (to them) alternative. As a result, print outlets from the New York Times and the Globe and Mail to, well, the Jewish Independent have struggled to find alternative sources of revenue and the means to compensate for the reality that readers are demanding (and getting) for free what they once paid for.

In keeping with the issue-driven approach to songwriting for which the Hamilton-based band is known, it was a pleasant and heartfelt message that the Arkells – whose lead singer, Max Kerman, is a member of the Jewish community – put out to their fans.

“If you’re an engaged member of your community, you’re probably thankful for the people who report the news. And even if you’re not, you’re probably still reassured to know that someone is keeping tabs,” they write.

“Good reporting not only keeps us in the loop, but also makes sure our big wigs are held accountable – to ensure there is no sneaky biz.

“Somewhere along the way, we took this for granted. We forgot that we have to pay for this vital service, and that reporting the news isn’t free. In our own city, we’ve seen our local newspaper continue to shrink, and we worry about its future and the future of other local newspapers.”

The band invites their fans to join them in investing in “the things that truly matter.”

“Let’s start,” they write, “by supporting your local paper or a daily publication you really admire. It’s been years in the making. No more running from that paywall.”

They are asking listeners to take out a year-long paid subscription to a print or online media platform (or gift one to a friend) and to let them – the Arkells – know. Then the specially designed band T-shirt will be on its way to you.

Obviously, a gesture like this is not going to save the industry. But it is sweet nonetheless, especially to see someone without a vested interest making this case. Then again, maybe their point is that every citizen does have a vested interest in the success, or at least survival, of local media.

For the Jewish community in British Columbia … that’s us! For 90 years now, the Independent and our previous incarnation the Jewish Western Bulletin have been printing the first draft of our community’s history. At the risk of sounding self-aggrandizing, there are times when we write stories as much for posterity as for this week’s readers. We know that the archives of this paper is often the first destination for people researching aspects of our community’s history. We believe that, decades hence, researchers will see in a visit to Vancouver by a renowned researcher or an act of tikkun olam or a project by local high school students as the germ of a movement, or a way-station in the progress of an idea, that is significant in its own right but also speaks to a larger trend in our community or society. Or maybe someone will just enjoy the read. In other words, we view our work as immediate and, ideally, enduring in some manner even we cannot foresee.

While in many cities across North America, the local paper is operated by the Jewish federation, here it has been run for well more than a half-century now by independent business operators taking a not insignificant risk for the community’s benefit. Operating a Jewish newspaper was never going to be the route to riches. The remarkably small number of people who have led this endeavour over the past nine decades knew this at the outset. But the challenges of the 21st century are particularly acute.

We thank you for your support and humbly ask you to recommit to our shared enterprise in this, our 90th, year. Perhaps a gift subscription to family or friends – especially younger generations, whose engagement is critical not only for the future of our newspaper but for our community. Or simply a gift to help sustain the paper, which would mean a great deal to the small team that puts this package together each week and, we believe, to the strength and future viability of our community. Plus, you could get a cool shirt for you, your kids or grandkids if you let the Arkells know about it!