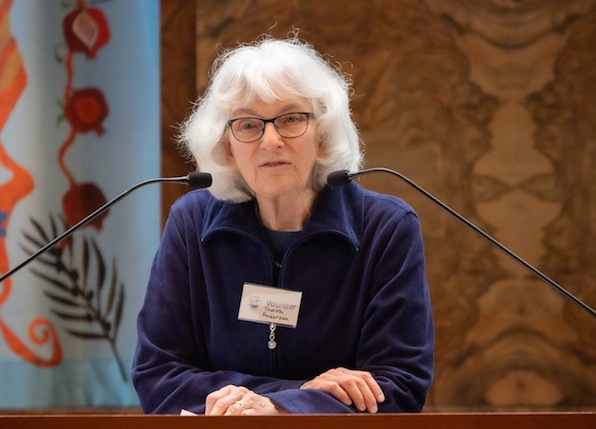 This year’s commemoration of Raoul Wallenberg Day took place April 10 at Congregation Beth Israel because COVID-19 restrictions prevented the gathering in January. The event honoured the courage of B.C. frontline healthcare providers during the pandemic.

Hosted by the Wallenberg-Sugihara Civil Courage Society, Judith Anderson welcomed attendees. She asked them to take a moment of silence to think about Ukraine and “all the victims of this humanitarian crisis, and to thank the countries welcoming refugees, especially Ukraine’s closest neighbours – Poland, Romania, Slovakia, Moldova and Hungary. In addition, let’s remember the many organizations and volunteers who are stepping forward to help.”

Anderson spoke about gratitude. “We are blessed to live in a peaceful society, where threads of various cultures are woven together to make a fabric that is stronger and warmer than any of the threads would be alone. Let’s recognize two special qualities of that fortunate fabric that we are thankful for today.

“First, we appreciate our shared land. Here in Vancouver, we are meeting on the unceded territories of Musqueam, Squamish and Tsleil-Waututh people. We thank them for sharing, and for having cared for these lands and waters for thousands of years.

“Second, we are thankful for our health care. Modern medicine has developed from diverse cultural threads, including science, people skills, systems management and the professional commitment of thousands of healthcare providers. Our routine expectations of health and longevity could scarcely have been imagined, just 100 years ago.

“And today,” she continued, “we are thankful, in particular, for the civil courage of those who have provided health care to British Columbians during the COVID-19 pandemic. They have faced a new, deadly, communicable disease with unknown risks to their own and their families’ health. They have worked to exhaustion under the most stressful conditions, saving lives and comforting families. Then, when vaccines became available, healthcare workers extended themselves yet more to immunize us all. Unfortunately, as some people have tired of public health restrictions, medical workers have been subjected to harassment and threats. And still they are there for us when we need health care, whatever the problem might be.”

Deputy Mayor Christine Boyle read the Raoul Wallenberg Day proclamation from the City of Vancouver, recognizing Jan. 17 as the day of its commemoration.

The one-hour documentary Zero to Zero was screened at the event. Filmed over 15 months, it offers an unfiltered look at what it’s like to be a healthcare worker during the COVID-19 pandemic. It follows the staff of a hospital from the moment they admit their first patient in June 2020, till after the third wave. Filmed by a healthcare worker with unprecedented access to the hospital frontline, it deals with patients during life-and-death situations, but the focus remains on the indomitable strength of the human spirit.

After the screening, the guest speakers fielded questions from the audience about what they thought of the documentary, about long-COVID in healthcare workers and about the harassment they faced and how they responded to it.

The annual commemoration is held in memory of Raoul Wallenberg, a Swedish architect, businessman, diplomat and humanitarian, who became Sweden’s special envoy to Hungary in summer 1944 and, at great personal risk, saved tens of thousands of Jews from deportation and death. He disappeared into Soviet captivity on Jan. 17, 1945, and his fate remains unknown.

Wallenberg has been made an honorary citizen of Canada, the United States, Hungary, Australia and Israel. In 2000, the Canadian government proclaimed Jan. 17 as Raoul Wallenberg Day.

The event is also in memory of Chiune Sugihara, a Japanese diplomat who served as vice-consul in Lithuania during the Second World War. He chose to act, at clear professional and personal risk to himself and his family, issuing transit visas that allowed about 2,000 Jews, more than 90% from Poland, to escape almost certain death.

Both Wallenberg and Sugihara have been designated by Israel as Righteous Among the Nations.

The Wallenberg-Sugihara Civil Courage Society, said Anderson, defines “civil courage as an act entailing personal risk or sacrifice, intended to improve or save the lives of others who endure misfortunes attributable to social context. In even the best-managed societies, some people may suffer from conflict, injustice or threats to health and well-being – such as the COVID pandemic – that are intimately tied to our social structures. And those who help despite personal risk, show the same inner strength as wartime role models like Wallenberg and Sugihara.

“In 2006,” she continued, “the former honorary Swedish consul to Vancouver, Anders Neumuller, began Vancouver’s annual commemoration of Wallenberg Day. He later envisaged a nonprofit society dedicated to honouring acts of civil courage. And so the Wallenberg-Sugihara Civil Courage Society was formed in 2013 by members of the Swedish and Jewish communities in Vancouver.”

The Civil Courage Society honours the legacy of Wallenberg and Sugihara by acknowledging British Columbians who have demonstrated civil courage and by promoting civil courage.

“To that end, each year, we formally recognize a person or group of people who have displayed civil courage in British Columbia,” said Anderson. “We also screen a film intended to get the audience thinking about the importance of civil courage and how to encourage it.”

For more information, including photos and video of the commemoration, visit wsccs.ca.