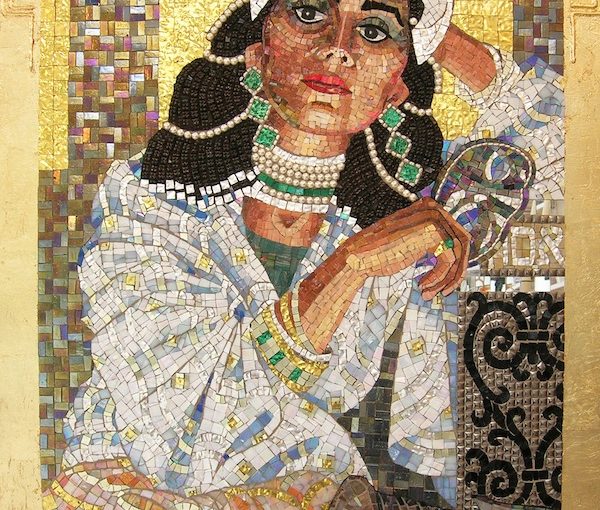 “Queen Esther Revealing Her True Identity” is the last mosaic of artist Lilian Broca’s Queen Esther Mosaics Series in chronological order. A mature and confident Queen Esther in her most expensive and beautiful attire is removing the mask – the symbol of her secret identity – revealing an intelligent and self-assured leader. On the table, a rhyton (Persian gold or silver drinking vessel) is knocked over, spilling its red wine contents; the wine symbolizing the spilled blood of the Hebrew people as planned by Haman. The plotted genocide is now averted, however, through Queen Esther’s disclosure to her husband, King Ahasuerus, of Haman’s evil design. In this mosaic, Broca notes that it is her intention to “iconize” Queen Esther as a paragon of supreme leadership, loyalty, wisdom and vision. In a patriarchal society, this unique female figure succeeded in bringing peace through accommodation, cooperation and negotiation. Her hero status enables her to become a role model for all women, then and now.

For more information on Broca and her art, visit lilianbroca.com.